By Charles Morgan and Hubert Walker for CoinWeek….. 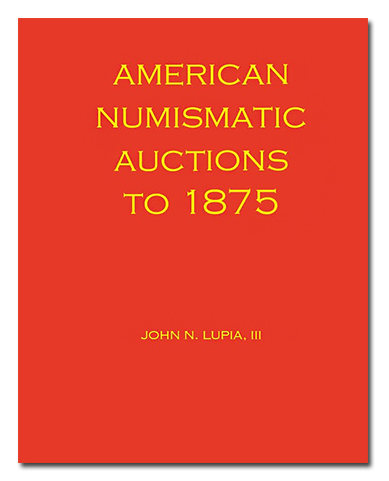 John N. Lupia III’s American Numismatic Auctions is a revised and expanded edition of Part One of E. J. Attinelli’s landmark 19th century work Numisgraphics, or, A List of Catalogues, In Which Occur Coins or Medals, Which Have Been Sold By Auction in the United States, Also, A List of Catalogues or Price Lists of Coins, Issued by Dealers, Also, A List of Various Publications of More of Less Interest to Numismatologists, Which Have Been Published in the United States, Compiled by E. J. Attinelli.

For those unfamiliar with Emmanuel Joseph Attinelli and his canonical reference work Numisgraphics, know that in the late mid-19th century, coin collecting in the United States was experiencing what some have called its first boom. Public auctions in major U.S. cities like Philadelphia and New York became an increasingly important means for dealers, buyers and sellers to acquire and liquidate holdings.

Attinelli and his unnamed co-author (widely believed to be Daniel Parish, Jr., author of an article published in 1866 in the American Journal of Numismatics entitled “List of Catalogues of Coin Sales, Held in the United States from 1828 to the Present”) set out to document a chronological history of all known sales.

The earliest sale they documented was an auction of ancient coins & copperplate engravings belonging to the estate of the late Benjamin H. Watkins of Salem, Massachusetts. (82) From this starting point, Attinelli documented more than 400 sales of numismatic items (excluding paper money and numismatic literature) through to Attinelli’s present day (in this case, 1876).

For more than a century, Attinelli’s work has supported our understanding of the development of modern coin auctions and served as a history of the hobby in the early decades of our country. Lupia, with his new volume, asserts that Attinelli’s Numisgraphics is woefully incomplete and sets out to improve the work, as much as possible, with hundreds of additional entries.

— The first American auction offering numismatic literature was held in 1738.

— The first American auction offering medals was held in 1758.

— The first American auction featuring Roman coins was held in 1770.

— The first sale exclusively dealing with coins was held in 1813.

— The first American auction dealing exclusively of Roman coins was held in 1830.

These findings paint a picture of a coin collecting hobby on the American continent that was much more robust than previously thought.

Not only do Lupia’s revelations paint a broader picture of Numismatics, but they also serve those interested in social history, especially the ways in which the American professional class spent its leisure time.

Lupia acknowledges that even this new revision has built-in limitations.

Those expecting in-depth, lot-by-lot descriptions of 18th and 19th century sales should be forewarned that early American sales rarely, if ever, contained specific information about particular coins. Most of Lupia’s new listings–as well as Attinelli’s originals–preserve only the size and scope of the numismatic material offered.

It’s not uncommon to see a listing so described:

“This was an art auction but also contained a collection of coins and medals, in gold, silver, and copper.” (March 29, 1827, Michael Paff Collection, New York- Attinelli #-57.)

Some might disagree with Lupia’s criteria for inclusion and find details too sparse to form a definitive opinion. In any event, Lupia doesn’t hide behind an arbitrary system of cataloging auctions, but instead provides researchers with the necessary tools to conduct further research themselves.

Lupia accepts that his work will solicit constructive feedback and criticism. “When undertaking new research never before ventured,” he writes, “it is inevitable that some few entries included here need to be weeded out and supplanted by new ones that have been verified and confirmed by subsequent investigations….”

Furthermore, he acknowledges that research so far has yielded results from only a few American cities, and that by sheer statistical probability, numismatic sales had to have occurred in cities not prominently featured in Attinelli’s work.

Lupia’s American Numismatic Auctions to 1875: Volume 1 is a highly specialized volume that deals with a seminal period in American numismatic history. It’s not for everybody, and the insights it contains won’t prove very useful to the majority of hobby participants. It is, at its heart, an academic work, constructed for the sake of knowledge and beneficial primarily to those who explicitly seek what it provides. But it does give us something more. It preserves that which has proven to be much more fragile and fleeting than the tiny metal discs that have so captivated collectors for centuries.

Much has changed in the way coins are bought and sold, commodified, studied and appreciated. That the thread connecting contemporary coin collectors to past generations goes farther back than we knew is revelatory.

John tells us that the second volume is nearly complete. Part two covers the remainder of Attinelli’s 443 coin auction listings and includes more than 200 new coin auctions–including sales of stocks, bonds, securities, and scrip. The second volume, he says, “will be a more diverse store of information on auctions in all numismatic fields than anything before published.”

CoinWeek will update this article when the second part is published.

Orders for this book can be placed at John Lupia’s website.