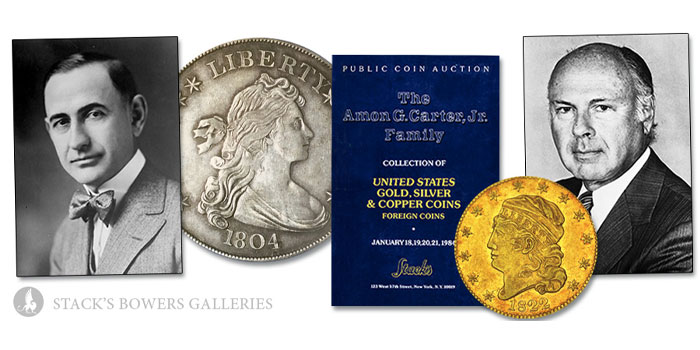 Born on December 11, 1879, Amon Gamaliel Carter, Sr., was a Texas oilman in the traditional style. Building on his success in petroleum exploration, he became publisher of the Fort Worth Star-Telegram and a co-founder of American Airlines. By the 1930s, he was one of the most prominent citizens of the Lone Star State.

In the 1930s, while attending a Rotary Club meeting, Carter had a chance to talk with fellow Rotarian B. Max Mehl, who learned that Carter had been born in 1879. Soon thereafter, Mehl presented him with a $2.50 gold piece of that date, piquing Carter’s interest, and leading to the natural inquiry as to what other coins of that year might be available. Soon Carter purchased a rare 1879 Flowing Hair Stella. The rest is history, as they say.

Carter went on to become a major customer of Mehl and acquired an incredible collection of rarities, among which were an 1804 silver dollar, trade dollars of 1884 and 1885, and the half eagle of 1822. Carter had an arrangement with Mehl whereby after each of Mehl’s “auctions”–actually, mail bid sales–there would be pieces that either received no bids at all or received bids that Mehl considered to be bargains. Carter bought these pieces in one fell swoop, often not bothering to look through them, and he stored them in boxes in his office. Years later, some of the auction “residue” boxes from Mehl remained in the care of Amon, Jr., Carter’s son, and still had not been examined. I had the pleasure of flipping through some of them.

Amon Gamaliel Carter, Jr. was born on December 13, 1919, and upon his father’s death in 1955, Amon inherited his father’s coin collection and took over many of his business interests. Carter, Jr. became publisher of the Fort Worth Star-Telegram, an investor in Gulf Oil, and a director of American Airlines. Amon, Jr. served in World War II and was taken prisoner by the Germans. A young Polish woman who worked at his camp smuggled food to him, thus enabling him to survive (in later years he never forgot her kindness, and she and her family were rewarded handsomely). He married Georgeann Brown in 1953 and the couple had two sons and a daughter.

Amon, Jr. kept the coins in a room-size vault on one wall of his newspaper office in Fort Worth. Occasionally, an item was sold if an attractive offer was received, as in the case of the 1822 $5 gold coin, for which an offer of $60,000 by Benjamin Stack proved to be too tempting. However, most of the collection remained intact.

The 1804 silver dollar was the pride and joy of the cabinet, and Amon took it to many coin shows to exhibit. One time in the 1950s, he even loaned it to me so that it would attract attention in my case of coins for sale (although Carter’s 1804 dollar most certainly was not for sale). When I told him that I did not have insurance to cover it, all Amon said was “That’s okay.” Amon also enjoyed carrying around $10,000 bills, and he was apt to have a half dozen or more in his vest pocket.

Seeking to have his own accomplishments in numismatics, Amon cared little for adding to the already impressive collection of American coins gathered by his father. Instead, he branched out to collect coins from Mexico and Canada and, in particular, he formed an incredible holding of United States currency. In 1957, he took home the Howland Wood Best of Show Award for his currency display. Amon, Jr. enjoyed coin collecting and the people involved and was a familiar figure at conventions for many years.

After his passing on July 24, 1982, suffering a heart attack while driving on a freeway, John N. Rowe III of Dallas was enlisted to sell the Carter Collection. Many of the bulk items, the remarkable collection of paper money, and other holdings were sold privately by Rowe, while the impressive holding of United States and world coins was consigned to Stack’s, who distributed the pieces in a series of auctions spanning several years. Other parts of the Carter Collection were auctioned by Lyn Knight in 1985 and Hickman & Oakes in 1986.