Certain issues of United States coins seem to hold more appeal than similar coins of other dates and mints.

Among my favorite coins are the various pieces coined at the San Francisco Mint in 1923. This was a significant year for several reasons, including the low mintages and condition rarity of most denominations dated 1923-S. Collectors will find that locating high quality examples of these pieces, whether circulated or mint state, will make for a satisfying challenge.

In 1923 the nation was just beginning to recover from several years of economic slowdown that followed the bustling, inflation-ridden economy of the Great War. The three United States Mints were at full scale production from 1916 through 1920, by which time it became evident that a redundancy of most coins had developed. In fact, there were so many coins in storage by the end of 1920 that this supply lasted through the middle of 1923 for most denominations. 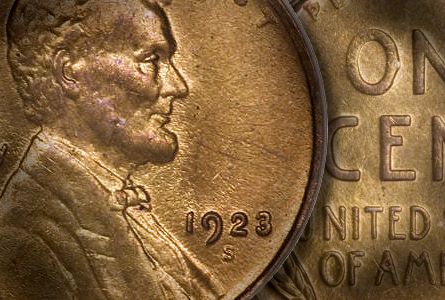 San Francisco provided for the coinage needs of the western states and American territories, such as Alaska, Hawaii and the Philippine Islands. Its role in striking Philippine coins ended with the opening of the U. S. Mint at Manila in 1920, so this further eroded the demand for new coins from San Francisco.

1921 saw modest mintages of cents early in the year and a similarly small number of nickels coined in the waning months. Most of these appear to have remained idle until needed a year or two later. Half dollars were particularly well liked by westerners, and their production in 1921, though relatively low, exceeded that of the other mints. No other denominations were struck at San Francisco in 1921, aside from silver dollars. Things grew even quieter in 1922, when just dollars and double eagles bore the date 1922-S.

These last two denominations were not circulating coins in the conventional sense, and their production did not reflect domestic demand for additional pieces. Silver dollars were coined in accordance with the Pittman Act of 1918, which mandated that the dollars melted under that legislation be replaced with new coins made from domestically-mined silver. The resulting coins saw very limited circulation, most of them remaining idle in vaults for decades. Double eagles, and indeed all gold coins, were no longer circulating after the war, and the ones made in 1922 were used solely to back paper gold certificates and in international transactions.

The arrival of 1923 initially suggested that it would be a repeat of the previous year, but then the economy picked up in the spring. The drawdown of idle coins in storage accelerated, and it soon became evident that additional pieces would be needed. The Mint Director’s Report reveals that all 1923-S cents were produced during the final four months of that year, with a total mintage of 8,700,000 pieces. This figure is small only in comparison to the huge mintages of 1916-20, yet examples of this date are elusive in all but the lowest grades. Heavily worn pieces were widely hoarded by speculators from the 1940s into the early 1960s, but coins grading Extremely Fine and higher are scarce. This is due not so much to wear as to the poor striking quality evident in these coins as made. The dies appear to have been improperly hardened, eroding quickly in use. The result was many coins having the detail of Fine at best, even when newly minted.

Sharply struck, well detailed 1923-S cents are rarities in any grade. Though Mint State examples are not especially rare in overall numbers, they are seldom found with a pleasing appearance. The typical MS coin is toned brown, with perhaps a trace of mint red color within the protected areas. This coloration is usually brassy, and toning streaks from an improperly mixed alloy in the planchet are not uncommon. These streaks result in what has come to be known as “woodgrain” toning, and it is seen often on ‘S’ Mint cents dated 1908 through the mid-1920s. In another phenomenon common to copper or bronze coins, the most sharply struck pieces are typically toned to brown, while only the mushy cents from heavily worn dies are likely to retain a significant amount of mint red. The exact reason for this is unknown, but it certainly applies to 1923-S cents.

One of the odd features of United States coins is that their style of date numerals often is inconsistent from one year to the next. This was most evident in the Lincoln cent, a coin which debuted in 1909 using a script-style date sculpted into the original obverse model by its creator, Victor David Brenner. Subsequent dates were applied by the Mint’s own engravers, who cut them directly into each year’s master die. The long-tailed 9s used for the 1909 cents dictated that all numerals 3, 5, 7 and 9 should likewise have long tails, yet this was routinely overlooked for most issues. A perfect example is the cent’s date for 1923, as it retains the long, hanging tail for numeral 9, yet this is paired with a squat 3 having uniformly round loops that are entirely inappropriate.

Next month I’ll continue my look at the San Francisco Mint coinage of 1923 with profiles of the 1923-S nickels, dimes and quarters.

David W. Lange’s column, “USA Coin Album,” appears monthly in the Numismatist, the official publication of the American Numismatic Association, and is re-posted here on CoinWeek with Permission of Numismatic Guarantee Corporation