No Motto Liberty Head eagles were struck from 1838 through 1866. They were made at the Philadelphia, New Orleans, and San Francisco Mints in quantities ranging from small to quite large. One thing that links these issues is their rarity in higher grades. There is no such thing as a “common date” No Motto eagle in MS63 or MS64, and in properly graded MS65 and higher this type is exceedingly rare.

In this blog, we’ll look at the reasons why these coins are so rare in higher grades and we’ll also look at the small number of coins that have been graded in MS65 and higher at the two major services.

Before we look at specific dates, let’s ponder the reasons why Gems of this type are so rare. For many dates, the answers are simple: few were struck and none were saved, as there were basically no collectors saving business strike higher denomination gold in 1866 and earlier. But what about a date like the 1847-P with a large mintage of 862,258. Why are there no Gem 1847 eagles known?

The first reason is that a large percentage of these coins were melted and survival rates tend to be in the 1% to 2% range. Secondly, these coins were shipped loose to banks and they suffered from contact during this process, leaving them heavily abraded. Most importantly, there have been no shipwrecks or fluky hoards that, as in the case of numerous Type One double eagles of this era, have led to the availability of numerous coins in MS65 and higher.

Now that we have established some basic reasons for the rarity of this type in Gem, let’s examine the small number of coins that have been graded MS65 or above. 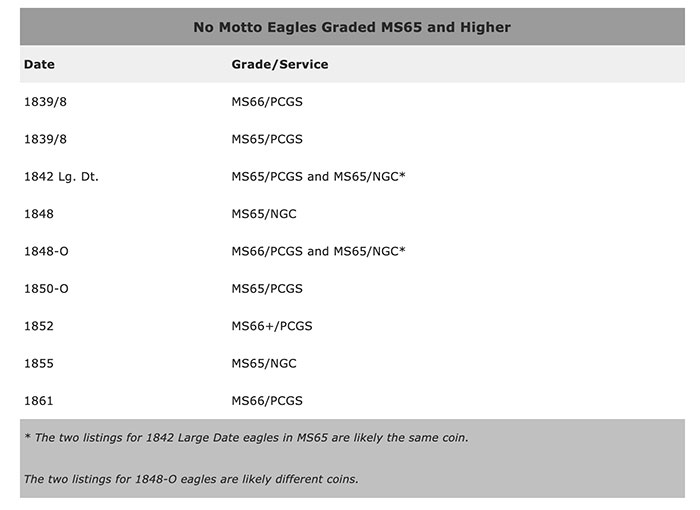 This gives us a total of 11 listings, which is (likely) a much lower number of unique coins. Given the fact that tens of millions of these coins were struck, that’s an amazingly low number.

Going chronologically, let’s look at the 10 No Motto eagles that have been graded MS65 or higher: This scarce subtype was made only in 1838 and the first part of 1839. There are no Gems dated 1838, so type coin specialists needing this design are laser focused on this issue.

There are as many as 10 or so 1839/8 eagles known in Uncirculated. Two are Gems. The first is now in the DL Hansen Collection and it holds a record at auction for any business strike Liberty Head eagle with a sales price of $402,500 USD in its January 2005 appearance in the fabled Gold Rush Collection. It grades PCGS/CAC MS66.

The second finest is a PCGS/CAC MS65 which was most recently in Oliver Jung’s amazing type set. It first surfaced in a February 1998 Superior sale, where it fetched $253,000 as a raw coin.

I’m not 100% sure but I believe that this was a coin that belonged to the late dealer Ed Milas, who was building a high-quality set of $10 Libs back in the late 1980s/early ’90s before he stopped and sold them. I remember this being in a PCGS MS64 holder when he showed it to me. I can’t remember what it was priced at ($30,000 comes to mind) but if I recall correctly, the coin was exceptional. I passed on it but would be thrilled to buy it today at current market levels.

It is odd to note that there are more reasonably high-grade examples of this date (MS63 and finer) than any other New Orleans eagle from this era, save for the high mintage 1847-O. The finest known is a killer PCGS/CAC MS66 originally from the James Stack Collection. This is the single finest branch mint No Motto eagle and it is currently in the Pogue Collection. In March 2020, it will be offered for sale for the first time since it was obtained by Brent Pogue in Bowers and Merena’s 2003 ANA auction.

There is a second 1848-O, listed in the NGC Census, as an MS65. I have never seen or heard of this coin and I believe it is an incorrect listing, or a PCGS MS64 that upgraded. This coin, pedigreed to the Eliasberg and Clapp collections, was obtained by me a few years ago and sold to the New England Collection where it resides in the finest collection of New Orleans gold ever assembled. It grades PCGS/CAC MS65. When this coin sold at auction in May 1999, it brought $100,625 – which was the first auction record for a business strike Liberty Head eagle at over $100,000.

Ask any seasoned US gold expert what the single best No Motto eagle in existence is and you are likely to get a unanimous response: the Einstein 1852. This coin was owned by the collector Harry Einstein (the father of famous actor Albert Brooks and a famed comic in his own right) and it first sold around 1985/1986 in a PCGS MS65.

I remember being absolutely floored by this coin and I’ve still never seen a US gold coin of this era that was so perfect save for a few gold dollars and a number of SSCA 1857-S double eagles. This coin has gradeflated to MS66 and again to MS66+, but I think it fully deserves these accolades and I actually would be surprised if it doesn’t upgrade to MS67. It last sold in 2008 for $253,000 and it was purchased by Brent Pogue.

I’ve never seen this coin in person and I’m going to venture that it was likely a PCGS MS64 that upgraded. In November 2000, a PCGS MS66 example of this date sold at auction for a very reasonable $50,600. For some reason, I can’t recall having been blown away by this coin. Given the fact that I was bidding on a higher percentage of the lots in one sale than any other auction I’ve ever attended (except the Bass II sale in 1999), this Gem from the Bass Collection hasn’t been offered for sale publicly in two decades.

When you read about these coins, you can see how small the number of bonafide Gems is. I count seven coins that I have seen and can verify as MS65 or finer; two of which, ironically, will come up for sale in a month.

If I had to choose the single most desirable No Motto eagle in existence, I would select the James Stack 1848-O, closely followed by the Einstein 1852, and the Gold Rush 1839/8.

Would you like to own a Gem No Motto eagle? Contact Doug Winter via email at [email protected] and let’s get your name on a world-class coin’s pedigree!