By Mark Ferguson for CoinWeek – www.MFrarecoins.com ……..

As we all know, it’s been all over the news in the world of rare coins – the recent world-record sale of the beautiful 1794 PCGS-graded, Specimen-66 silver dollar for $10,016,875.  And now the door’s open for more famous rarities to break through the $10 million dollar barrier – thanks to the courage acted upon by Bruce Morelan and Laura Sperber of Legend Numismatics by leading the way and paying that record-setting price!  This news is also reaching beyond numismatics – to the art and investment worlds, just like news did last year when a famous painting sold for a world-record price at the $120 million level.

What will be the next coin to break through the $10 million barrier?  Who knows?  Will it be a rare gold coin?…A gem 1913 Liberty nickel?…Or a silver coin – most likely an 1804 silver dollar?  One of the finest known 1804 Dollars is an excellent candidate as they’ve sold for record prices many times in the past.  And importantly, because of the sale of the dollar for $10 million, the world’s focus is now pointing toward this area of numismatics – “Early” silver dollars, which were minted between 1794 and 1803.  Those dated “1804” are in a class by themselves because they were struck decades later than their dates indicate – a fascinating story in and of itself! 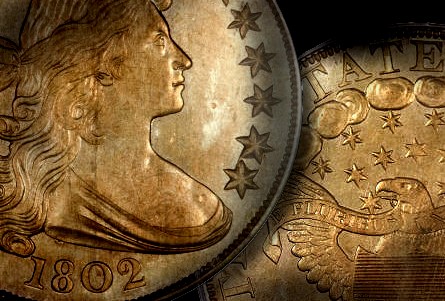 A major appeal for “Early Dollars” is their large size.  People tend to prefer larger coins over smaller-size coins.  For example, one of the “Big Three” famous U.S. coin rarities people dream about owning, besides a 1913 Liberty nickel and an 1804 Dollar, is an 1894-S Barber dime.  These dimes have a great history.  There were only two dozen struck and only about half that total is known to exist today.  But a dime is a much smaller coin than a silver dollar and just not as popular.  Frankly, I think a gem 1894-S Barber dime is way undervalued today in comparison to some of the other rarities that have traded during recent years – I’ve had one offered to me not too long ago and have researched it!

Another appeal is that Early Dollars are a short series minted over just a ten year period – again from 1794 to 1803.  But if a collector/investor wants to go further than building a ten-coin set, there are major design types that overlap these years.  There are two major obverse design types – the “Flowing Hair” design, minted during 1794 and 1795, and the “Draped Bust” design, minted from 1795 through 1803.  Then there are two distinctly different reverse design types – the “Small Eagle” reverse, used between 1795 and 1798, which also varies slightly from the reverse used during 1794 and 1795, and the larger “Heraldic Eagle” reverse, used between 1798 and 1803. Experienced and advanced collectors often take their collections to an even higher level, by continuing to build their Early Dollar sets by die variety, as listed by “Bolender” numbers or “Bowers-Borckardt” numbers which are specialized numbering systems that have been created to list all the varieties of all the dies used to strike Early Dollars.  Advanced die variety collecting has grown in popularity among collectors of similar areas such as Early Copper coins and Bust Half Dollars. When two or more advanced collectors compete to buy the rare die varieties…that’s when prices often skyrocket!  Serious six-figure profits have been made by savvy collector/investors who’ve learned about the market for die varieties!

For collector/investors who take an interest in learning about “Early” Silver Dollars, they can have fun and profit handsomely as well.  And as for the rare, multi-million dollar 1804 issue that most collectors can only dream about owning, there is a historic piece of the real 1804 Dollar history that’s a substitute for this coin issue – a beautiful work of art, titled “The Dollar of 1804.”  It is a lithograph print reproduced from a unique work of numismatic art created in 1887 for James V. Dexter, legendary owner of the famous Dexter 1804 Dollar.  It’s a limited-edition historic collectible that has a “mintage,” and it’s been appreciating in value over the years, just like the real 1804 silver dollars have been appreciating!

If you are interested in obtaining a print, call me at 920-233-6777 for availability, prices and shipping. Top 10 Most Controversial US Coins