Three firms held auctions immediately before and during the June 2 to 4 Long Beach (Calif.) Coin, Stamp & Collectibles Expo, which in total realized more than $22 million. 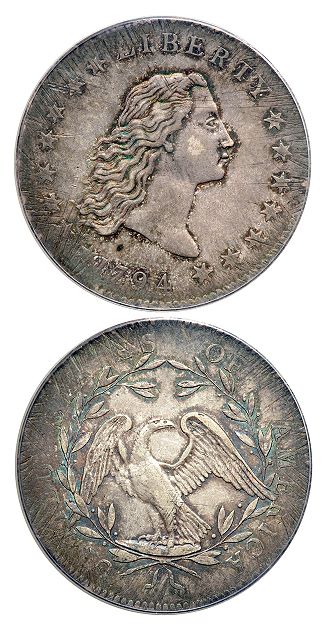 The coin market seems starved for major rarities, and the top lot of the Long Beach auctions was a rare 1794 Flowing Hair dollar offered in the Goldberg sale. The coin is graded About Uncirculated 58 premium quality by Professional Coin Grading Service and is adorned with a Certified Acceptance Corp. sticker. It sold for $575,000, within the pre-auction estimate of $500,000 to $600,000.

The coin was formerly in the collection of the Connecticut Historical Society and the catalogue description included a note that Martin Logies believed the coin could “easily qualify as an MS-61.”

Logies is numismatic curator of the Cardinal Collection Educational Foundation, which purchased a PCGS Specimen 66 example of a 1794 Flowing Hair dollar for a reported $7,850,000 in a 2010 private transaction. Later that year on Aug. 7, a Mint State 64 1794 dollar sold at a Bowers and Merena auction for $1,207,500.

But not all high-end coins are bringing their owners substantial returns. An MS-65 1795 Flowing Hair dollar was the top lot in the Heritage Long Beach auction, selling for $253,000. While a quarter of a million dollars for a coin is undoubtedly impressive, the same coin sold at auction for $230,000 as part of the Cardinal Collection in June 2005 by American Numismatic Rarities. Although the 2011 price was higher than the 2005 price, after transaction fees are considered, the owner realized a loss.

It is one of two known gem examples of the die variety among eight to 10 Mint State pieces known, according to Heritage.

Upcoming major shows include the Whitman Coin and Collectibles Baltimore Expo, set for June 16 to 19, and the summer Florida United Numismatists Show in Orlando, scheduled for July 7 to 9.

The market then functionally takes a summer break until the American Numismatic Association World’s Fair of Money in the Chicago area Aug. 16 to 20, with an affiliated pre-show scheduled for Aug. 13 to 15.