By Louis Golino for Coin Week

Major print and broadcast media seldom focus on coins. But in the past two weeks the news media has devoted considerable attention to an issue that coin collectors are well aware of, namely, the oversupply of $1 coins. This includes both the presidential dollar coins created through a 2005 law, the Presidential $1 Coin Act, which have been issued since 2007, and the Native American dollar coins, which have been minted since 2009 and which are the successor to the Sacagawea dollars. The 2005 law also led to the creation of the first spouse $10 gold series. Both the presidential and first spouse programs have approximately five years to go unless ended early by Congress. 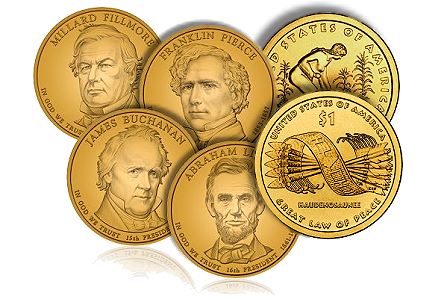 In June the Board of Governors of the Federal Reserve issued its annual report on the $1 coin program. The report found that because few people want or use the coins, demand for them is extremely low. To this day, cashiers at some retail stores still do not realize the coins are legal tender, and because businesses have the right not to accept certain forms of payments such as bags of pennies, some do not even accept the coins. And vending machines and parking meters have for the most part still not been upgraded to accept dollar coins. In addition, most people save them if they receive them in change, which happens extremely infrequently. As a result, $1.25 billion worth of the coins are sitting in Federal Reserve vaults and based on current projections, by the end of the program there will be over $2 billion worth of unwanted coins.

Storing all those coins costs a lot of money beyond the 32 cents it costs to produce each coin. According to a recent report on ABC News, the rate at which the coins are made means the Mint spends $600,000 a day just minting them. Another $650,000 has been spent to build a facility in Dallas, Texas to store the coins, and shipping them there from Federal Reserve facilities in Baltimore, Maryland and other locations is estimated to cost another $3 million.

There is growing sentiment in Congress to end dollar coin programs because of the view held by many members of congress that the coins waste taxpayer money. Rep. Carolyn Maloney of NY, who sponsored the law that created the presidential coins, now says the Mint and the Treasury are mismanaging their inventories (http://www.nbcnewyork.com/news/local/Wasting-Money-Minting-Money-125612348.html).

But one critical point is almost always overlooked by those concerned about the costs involved in such programs, and that is that no taxpayer money is used to fund the U.S. Mint
(http://coinsblog.blogspot.com/2010/09/no-taxpayer-money-is-used-by-us-mint.html). Even the production of circulating coins is funded strictly through seigniorage, or the difference between a coin’s face value and the cost to make it. Although it is part of the federal government, the Mint is actually a public enterprise fund (http://www.usmint.gov/pressroom/index.cfm?action=pef)
that receives no annual appropriations.

The presidential coins are not even popular with collectors. Many consider their designs to be rather uninspired, and prior to their release many collectors proudly proclaimed they would not waste their time or money collecting them. Even the collector versions, made for proof and uncirculated coin sets, have not fared very well in the secondary market. Most of the four-coin proof sets of them sell today for less than they cost from the Mint when issued. When the coin for President Abraham Lincoln was issued last year, some people, including myself, thought they might do well, as the silver commemoratives did. But the Lincoln presidential dollars carry no special premium.

The 2 euro commemoratives issued by the countries of the Eurozone provide an interesting contrast with the presidential dollar coins, which are about the same size. Each Eurozone country issues regular 2 euros which have an observe side specific to each country and a reverse shared by all the countries, but they also issue circulating commemoratives of the same denomination in more limited numbers. These coins are popular among collectors in Europe and around the world partly because of the low mintages but also because they have interesting designs that commemorate a wide variety of people, events, and issues. I will be covering the 2 euro coins in more detail in forthcoming articles for this column.

As for the U.S. circulating dollar coins, virtually everyone agrees that there is only one way to get Americans to use them, and that is to do away with the paper dollar. Doing so would also save a lot of money since dollar coins, like other circulating coinage, lasts for decades, while paper bills have a much shorter life span. Many people seem reluctant to give up their paper dollars because they do not want to carry around dollar coins, but unless you have a lot of them in your pocket they are really not that heavy. They weigh about the same amount as a quarter, and most of us have no problem carrying quarters in our pockets or purses. I am sure we could make the adjustment if we had to. In the meantime, the Mint is working with the Federal Reserve and the Congress to reduce the number of dollar coins made. In part this will be accomplished by changes to legislative requirements which currently mean that banks must order new issues in the series from Federal Reserve banks during a mandatory introductory period. When that period is over, financial institutions end up redepositing about 40% of the coins. In addition, another provision mandates that 20% of all dollar coins must be Native American dollars, which have a design most people find attractive. Those dollars are distributed through two main channels via the Mint. One is the Direct Ship program, which allows people to order $250 or more of the coins at face value with no shipping charge to increase the number in circulation. The other is retail Mint sales of rolls of the coins to collectors at a substantial premium. Although the Direct Ship program includes a requirement that the coins not be redeposited at banks, about 60% of the coins end up being redeposited anyway.

The Federal Reserve report (http://www.federalreserve.gov/boarddocs/rptcongress/dollarcoin/2011/dollarcoin2011.pdf) suggests ending both the introductory period for presidential dollar coins and the 20% requirement for Native American dollars. If both are ultimately implemented, the oversupply of dollar coins should be reduced substantially.

But even more radical changes may be on the horizon. Rep. Jackie Speier of California is currently circulating a “Dear Colleague” letter(http://speier.house.gov/images/pdf/speier_wasteful_presidential_coin_act.pdf) which recommends that the U.S. not produce any dollar coins. She plans to introduce legislation soon calling for the immediate halting of all dollar coin programs. Since the 2005 legislation that created the presidential dollars also created the first spouse gold coin program, some have speculated that that series would also end, if the bill became law. But it is not at all clear that the bill will gain enough support to pass, or that it would necessarily end the first spouse program. A law to end dollar coins is one thing, but unless the 2005 law is totally repealed, or is amended in a way that calls for ending the spouse program too, I am not sure the spouse program would end.

Moreover, there is hardly an oversupply of first spouse gold coins, quite the opposite in fact, and the Native American dollars are relatively popular with collectors. Members of Congress seem not to realize that the Mint is a self-funded entity, and they are criticizing the Mint for following their own legislative mandates. I think a far better approach than ending the production of dollar coins would be to drastically reduce the number made, perhaps minting only enough for annual coin sets, and/or to eliminate dollar bills. And the next time you hear someone talk about how we lose so much money making and storing dollar coins remind them that none of that is taxpayer money.