The Citizens Coinage Advisory Commission  met on February 11 to discuss a range of issues including designs for the 2015 America the Beautiful quarters, the possible issuance of a special 24 carat (.9999 fine) gold half dollar marking the 50th anniversary of the issuance of the John F. Kennedy half dollar in 1964, and other issues.

During the meeting commission members discussed their preferences for the coins and considered mock-up obverse designs provided by the Mint’s staff, but they were unable to reach a consensus on the coin’s details, which will be discussed again after the Mint’s survey data is available. The main issues discussed included: whether to use a dual date (1964-2014) as on the 1976 bicentennial coins, or a standard 2014 date; whether the coin should have its gold fineness indicated and where that should be placed; whether to place the “W” mintmark for the West Point Mint (where the coin will be struck) on the obverse or the reverse; and whether the coin should have the same weight as the original half dollar, which would mean a gold content of about three-quarters of an ounce, or if it should be thicker, possibly a high relief coin, and contain one ounce. 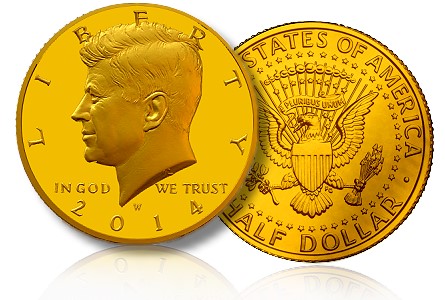 The option included in the Mint’s recent survey said the coin would cost about $1200-1300 based on current gold prices, which assumes a coin of the same weight as a half dollar. A one-ounce coin with around $1300 of gold at current market price would cost something on the order of $1500 after factoring in production costs and the Mint’s profit mark-up.

One commission member expressed concern that scammers would gold plate regular JFK halves and try to pass them as the 2014 gold commemoratives, but the W mintmark would make the 2014 coin easily distinguishable as would a dual date.

The original design for the 1964 half dollar that was made by U.S. Mint Chief Engraver Gilroy Roberts and that depicts a bust of President Kennedy will be used for the obverse, but the reverse design has not been determined yet.

A lot of discussion regarding this coin both during the CCAC meeting and in the numismatic press has focused on the issue of the coin’s affordability, and whether a gold coin would be beyond the reach of many collectors.

Numismatic News editor David Harper has stated that the coin should not be issued because those who want to have complete sets of JFK halves would need to acquire one, and some might not be able to afford to do so. He further suggested that the money that would go towards the gold coins would be better spent on other coins, but those decisions will be made by individual collectors, many of whom are eager for a JFK gold coin and who plan to save up for it, or to curtail other coin purchases so they can obtain it when it is released, which at this point seems likely to be during the second half of the year. Besides, the Mint issues many other expensive gold and platinum coins.

As I stated previously , to me the key issue is how many coins are made (enough for coin collectors and others who might want the coin, but not too many which would make the coin so common its aftermarket value would be diminished) and how the coins are sold (with household limits, minted to demand, etc.).

James Bucki, another coin writer, has suggested  that the coin should be selectively gold-plated in similar fashion to coins issued by the Royal Canadian Mint for their special high-end silver proof sets. But our Mint has never issued such coins, and from what I have heard from collectors about this issue in general, I suspect gold-plating would not be very popular with most collectors.

Finally, those who worry about the expense of the gold coin seem to forget that other, less expensive coins will also be issued for the occasion, including special clad and silver sets that are already being produced, and possibly other coins.

The much-anticipated 2014 Baseball Hall of Fame commemorative coin program will be launched on March 27 with the release of a $5 gold coin, silver dollar, and clad half dollar in proof and uncirculated condition. All the coins will have a common obverse showing a baseball glove, and a common reverse depicting a baseball. They will also all be the first curved shaped coins issued by the U.S. Mint with a concave obverse, and a convex reverse. The Mint consulted with the Australian Mint and French Mint on these coins because both have previously issued curved coins. It is unclear if the Mint will also issue any sets of these coins such as a 6-coin set with one of each coin issued.

As soon as I heard the coins were being launched on March 27, it occurred to me that the Whitman Expo in Baltimore, Maryland begins the same day, and that the show would be a great venue for selling the new coins. The Mint provided the following in response to my inquiry about whether the coins will be sold at the show: “The United States Mint has not yet determined whether or not we will be able to sell the 2014 Baseball Hall of Fame Commemorative Coins at the Whitman Coin Show. We will decide shortly before the show based on available inventory.”

Display examples of the coins will be available at the Atlanta World’s Fair of Money held from February 27 to March 1.

In response to an inquiry I made to the Mint regarding why none of the 2014 issues in both the First Spouse $10 gold and five-ounce silver America the Beautiful coin series have been added to the Mint’s product schedule, the Mint provided the following information: “The First Spouse Gold Coin and America the Beautiful Silver Uncirculated Coin™ Programs require approval by the Secretary of the Treasury (or designee) to set program mintage levels prior to coins going on sale. The proposed mintage limits submitted by the United States Mint to the secretary were approved on February 24, 2014. Accordingly, we are developing a 2014 program release schedule. The Great Smoky Mountains National Park America the Beautiful Silver Uncirculated Coin will be the first to go on sale, in late March.” Presumably the bullion versions of the five-ounce coins will also be available around that date.

Audited Data Released on First Spouse and other coins

The Mint recently released a lot of final, audited mintage data on collector coins issued between 2009 and 2012, which reflect changes from the original, unaudited sales figures. Until the audited data was made available the sales data was the only information available. The audited data includes adjustments to sales data for coins and sets that were ordered but not sent to customers because those orders could not be fulfilled due to insufficient inventory, credit card problems, and other issues.

This data is a real treasure trove for astute collectors since mintage levels are a key factor in determining the value of modern coins. In some cases the changes are quite significant. Unlike classic coins, where the number of coins that still exist after melting is so important, for the most part it can be assumed that most modern collector coins still exist. There are of course exceptions to that such as the 2007 First Spouse coins, many of which were melted, and common silver coins like proof sets and commemoratives that have been melted.

The Mint’s web site has a section  that has the new data on silver and gold eagles, gold Buffalos, and special collector sets from 2009 to 2012.

In addition the Mint released the final, audited data for the 2009-2011 First Spouse gold coins, which was provided to me by the Mint: Note that as suggested in this column several times, the two key coins are the 2011 uncirculated Garfield and Hayes coins, which are the lowest mintage U.S. coins of the modern era, or past 100 years.