On Tuesday, Feb. 5th, the firm of Ira & Larry Goldberg will auction one of the most excellent collections of ancient coins to be offered in recent decades, “The Hunter Collection.” There are more than 250 gold, silver and bronze coins in the sale. While the sale as a whole may realize millions, there are quite a few choice rarities that will sell for less than $5,000 each.

The oldest coins in the sale were made around 500 BC and these do not cost a fortune. In “The Hunter Collection, there is an extremely rare, “Superb Extremely Fine” grade, coin minted in an Ionian Greek city, in an area that is now part of the nation of Turkey. This Ionian coin dates from between 521 and 487 BC and may sell for less than $5000, though it is impossible to precisely predict auction results. The front of this coin features a portrait of the head of the goddess Athena wearing a classic helmet. This coin is made of a natural mix of silver and gold (electrum). 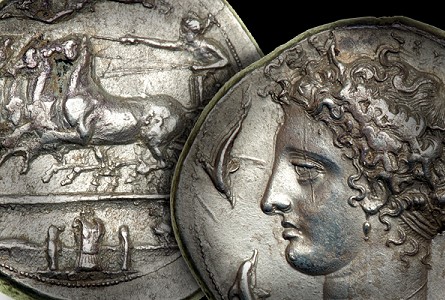 Yes, most first rate collections of ancients include coins that are rare and of historical importance. Indeed, many of the greatest figures of antiquity are depicted on coins, the Caesars of Rome, Alexander The Great, Egyptian Monarchs, among many others. Symbols and concepts relating to religion and ancient civilizations often appear on coins as well. The Hunter Collection stands out because of the high quality of the coins.

A large percentage of surviving ancient coins have been heavily worn, scratched, harshly cleaned, corroded, or banged about over the ages. Most of the coins in the Hunter Collection, however, grade extremely fine or higher. Many are mint state. Furthermore, these tend to have surfaces that are remarkably free of marks and scratches. They are incredibly choice for ancient coins. Indeed, most are among the finest known of their types. Some are likely to be the finest!

According to Jason Villarreal, the auction manager, “a large portion of the coins in the Hunter Collection were purchased by the consignor more than twenty years ago. This is a really fresh collection.”

Ira Goldberg states that “it has been an honor to work with this collector for more than thirty years. He was very dedicated to finding historically important coins of the highest quality available. He was not afraid to pay aggressive prices for the best coins. There is often a need to pay a little extra or stretch to buy the most desirable coins. He knows that. He established rigorous standards and he stuck to them,” Goldberg emphasizes.

Alexander The Great, and other Kings of Macedon King Alexander III of Macedon (in Northern Greece) was a student of Aristotle from the age of thirteen to that of sixteen. Before Alexander The Great was thirty, he successfully conquered a large part of Asia and ruled a kingdom that spanned from the Ionian sea to the Himalayas. In “The Hunter Collection,” there is a gold coin minted under his reign and two others minted after his death, as tributes to him, in societies he had controlled. These specific coins have excellent detail and appealing luster.

Among silver coins, one of the highlights of “The Hunter Collection,” is an earlier coin minted under the reign of King Alexander I, dating from 492 to 479 BC (lot #4042). It is a large silver coin, weighing 28.6 grams (0.92 troy ounce), slightly heavier than a United States Morgan or Peace Silver Dollar. According to the catalog, this coin is “Superb Extremely Fine” and has soft gray toning, in addition to being “unusually well struck.” The horse on the front is bold.

There are several other coins of the ancient Macedonian Kingdom in this sale, including some depicting Phillip II (father of Alexander the Great) and others from the era of King Demetrios I, which were made around 300 BC. On the whole, there are many ancient Greek coins in this sale, almost all of which grade Choice Very Fine or better, including several rare pieces from Sicily.

Two really neat Sicilian silver coins from Catana (Katane) are among the highlights of “The Hunter Collection” (lots #4012 and #4013). Each is a high grade tetradrachm and each was struck after 410 BC and probably before 403 BC. Each weighs more than a U.S. half dollar. The designs are noteworthy, and representative of the era, with a head of Apollo on the front and horses on the back.

These tetradrachms are important relics of a largely forgotten society. After all, these were struck shortly before Catana (Katane) was again captured by the forces of Syracuse in 403 or 402 BC. After it was captured, the Catana city-state was brutally dismantled by King Dionysius I and is believed to have then become a camp for mercenaries. Two of the most famous coins in “The Hunter Collection” are very large silver coins, decadrachms, of King Dionysius I (sometimes spelled Dionysios), minted in Syracuse, Sicily (lots #4021 and #4022). Each weighs more than 43 grams, around 1.4 troy ounces!

Though both these pieces grade Extremely Fine and are of very similar designs, the first is even more important because it was signed twice by Kimon. “Among die engravers, Kimon is one of the great masters of ancient times,” Ira Goldberg exclaims.

Kimon and Euainetos were two engravers in Sicily who had a tremendous influence over the designs of coins of ancient Greek states. Their work was often copied or imitated.

The second decadrachm of Syracuse (which is sometimes spelled Syrakuse) in this collection was struck from dies that were either engraved by Euainetos himself or by an artisan or two who followed his lead. This coin was struck between 400 and 390 BC.

There are other coins from Syracuse, Sicily in this sale, a few of which are gold coins. A “lustrous, Superb Extremely Fine” silver tetradrachm that was minted around 300 BC attracts considerable attention (lot #4030). Though not one of the rarest nor one of the most historically important, it is one of the more memorable pieces in “The Hunter Collection.”

Maybe the most historically important coin in “The Hunter Collection” is a gold aureus, which was struck in the summer or autumn of 43 BC (lot #4121). It depicts the recently deceased Julius Caesar on one side and a young Octavian on the other, who was elected president (‘consul’) of the Roman Senate in August, 43 BC., when he was around twenty years old.

The rise of Julius Caesar marked the decline of the Roman Republic, which was ruled by a body of elected legislators, and the beginning of a society that was largely (though not absolutely) governed by a single individual. Essentially, Julius Caesar’s supporters declared that he made decisions for Roman society at large, not for wealthy families or landowners. His critics said that he was a tyrant and a fascist dictator, who did not respect property rights or the outcomes of elections. When Caesar was assassinated by Brutus, Caesar’s grand-nephew Octavian was named Julius Caesar’s heir and successor in his will. Military leaders, business people and wealthy land owners did not immediately accept a teenager as a major leader in Roman society. Octavian, however, was brilliant and a shrewd politician. He consolidated power, essentially ended the republic, defeated the armies of rivals, and ruled as “First Citizen,” really an emperor, for more than forty years, from 17 BC to 14 AD.

This gold aureus weighs 8.23 grams, a little less than a U.S. Half Eagle ($5 gold coin). It was minted at a pivotal time in the history of Rome, shortly after Octavian led a large military force into the Roman capital and was preparing to battle the forces of Mark Antony, formerly Caesar’s top general, who was marshaling forces in Gaul.

This coin was formerly in the Nelson Bunker Hunt Collection, one of the all-time best collections of ancient coins. Earlier, it was in a Sotheby’s auction in 1895!

The Hunter Collection also includes other gold and silver coins from Octavian’s long reign. He is also known as Augustus Gaius Caesar Octavius, among other names. Essentially, he was the first emperor of Rome.

Scope of the Collection

There are, of course, too many classic rarities in “The Hunter Collection” to list. While some of those that appeal to a wide audience are mentioned here, others will be of interest primarily to seasoned collectors of ancients.

The Hunter example of the Baktrian Gold Stater of Eukratides (lot #4103) is one of only seven examples known of its type, and it is nearly mint state! The most valuable coin in this collection may be an Egyptian gold octadrachm from around 200 BC (lot #4111). It weighs a little less than a U.S. Double Eagle ($20 gold piece). It is mint state and has amazing surfaces for an ancient coin, with much reflectivity.

There are also coins from medieval times in “The Hunter Collection.” On the whole, the are a wide range of coins and this sale is very much of interest to beginning, intermediate and advanced collectors. Plus, there is much information and excellent photos in the finely detailed catalog, and in the online version. In addition to Ira Goldberg, Gregory Cole, Claudia Samuels, Cami Slotkin, and David Sear contributed to the catalog. Sear has written several major references on ancient coins.