While I hate to make bold pronouncements based on a small number of auction results, it looks like an interesting trend may be occuring in the Carson City half eagle market. Within two months, three important CC half eagles have sold at auction and brought tremendous prices. Let’s take a look at the three coins in question, analyze the results, and try to make some sense of this market. 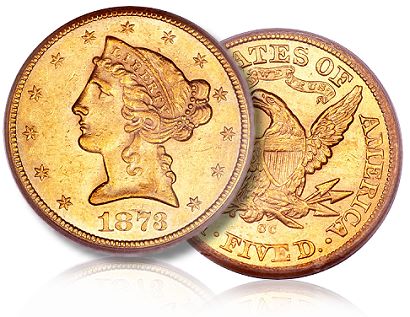 The first of these coins is a PCGS graded Mint State-62 1873-CC half eagle. This is a coin that I am very familiar with, having sold it twice via private treaty within the last five years. In fact, I sold it a few years ago to the collector who consigned it directly to the Heritage 2011 FUN sale, where it became Lot 5118 in the Platinum Night session.

This was a coin I always thought I was a little ahead of the curve on. When I sold it to a good client around five years ago, I told him, “this is going to be a six figure coin someday.” But it seemed that “someday” was going to be quite far in the future.

Here’s why I’ve always loved this coin. The 1873-CC is the rarest Carson City half eagle in higher grades. It doesn’t have the cachet of the 1870-CC but it is rarer and, in Uncirculated, the 1870-CC, if available, would sell for a minimum of $125,000++. There are two 1873-CC half eagles known in Uncirculated: this example and an NGC MS62. The PCGS MS62 is not only nicer, it has a wonderful pedigree (ex Bass) and it is a solid coin for the grade with good luster and attractive, natural coloration. Unlike the 1870-CC, the 1873-CC is nearly unobtaianble in AU55 or AU58 grades, so if a collector wants to obtain a high quality piece he has very few options. I expected it to bring around $80,000 to $90,000 in the auction.

The 1873-CC sold for $161,000. This was an all-time auction record for this date (by a factor of around three) and it was significantly more than I expected. Another interesting Carson City half eagle in the Heritage FUN sale was an 1878-CC graded AU58 by PCGS.

This is a very rare date and an issue that is extremely hard to locate in About Uncirculated and Uncirculated grades. I have never seen or heard of a Mint State piece so, for all intents and purposes, an AU58 is as nice an example of this date as you are likely to find.

The 1878-CC sold by Heritage was offered at Lot 5120. To be honest, I wasn’t crazy about the coin. While sharply struck, it had color that I felt was questionable and it appeared to have been recently processed. But it was one of just five so graded by PCGS with none better.

It sold for $63,250. This is the exact same price that Heritage 5/08: 4235, the previous record holder for the date, brought a few years ago. The difference between the two coins is that, in my opinion, the piece that sold in 2008 was considerably nicer. The 2011 FUN sale price was extremely strong given the quality of the coin. The third interesting Carson City half eagle to sell at a Heritage auction was an 1879-CC in a PCGS MS62 holder. This coin was not entirely fresh as it had been placed in a Heritage sale back in October 2010 where it failed to meet its reserve. It was reconsigned by the owner into the February 2011 auction and this time it brought $69,000; by far a record price for this date and considerably more than it would have brought in its earlier appearance had it hit the reserve.

This coin was different than the 1873-CC and 1878-CC. Unlike these other two dates, the 1879-CC half eagle is common in most circulated grades and it can even be found, with just a bit of effort, in nice AU55 to AU58. In Mint State, the 1879-CC has around six to eight survivors but nearly all grade MS60 to MS61. The MS62 in the Heritage sale was the best that I’d ever seen and I’m reasonably certain it was the finest known.

So, three different coins and three strong auction results. What can we deduce from these sales? I think the first thing we can determine is that there are at least two new individuals putting together sets of Carson City half eagles. I’m not certain if they are doing other CC gold coins or Liberty head half eagles from other mints, but they are clearly gaga for CC’s. The second thing is that these collectors want coins that are the highest graded. And if they are “pop 1/0″ coins, that’s even better. The third thing is that they want the coins to be in PCGS holders. I’m not sure if the 1873-CC half eagle mentioned above would have brought anywhere near $161,000 if it had been the exact same coin but in an NGC holder. The fourth and final thing is that these buyers seem to like to purchase their coins at auction. But something tells me that if the right item came up for sale, and it were on a dealer’s website, it would find its way into one of these collections.

One thing I’ve learned from nearly three decades of specializing in branch mint coins: the high end of these markets is very thinly traded and when just one or two new “mega collectors” start a collection of, say, finest known Carson City half eagles then prices can jump upwards in a hurry. And this seems to be exactly what’s happening right now with this area of the market. It will be interesting to see if more important coin become available in the next few months and, if they do, what sort of record prices they will bring.