April 15th marks the 100th anniversary of one of the world’s greatest maritime disasters, the sinking off the coast of Canada of the then largest and most luxurious ship in the world, the RMS Titanic.  1,517of the 2,229 passengers perished in the tragedy.  RMS stands for Royal Mail Steamer.  None of the ship’s mail survived the disaster, but mail that was sent on stops during the ship’s maiden voyage is on display at the Smithsonian Institution’s postal museum.

The ship left Southhampton, England on April 10, 1912 heading for New York City.  Four days later the ship hit an iceberg 300 nautical miles southeast of Newfoundland, and three hours later it sank.  The survivors were rescued by Canadian ships, and many of those who died are buried in Halifax.  Survivors say that even as the ship was sinking into the water, the band kept playing. 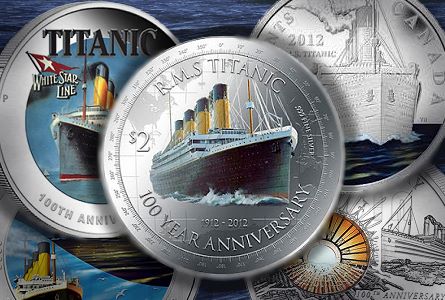 The Titanic tragedy has haunted and fascinated the world for a century, and coins with maritime themes have always been popular with coin collectors.

It is therefore not surprising that many coins have been issued marking this important event, particularly by countries in the Commonwealth of Independent States since it was an English ship that sank near Canada (both commonwealth countries).  In earlier years various coins and medals were also issued, and some survivors had medals made to honor those who rescued them, such as for the captain and crew of the RMS Carpathia, which played the key role in rescuing passengers.

Canada played a major role in the Titanic story, and it is rolling out a wide range of commemorative coins and stamps to mark this important event.  The Royal Canadian Mint (www.mint.ca)  has issued three commemorative coins marking the event plus a special reverse proof silver Maple Leaf with a Titanic privy mark and a mintage limited to 25,000 coins.

In 1998 another Titanic privy mark coin limited to 26,000 pieces was issued by Canada. Interestingly, the entire mintage was apparently purchased by one distributor.

History has repeated itself as the entire run 2012 Titanic privy mark coins was purchased by the American Precious Metal Exchange in Oklahoma (www.apmex.com), one of the largest bullion and coin dealers in the world and U.S. Mint Authorized Purchaser.  The coin is currently available for what I think is a reasonable price of about $11 above melt value.  The coins are selling fast, and once they are sold out of the entire mintage, I expect prices to move higher.   The 1998 Titanic privy mark coin retails for about $80 from coin dealers. Canada’s main Titanic 2012 coins are: a colored quarter in a special folder, a silver-plated half-dollar that uses color only on the ocean, and a half ounce $10 coin.  The half dollar sold out in about a day of its 15,000 mintage.  Originally priced at $35, the coin is now hard to find and the few coins that have been sold on e-Bay have sold for $170-200 recently.  The $10 coin also sold out of its 20,000 mintage, but not as quickly.  It typically sells for about $70.

The silver-plated half dollar sold out so quickly of its mintage not just because Titanic-themed items are very popular in Canada but also because 10,000 of the 15,000 coin mintage is reserved for sale in a special collectors set sold by the Canadian Post Office.  The set includes both the silver-plated half dollar now going for $200 and the color quarter plus the Titanic stamps issued by Canada, a real White Star Line stock certificate, and some other materials in a leather folder.  The sets are still available and cost $140.

Alexandre Reeves, communications official at the Royal Canadian Mint, confirmed to me that the coins in the set sold by Canada Post are part of the overall mintage.  This helps explain why the half dollar coin sold out so quickly, since customers and dealers who buy from the Mint could only order 5,000 of the 15,000 coins minted.
APMEX also purchased the entire mintage of another attractive Titanic coin issued by the nation of Niue that includes special packaging with a porthole that houses the coin.  The coin uses color on the ship and is popular with collectors.  The mintage is 2,229, or one for every passenger on the ship.  The Niue coin was minted by the New Zealand mint.

APMEX initially priced the coins at $80, but some buyers who bought coins from APMEX sold them on e-Bay for prices in the $120-150 range. APMEX later raised the price to $100 a couple weeks ago, and now it is charging $120, which is about the average current e-Bay price.

The country of Fiji issued an impressive limited edition five-ounce silver coin with a mother of color pearl insert that shows the ship. That coin is bringing $1,000 and more now.

The British Royal Mint (www.royalmint.com) issued a silver coin for the commonwealth country of Alderney marking the anniversary of the tragedy that shows the ship and a statue of Thane from the Titanic memorial in Belfast, Northern Ireland.

The Perth Mint in Western Australia (www.perthmint.com.au) issued my personal overall favorite, a one ounce silver coin with a color insert showing the ship as depicted on the original poster for the White Star Line.  That coin has a mintage of 5,000 and sells for $110-130.  It was made by Perth for the country of Tuvalu.

Silver and gold coins have also been issued by the Cook Islands, Isle of Man, Jersey, and other countries.  The Cook Islands proof silver coin with color is notable because it includes a piece of coal salvaged from the wreck.  The mintage of that one is 2,012.  Cook Islands also issued a $1 gold coin that has a mintage of 15,000 pieces.