Friends, another amazing season is just around the corner. A chorus of leaves brandishing their colorful fall wardrobes outside my living room window confirms this revelation. The NFL season has kicked off and our favorite team’s respective stadiums are filled with fans. In numismatic circles, the race is on for what seems to be a record in the last quarter of 2021.

While 2020 will forever be an eye-opener for the world and our ultimate survival, 2021 has continuously been an adjustment to what is now that “new normal.” What is definitive is that all collectibles have enjoyed a blaze of demand this interim. As for numismatics, this period is truly unfathomable. The market for coins, both US and world, is unlike anything I have witnessed in my era. I have lived through all the coin booms; and while each was dynamic, the sheer unrelenting demand in the last 18 months has been a phenomenon.

I Will Take Mine Rare, Please

Rare, key, semi-key, certified, or raw, prices for virtually everything have been heightened. Of course, the appetite for those ultra-rare elite numismatic delicacies has been off the chart. By the end of August, a dozen NGC-certified coins had already powered past the million-dollar benchmark. To date, those 12 coins (five of them World coins) have realized a combined total of over $30 million USD. Adding to this equation, a half dozen coins being struck in 2021 are already racing in the secondary market, and they aren’t even in the collectors’ or dealers’ hands yet!

How can that be? I will explain.

Morgan Dollars have always been a popular series to collect. Since the announcement of the 2021 centennial reboot of the last dated Morgan, bearing the 1921 date, and the transitional Peace Dollar of that same year, demand has skyrocketed for each series, which is not just targeting the 1921 issues.

Fueling that fire even more is the United States Mint. The reason? Although all six coins in the program were immediately sold out on the Mint’s website, none of the coins will be shipped for at least another month!

Absence Made the Market Grow Fonder

As most of my fellow coindexters are aware, on May 24, 2021, the Mint’s website went berserk with a massive online traffic jam as collectors and dealers were attempting to secure the privy-marked “O” (New Orleans) and “CC” (Carson City) installments.

A few days later, the US Mint announced that it was “adjusting” the pre-launch sales date for the remaining four 2021 dollars while it attempted to make improvements to its website’s ordering system. The coins that should have been released June 1 and June 7 were pushed forward to August 3 for the “D” (Denver) and “S” (San Francisco) versions and August 10 for the Philadelphia 2021 Morgan and Peace Dollar.

This back-order status of these six centennial Silver Dollars has driven the secondary market demand through the roof. In this instance, the absence of these coins has truly made the demand for them grow exponentially fonder, I say!

It has been an accepted practice that sellers on eBay will tout that they have “confirmation” of a particular US Mint issue and will send the coin or set to the winning bidder when the seller receives it from the Mint. Under normal circumstances, it should only be a matter of a week or two before the winning bidders (mostly collectors, who were shut out during the coins’ initial release, but also some dealers, attempting to add to stock for their clients) will have the coin or set in their possession. But not this time! Thousands of winning bids have already registered and paid for the first two 2021 Morgan Dollar reboots. 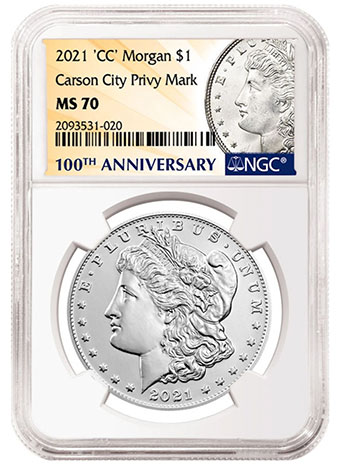 For illustration, a well-known dealer/trader had offered “CC” pre-orders at $170 per coin on May 24. The successful collectors and dealers have already been waiting nearly four months and will still be waiting until the Mint ships these around mid-October.

As of today, the average prices paid on the eBay platform for the modern Morgans are:

The 2021 Peace Dollar is also courting stronger demand and is averaging $225.

Now considering that each coin was issued at $85 and using the above averages, a set of six coins will bring $1,640 on eBay versus a $510 US Mint issue. That equates to a 221% increase — for coins that haven’t even been delivered! Keep in mind that these prices are for raw, uncertified coins. Pre-sales for all six coins in NGC First Release MS 70 slabs are bringing in over $3,500, which is 585% above the issue price. I like to use the 2011 25th Anniversary five-piece Silver Eagle set as a benchmark for modern Mint-issue mania. Ten years ago (October 27, 2011, to be precise), the base “unit” price of $299.95 per set with a five-set maximum including shipping came in at $1,504.70. I believe the top prices paid for five-set cases topped out at around $4,250 from dealers by end of November. At that time, which I thought was tremendous, that price equated to a rather modest 182% increase over issue.

As these 2021 coins hit the marketplace, where the demand gravitates toward next month is anyone’s guess. Yet, based on the ongoing demand and prices realized, these coins may still have considerable legs left. I know I am happy that I have my coins coming from the Mint shortly! In this instance, the absence has made the market grow fonder.