Blending some of the world’s oldest and Rare Earth elements The Perth Mint has applied its expertise to present a magnificent example of its artistry.

Born of supernovas, precious metals such as silver were present in the cloud of galactic dust that coalesced to create our solar system. A supernova occurs during the final stages of a star’s life cycle and culminates in an explosion of titanic proportions.

Rare and brilliant, diamonds have been a source of intense fascination for centuries. After forming billions of years ago they remained deep in the Earth’s mantle before being catapulted closer to the surface by rapidly ascending streams of molten volcanic rock. 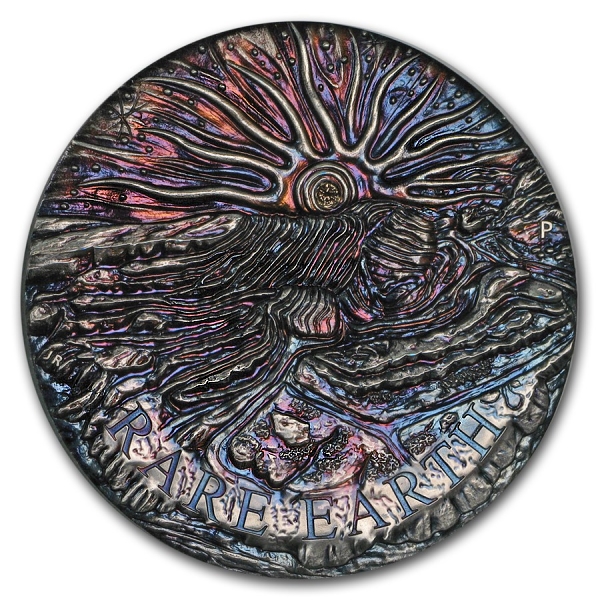 The unique and naturally coloured golden diamond featured in this coin, aged at 1.6 billion years, has been extracted from the Argyle Diamond Mine in Western Australia’s spectacular Kimberley region.

Struck by The Perth Mint from 5oz of 99.99% pure silver and featuring a handset Argyle golden diamond, the coin is issued as legal tender under the Australian Currency Act 1965.

The Perth Mint will release no more than 1,000 of the Rare Earth 2018 5oz Silver High Relief Patina Coin. Sculpted in pure silver, the coin’s reverse depicts an artistic representation of a star exploding into a supernova with a handset golden diamond at its centre. The design includes an interpretation of lava flowing from a volcano and forming the layers of the Argyle Diamond Mine, representing the origin of the precious jewel. The design also incorporates the inscription RARE EARTH and The Perth Mint’s ‘P’ mintmark.

The Ian Rank-Broadley effigy of Her Majesty Queen Elizabeth II, the 2018 year-date, the weight and fineness, and the monetary denomination are depicted on the coin’s obverse.

Reflecting the timeless nature of the elements from which it has been crafted, the coin has been individually oxidised to give it a unique patina effect conveying the surface of an aged artefact. As a result of this specialised treatment the appearance and subtle colouration of each coin will vary.