Modern Proof coins that were struck at the San Francisco Mint, as most Proof coinage has been since 1968, normally bear an “S” mint mark. A small number of these coins have surfaced over the years that lack the mint mark, and they are among the greatest rarities of modern American coins – with some of them even being unique.

The king of such coins is the 1976 Bicentennial Eisenhower silver dollar Proof coin with no mint mark, or “no S”. It is important to note that these coins are Type 2 examples of the Eisenhower dollar that have thinner lettering on the reverse inscriptions. Halfway through 1975, United States Mint Chief Engraver Frank Gaspparo contacted the designer of the bicentennial reverse, Dennis R. Williams, to ask if he could change the reverse design so that the coins would strike better. Those coins were introduced in 1976 and carry the dual inscription “1776-1976” like all Bicentennial Ike dollars.

Only one example (PCGS PR66 DCAM) is currently known to exist of this amazing coin, and it was purchased in 2002 by modern coin expert Mitchell Spivack. He considers it “the rarest and most special modern’ U.S. coin in existence,” and PCGS estimates its value at $850,000 USD. The specimen is also unique in being the only Type 2 Ike Proof dollar struck in 40% silver instead of clad.

The origins of this coin remain a mystery. In 1974, prior to the release of the Bicentennial version of the Eisenhower dollar, trial examples were produced in Proof at the Philadelphia Mint. Some of those trial pieces were struck by artists who won the design competition for this coin and did not have the “S” mint mark because they were struck at the Philadelphia Mint, but they were later destroyed and replaced with coins that have the “S”.

Others were made at the request of Mint Director Mary Brooks for presentation to President Gerald Ford and other dignitaries, but they all carry the “S” mint mark and were Type 1 reverse coins. A few of these coins have survived.

There are no records explaining why examples with the Type 2 reverse were struck in Proof with no mint marks.

In 1977, the coin was discovered in a cash register at the Woodward and Lothrop department store in the Washington, D.C. area. As Ron Guth and Jeff Garrett argue, the coin is likely either a trial piece of the new Type 2 variety, or it was made to be given to dignitaries. Some speculate that if it were the latter, they may have spent the coin not understanding how rare it is! 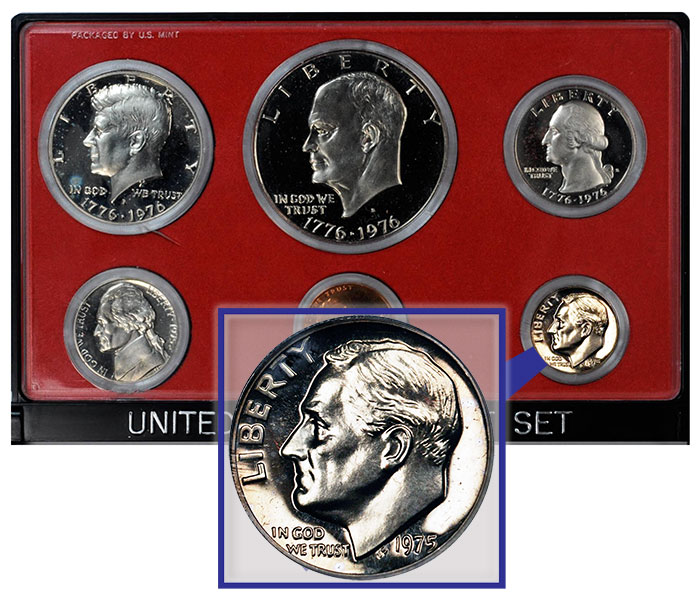 With only two examples known to date, this coin is also the #1 ranked modern U.S. coin by longtime researchers and coin dealers Scott Schechter and Jeff Garrett.

The origin of this piece is likely the practice in the late 1960s and early ’70s of producing dies for Proof coins at the Philadelphia Mint and then sending them to the San Francisco Mint to be struck. This is believed to be the reason for the existence of a number of “No S” Proof coins, including the 1968 and 1970 pennies with no “S” and the 1971 nickel of the same type and most importantly the 1975 No S dime.

In 1975, a collector who ordered Proof sets from the Mint discovered that two of his 1975 sets had dimes that lacked the “S” mint mark. He later sold both sets to a dealer, and for 30 years the coins did not change hands again. Then in 2011, one of them was sold at auction for $349,600, which brought the coin to the attention of the public and numismatists.

When the first edition of their book 100 Greatest U.S. Coins was released in 2011 (and presumably written in 2010), Schechter and Garrett did not include this coin because they did not believe it existed, but in the 2017 edition, it ranks #1!

Because it has now been almost 50 years since the discovery of this coin, most numismatists do not think it is likely that other examples are still out there, but it is possible. And experts believe that Mint employees noticed the error and destroyed as many examples as they could. 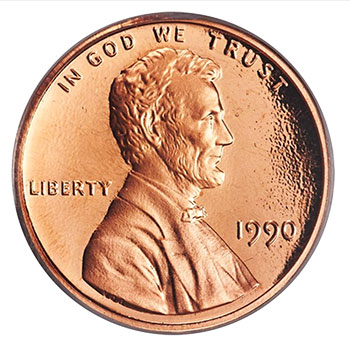 The 1990 Lincoln Memorial cent struck in Proof with no mint mark is not quite as rare and valuable as the two coins discussed above. PCGS has graded 238 of them, including 71 that grade PR69 DCAM, the top grade.

This coin was first discovered by a collector on July 18, 1990, and afterward, the Mint announced that some of these coins had been accidentally struck in San Francisco. It also said 145 examples had been destroyed. The coins were found in both regular Proof sets and Prestige Proof sets from 1990.

It is believed that this error is the result of accidentally processing a die for a Mint State 1990 penny as a Proof coin as a result of the practice at the time of adding mint marks by hand to individual dies, which increased the possibility of such errors.

Experts believe the total mintage of this coin was 3,700 – the number of Proof cents that could be made at the time with one die pair minus the 155 the Mint found and the 250 or so that collectors have discovered unless a smaller number made it out of the Mint because they were discovered in time. So check your 1990 Proof sets!