Americans have long considered the signing of the Declaration of Independence on July 4, 1776 as the birthday of the United States. And 1976 was a special year: the 200th anniversary, or bicentennial, of our nation’s founding.

But Congress and the United States Mint were still leery of what they viewed as the abuses of what we now call the Classic Commemorative series.

So for the country’s Bicentennial in 1976, the Mint released special versions of three of our circulating coins: the Washington quarter, the Kennedy half dollar and the Eisenhower dollar. Bicentennial coinage was issued for two years (1975-76), and coins issued in both years featured the dual date of “1776-1976”. Wanting new “Bicentennial-themed” designs for the reverse of each denomination, the Treasury Department held a design competition open to all American citizens. Out of 884 entries, 12 semifinalists were chosen; a five-judge panel of experts then selected the winning designs.

All three were created by artists that were either already working professionally or were about to. Jack Ahr, designer of the Bicentennial quarter reverse, was the owner of his own commercial art company. Seth G. Huntington, designer of the half dollar reverse, worked as the head of the art department at the marketing firm of Brown & Bigelow. And Dennis R. Williams, the designer of the Eisenhower dollar’s Bicentennial reverse, was an art student at the Columbus College of Art and Design in Columbus, Ohio. Each received a $5,000 prize and struck the first of their respective coins at a ceremony in Philadelphia. coin None of them had ever worked for the Mint before, and none of them have since. 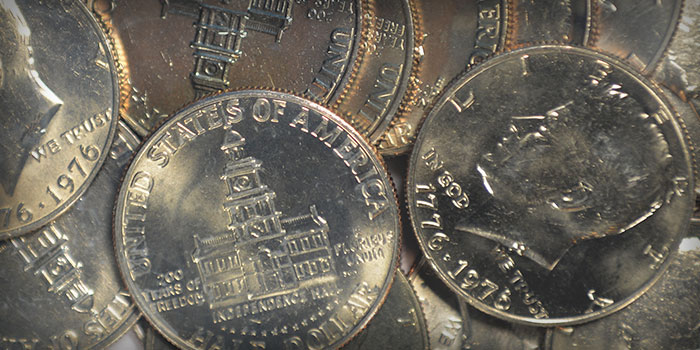 The Bicentennial Kennedy half dollar was the first of the three coins to be issued, at a ceremony in Huntington’s hometown of Minneapolis held on July 7, 1975. Over the next year and a half, a total of 521,873,248 clad business strike Bicentennial halves would be struck in Philadelphia and Denver, with 7,059,099 Proof clads produced in San Francisco. Throwback 40% silver clad half dollars were also minted in San Francisco, with approximately 11,000,000 business strikes and approximately 4,000,000 Proof strikes manufactured. It is difficult to know for sure how many of these still survive since many were undoubtedly lost to the Great Silver Melt of the late 1970s and early ’80s.

Like most Kennedy half dollars of any period, significant contact marks can be found on the Bicentennial issue – especially on the President’s cheek, around his eyes and in his hair. If you’re lucky enough to find a silver clad version, the softness of the metal relative to the copper-nickel composition makes for deeper and more frequent scratches and marks.

Quality Mint State pieces tend to be middle of the road, with 64 and 65 grades being most common. And even though finding one of these coins in circulation is a lot less common now than it was, say, 20 years ago, the coins are still “common” according to any objective measure of rarity. It remains one of the more popular issues of the modern clad era of United States coinage.

On all Kennedy half dollars, including the Bicentennial issue, the obverse was designed by Gilroy Roberts, Chief Engraver at the United States Mint from July 22, 1948 to February 11, 1965. Roberts’ medal for President Kennedy’s inauguration served as the basis of the coin’s design.

The central motif is a portrait of the 35th President of the United States, the late John Fitzgerald Kennedy. A war hero and (at the time) the youngest person ever to serve as president, Kennedy was inaugurated on January 20, 1961 and assassinated on November 22, 1963. The nation’s grief was such that Congress and the U.S. Mint rushed through a design change on the half dollar denomination to commemorate the bereaved president.

Gilroy Roberts’ initials can be found on the truncation line of Kennedy’s bust, above the “WE” on the bottom right side of the coin. The reverse features a symmetrical front view of Independence Hall in Philadelphia. It was built in 1753 and served as the meeting place of the Second Continental Congress (1775-1783) and the Constitutional Convention (1787). Both the Declaration of Independence and the United States Constitution were signed here. The inscription UNITED STATES OF AMERICA wraps around the top half of the rim, while the denomination HALF DOLLAR is found at the bottom. Thirteen small stars are lined up above the denomination, following its curvature. The phrase 200 YEARS OF FREEDOM is located on the left of Independence Hall, and the motto E PLURIBUS UNUM (“Out of Many, One”) is on the right. The name of the building runs immediately underneath.

A spire atop the hall inserts itself between the last two letters of the word “STATES” and almost touches the edge of the coin. Seth Huntington’s initials “SGH” are found at the lower right corner of the hall, below E PLURIBUS UNUM.

The edge of the 1976 Bicentennial Kennedy half dollar is reeded.

At the time his design was selected, Seth Huntington was the head artist of Minneapolis, Minnesota marketing firm Brown & Bigelow.