Over the past four weeks, the prices of gold and silver have experienced a major decline once each week.  Last week, the suppression occurred on Friday, April 13 during the last 15 minutes of COMEX trading, between 1:15 and 1:30.

How is it possible to identify this event as a manipulation rather than just the actions of a free market?  Unfortunately, that is becoming quite easy to detect.  Significant price moves resulting from market developments rarely occur in a vacuum.  If investors were worried about falling demand for commodities, you would see price declines in a number of industrial metals as well as precious metals.  If investors perceive a greater likelihood of another round of quantitative easing, the value of the dollar would tend to drop as US stock markets rise with gold and silver prices. 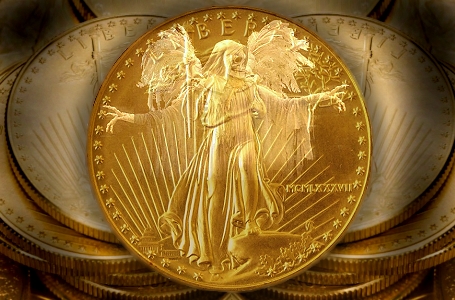 Last Friday, there was no particular news that should have led to a major impact on gold and silver prices.  There were no sympathetic moves in other markets in conjunction with the decline in the value of precious metals.  So, what did happen?

In the 15 minutes before the COMEX close, 10,000 gold contracts changed hands.  Normally a high percentage of COMEX trading occurs within the first two hours of a trading day.  The trading of 10,000 contracts going in to the close is highly unusual, to say the least.  These 10,000 contracts represent one million ounces of gold, valued at well over $1.6 billion.

At all times in the COMEX market, there are posted bids and asks.  An investor makes a transaction by accepting either the posted buy or sell price.  Since the price of gold declined about 1% during the last 15 minutes of trading, that shows that almost all of the high volume of trades were made by sellers hitting bids.

The entire trading pattern reflects that the sale of so many contracts was done specifically to drive down the COMEX closing price of gold.  Any smart investor seeking to sell so much gold would try to do so for the highest possible price.  That would be accomplished by spreading the sales over time and among different brokers.  Further, a smart seller would do everything possible to avoid pushing down prices going into the COMEX close.

When you combine the quantity of gold contracts sold with the time of day that they were sold, the reasonable conclusion is that these were coordinated sales made solely for the purpose of driving down gold and silver prices.

The same suspicious selling occurred the previous week at 2 PM (Eastern) April 3 on the release of the minutes from the most recent Federal Open Market Committee.  Within 30 minutes the quantity of silver sold equaled 80% of annual worldwide mining production.  The deluge of sales started right as the minutes were being released.  These were not sales by people who read the release and then decided to sell on the basis of the contents of the minutes.  No, these sales were planned in advance.

I have previously warned my readers that markets will be more volatile as we get closer to the time when I expect gold and silver prices to soar.  When the US government needs to work with its trading partners and allies to engineer a major price suppression once a week, we are getting a lot closer to the day when such tactics will no longer work.