“I thought I knew what the stuff was worth but I guess I didn’t” – “Great coins are going far beyond what we’re bidding.”

A flurry of excitement continues to surround the numismatic world. With the first week of June in the books, a trio of auctions in Southern California have generated approximately $25 million, setting the tone for what portends to be an exciting summer. First in the books was the approximately $2 million realized on June 3 at Bonham’s coins and medals sale featuring the Champagne Lanson collection of Double Eagles.

Bonhams rare coin and banknote director, Paul Song was delighted with the results of the sale as every lot from the vineyard’s cache found a buyer, making it a “white glove” sale, in auction vernacular. Notable NGC-certified coins that sold at the firm’s well attended Sunset Blvd office and gallery include: 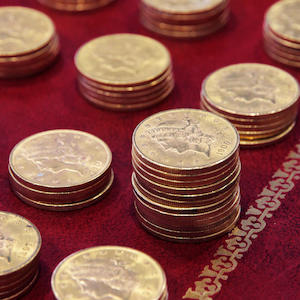 Next up for the numismatic faithful was the always exciting Goldberg’s Pre-Long Beach sale of US and world coins. The diverse auction that ran June 2-5 tallied a substantial $9.2 million. I spoke to Goldberg’s eloquent and affable lead auctioneer Jason Villarreal at the conclusion of the sale. Per Mr. Villarreal, “What I saw, especially with the $10 Libs and a lot of the better dates in that series, shipwreck pieces, etc. they just went absolutely crazy. There was a tremendous amount of excitement and very spirited bidding; just an air of that energy in the room.”

According to Jason, more than one dealer was heard saying on the auction floor, “Gee I thought I knew what the stuff was worth but I guess I didn’t.”

This activity bodes very well for the continued strength of the rare coin market as well as perhaps a little bit of a surprise. Obviously a lot of the auction participants are definitely getting beat with bids that were good enough to capture lots not that long ago but are now clearly not.

Per Ira Goldberg, “I was thrilled with the sale. It was a very, very good sale; a solid auction. It was a lot stronger than I thought it would be. We didn’t have any real huge coins or major highlights like Stellas, but it turned out to be an extraordinarily solid sale. The sell through rate was high and we definitely have a lot of happy consignors.”

I asked Ira about the strengths of the sale and he advised me that he believed that US Gold coins were the strongest and heavily targeted by bidders. Conversely, he believed that Bust Dollars were a tad weak, yet solid type coins brought really strong prices which are a very good sign for continued strength in the market.

I agree with the learned dealer’s assessment. Strong competition again seemed to be biased towards rare and high-grade US gold coins. NGC standouts at the sale include the ever popular and rare Matte Proof $20 Saint-Gaudens. Leading the way, a phenomenal finest known 1913 NGC PF 68 $20 Saint-Gaudens roared to $120,750, followed closely by a 1909 NGC PF 67 $20 Saint-Gaudens that captured $117,875. Another finest known, an inspiring 1839-O Classic Head Quarter Eagle graded NGC MS 65 found a new home at $69,000. This was shadowed closely by the impeccable 1869 Liberty Half Eagle pedigreed to the Eliasberg collection. This NGC PF 65 Cameo also at the pinnacle of the grading standards secured $63,250. Other NGC standouts at the Goldberg sale included:

World coins also proved to be a powerhouse performer at this venue capturing nearly $2 million of the Pre-Long Beach sale’s proceeds. Per Ira Goldberg, ancients were very strong at this venue and actually, anything of quality brought accelerated prices. One of the biggest surprises was the strength of a 1867 Hong Kong Dollar graded NGC MS 63. The lightly toned original-skinned coin realized $27,600 on a pre-auction estimate of around $2,500! Another coin that raised a few eyebrows was the Extremely Fine archaic tetradrachm of Athens, circa 510-490 BC, which raced to $50,600 – nearly two and half times the pre-auction estimate!

Other NGC world treasures include:

The Long Beach Expo was the next port of call. Running June 6-8, this summer installment is usually the weaker of the Long Beach branded shows yet this turned out to be a strong show. There was the all-important consistent and audible buzz heard as attendees made the rounds with multiple buyers and sellers (with fewer of the latter it seemed) visiting dealers’ holding tables. Overall there seemed to be more manned tables and for most, the Expo was a success. More than one dealer was heard to say, “I am staying later since there was more than enough business here to justify it.” Another learned dealer confessed, “It was a good wholesale show and if you were fortunate enough to have quality inventory you made out royally as the market is so strong for that stuff.”

Per Brian Hodge of LMRC, “Great coins are going far beyond what we’re bidding. We used to be able to buy almost every CC and Type I $20s that came up in auction. Now they sometimes go for significantly more.” Brian went on to say, “We are at our lowest inventory in over 3 years. We get a great coin in and it seems to disappear immediately.” Per this Southern California dealer in terms of specific sales, “I wouldn’t be exaggerating to say that there has been heighted activity. Sales are brisk for great coins, prices certainly appear to be on the up, and I’m very excited for what lies ahead.”

According to Bob Higgins, CEO of Certified Assets, the activity at Long Beach was busier than he expected, with most conversations about collectors failing to find the quality of coins on their want lists. Also according to this source, Classic US Commemoratives were active with several high grade and colorful patinated commems selling above the $30K range.

Higgins also agreed that all Carson City gold was very strong yet bullion gold and generic gold were quiet with some sales taking place but not as much as previous shows. “High grade rarities are in high demand as I believe many are trying to dump dollars and have come to the conclusion that rare coins might be the next boom market and represent a safe haven to put cash into for now,” asserted the noted dealer from Delaware.

The Heritage host Signature Auction attempted to satisfy some of the multitude of want lists and reported in with a solid $13.7 million. A great collector-friendly mix of coins were available with heated action for fresh and high grade Colonials and Early Federal issues. Per an excited Jim Halperin, Co-Chairman of Heritage, the auction was a solid affair on all fronts and delivered a superb 95% sellthrough rate.

For an auction of this size that is certainly significant to note and confirms the broad-based support in all price points. The prize of these sessions was the finest known of the 1895-O Morgan Dollar Branch Proofs as the superb NGC PF 66 Cameo roared in with a $528,750. This date and mint combo is considered to be one of the series’ prime rarities in the business strike format, and Branch Proofs are extremely rare.

I had a chance to speak to Heritage’s well known Senior Numismatist Mark Feld and we reflected on the magnificent 1895-O Morgan Dollar.

“They’ve (NGC) certainly legitimized the market and provided value for coins that are designated as Branch Proofs compared to the pre-certification days,” asserted Feld.

“If you wanted to try to sell this coin as a specially made coin, you know a Branch Mint Proof or Specimen, in the uncertified days, there were a small number of coins that maybe carried their own credentials based on the type of designation (one example would be the 1894-S Branch Mint Proof Barber Dime). Generally without the guaranteed designation by the major grading service such as NGC, I don’t feel any of the sellers would be able to get anywhere near the type of money that they could legitimately get for these NGC-certified rarities today.”

Another standout in the Signature Sale was the always popular $4 Stella. The frequently feted pattern, which is collected alongside mainstream issues, witnessed a captivating and beautiful 1879 Flowing Hair graded NGC PF 66 Ultra Cameo race to an impressive $258,500. Other important NGC properties include the following:

As summer returns, the market and desire for rare coins remains blistering hot!