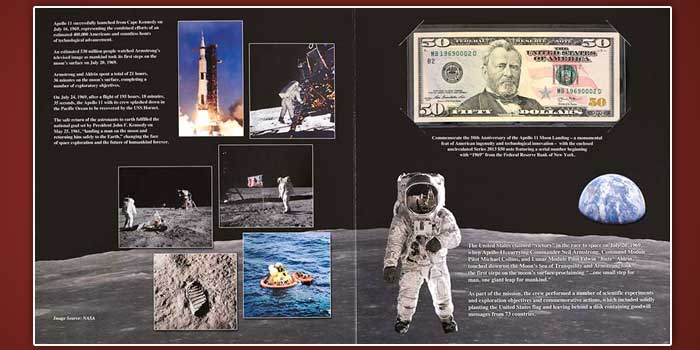 The BEP marks the 50th Anniversary of the Apollo 11 moon landing with a special commemorative currency set.

By Bureau of Engraving and Printing ……

In celebration of the 50th anniversary of the Apollo 11 moon landing, the Bureau of Engraving and Printing (BEP) is pleased to introduce the Apollo 11 $50 Currency Set!

The Apollo 11 $50 Currency Set features an uncirculated Series 2013 $50 Federal Reserve note, with a serial number beginning with “1969”, and an engraved representation of the famous “Buzz Aldrin on the Moon” photograph, taken July 20, 1969. The reflection in Aldrin’s visor – that includes Neil Armstrong, the United States flag, and the lunar lander – is embossed. The note is protected by a clear, acid-free, polymer sleeve, and the engraved print features a limited edition number that corresponds with the last four digits of the serial number on the $50 note.

BEP products may be ordered through the United States Mint by telephone, toll-free, at 1(800) USA-MINT (872-6468), and through the Mint’s online store at catalog.usmint.gov/. Products are also available for purchase in BEP’s Washington, D.C. and Fort Worth, Texas Visitor Center gift shops.

About the Bureau of Engraving and Printing (BEP)

The Bureau of Engraving and Printing (BEP) was established in 1862 and is the sole producer of U.S. currency notes. It also produces miscellaneous government security documents. BEP’s vision is to be the world standard securities printer providing its customers and the public with superior products through excellence in manufacturing and innovation.