I was recently offered a very common but very saleable New Orleans half eagle that should have been very easy to price and purchase. Instead, it turned into a Coin Pricing Fiasco, which, in turn, inspired this quick article.

The coin in question is a PCGS AU55 1844-O half eagle. This is, by far, the most available No Motto half eagle from this facility, and there are currently 48 graded as such by PCGS, with another 74 finer. Even counting for resubmissions, this is a significant number of 1844-O half eagles that have been graded in AU55 and higher grades. The owner of this coin asked me what I would pay for it. I asked him for the PCGS serial number for the specific coin and looked at the PCGS TrueView image. The coin was nice and with no due diligence, I told him I would pay around $1,400 to $1,500 as it is a coin that I would likely be a seller of at around $1,750 as a non-CAC, and $2,150 if it were CAC-approved.

The owner then pointed out that there were three fairly recent auction prices realized for PCGS AU55 1844-O half eagles in the $3,000 to $4,000 range. In August 2021, a PCGS/CAC coin brought $3,360, while in June 2021 a different PCGS/CAC realized $3,600. In March of this year, a third PCGS/CAC AU55 sold for $3,840. It is important to note that all three were nice original coins pedigreed to the Fairmont hoard. It is equally important to note that (in my opinion) while all three were nice, none were likely upgrades to AU58.

The answer is that some 1844-O half eagles are worth the former, while others are worth the latter. Going further down the rabbit hole, it must be asked: Are all PCGS/CAC AU55 examples of this date worth $3,750? What about a nice PCGS/CAC AU55 1844-O that’s crusty and original but lacks the Fairmont pedigree?

The answer is probably not – but there are enough auction records to state that a nice Fairmont pedigreed example seems to be worth this amount. 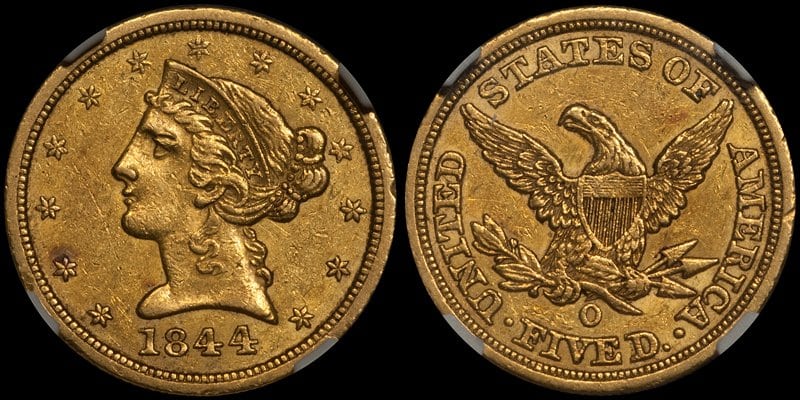 This points out just why coin pricing is very complex, even with a reasonably common issue such as a PCGS AU55 1844-O half eagle. You need to remember that the rare date gold market is very thinly traded due to limited supplies and that even a “frequently traded” issue–such as an 1844-O half eagle in PCGS AU55–has just three CAC-approved examples sold at auction in the past few years.

In the end, this situation probably means that it will be impossible for me to convince a seller that his nice AU55 1844-O isn’t worth $3,750.