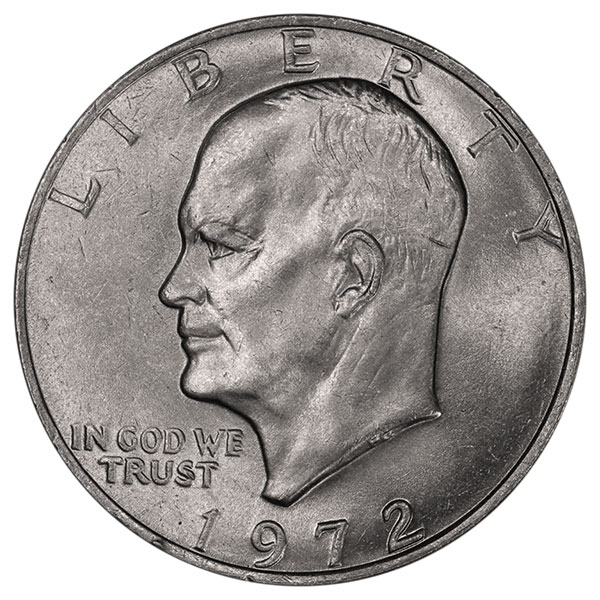 While the country at large’s desire for a large dollar coin at the start of the 1970s was hardly demonstrable, the gaming industry developed an acute need to find a replacement for the silver dollars it used to feed tens of thousands of slot machines. This “need”, and the recent passing of beloved war-hero-turned-President Dwight D. Eisenhower, presented Congress with an opportunity to cater to the needs of the industry. While United States Mint Director Mary Brooks lobbied for the Eisenhower Dollar coin to be struck in silver, Congress instead chose to strike the coin for circulation in the same copper-nickel (Cu-Ni) clad composition in use for the dime and quarter dollar. In a compromise, silver-clad versions were authorized to be struck and sold to collectors.

Despite their high mintages, Eisenhower dollars from 1971 and 1972 are less common in Mint State than issues from 1973 onward. This can be explained by the absence of dollar coins in the United States Mint’s annual Mint Sets. The first Eisenhower dollars to appear in Mint Sets were the 1973 (P) and the 1973-D, which despite that issue’s low mintage (and supposed “key date” status) are actually quite plentiful. The typical coin shop will have Mint Sets, brown packs (silver-clad Proofs), blue packs (silver-clad uncirculated versions), bicentennial sets (in BU and Proof), and clad Proof Sets but will not likely have many (if any) uncirculated 1971 or 1972-dated clad business strikes in original rolls. For 1971 and 1972 issues, sliders are plentiful.

In terms of strike and quality, muted luster, average-to-weak strikes, and heavily marked planchets are the norm. The typical 1972 (P) Eisenhower dollar in uncirculated grades will rise to the level of choice but go no further. The typical choice BU example does not possess much eye appeal. For whatever reason, the grading services are more liberal with their application of high numerical grades for the Type 2 (we describe the diagnostics of the Type 2 in detail in the next section).

The certified populations of the 1972 (P) Eisenhower dollar in all types reveal real collector demand for the coin in MS65 or above. At the time of writing, CAC has certified just 29 examples in MS65 and a mere nine in MS66.

The 1972 (P) Type 1 is the rarest of all Eisenhower dollars in the certified grade of MS66. The shape of the Earth’s visible landmasses are specific to three different hub varieties for the 1972 (P) issue. These are popularly collected and referenced in Whitman’s Guide Book of United States Coins as Varieties 1-3, but more generally referred to by collectors and dealers as Type 1-3. The graphic above provides collectors with major pick-up points for each variety. Varieties 1 and 3 are the most prevalent, while Variety 2, struck using dies intended for Proof versions of the coin, is scarce. The number of Type 2 coin emissions is not understood with certitude, but known examples released in March and August 1972 exhibit a number of identifying die markers. As the 1972 Type 2 commands a significant premium over the more common Type 1 and 3 1972 (P) Eisenhower dollars, many dealers and collectors look primarily for the Type 2 coin’s incuse islands and ignore the fact that all three Types in grades above MS65 are scarce to rare.

Short of a hoard of high-quality 1972 (P) dollars surfacing at some future date, there are no obvious sources for premium business strike Eisenhower dollars from 1971 or ’72, as Mint Sets from each of these years did not include dollar coins. The edge of the Eisenhower dollar is reeded.

Frank Gasparro was a friend to numismatists and served as Chief Engraver of the United States Mint from 1965 to 1981.  View Designer’s Profile.