As I have discussed in prior blogs, a paradigm shift has occurred in the rare date gold markets in the last two to three years. Formerly unpopular areas of the market such as San Francisco half eagles and eagles and No Motto Philadelphia eagles (and others) have gone from “cool but hard to sell” to “top of the food chain” in a short period of time. There are a number of reasons why this has happened; some obvious and some not-so-obvious. What I find interesting is that the two collections responsible for this Tipping Point weren’t great old-school holdings like Eliasberg and Bass. 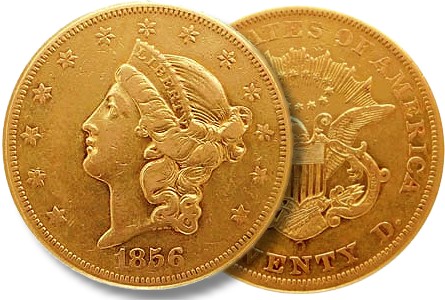 In January 2012, the San Francisco stamp auction firm of Schyler Rumsey sold the Broadus Littlejohn collection of US gold coins. This little-known collection hinted that something was afoot in the rare date gold market. Instead of focusing on traditional bellwether rare date gold items like Charlotte and Dahlonega quarter eagles and half eagles (of which there were extensive date runs in the sale), the strength was in the eagle date run, especially the rare San Francisco coins from the 1860s and the rare low mintage Philly coins from the 1870s.

The Littlejohn sale was off the radar for many collectors and dealers, and even though I wrote a detailed analysis about the prices realized, I don’t think its impact was felt at the time.

What most dealers didn’t know (confession: myself included) was that there had been an all-consuming rare date gold buyer way off the grid. The Bently Collection, which focused on Western rarities from San Francisco and Carson City, was being quietly amassed, and it contained quantities which seem borderline unimaginable.

The Bently collection was a strange amalgam of coins ranging from no-grades to Condition Census pieces. Mr. Bently was a voracious consumer of certain issues (as an example, he appears to have had a “thing” for 1870-CC double eagles, and he owned more of them at one time than any other collector in history) and if he liked an issue, he’d buy it in “VG details” or MS65. Which brings me to the gist of this story: the Bently Effect. How ironic is it that a little-known uber-accumulation of coins is probably more responsible for impacting the rare date gold market than once-in-a-lifetime master collector like Harry Bass? How much of it is the coins themselves, and how much is it the timing of the sale(s)? How much of it is the impact and reach of the internet? How much of it is just pure blind luck and changing trends within the market?

While I have been dazzled by the scope and breadth of the collection, I have been mostly underwhelmed by the coins themselves. For every nice, original coin in the Bently holdings, there are numerous coins that are either damaged or heavily processed. Bently was, I doubt, a bottom feeder and I doubt he was buying solely with price in mind. From what I know about Mr. Bentley, he was an older gentleman who sold his company and decided to enjoy his final years enjoying nice things. His primary supplier was faced with the age-old dilemma with this sort of numismatic supernova: do I sell my super-secret mega-customer a few nice coins every week or do I sell him everything I can get my hands on? I would have chosen the former, but some dealers would choose the latter (and who’s to say that this isn’t the better strategy from a business standpoint?)

A very curious set of circumstances happened while the Bently coins were being accumulated. Carson City double eagles became extremely popular and rose significantly in price; not as a result of Mr. Bently’s purchases but rather as a consequence of new collectors in the market and two large wholesale promotions. That Mr. Bentley had hundreds and hundreds of CC double eagles ranging from common dates in VF to rarities in Uncirculated was understandable given his interest in double eagles and western coins. That his estate came on the market at exactly the perfect time is one of those delightful coincidences that seemed to follow Mr. Bently around; a smaller version, perhaps of his life story.

A sophisticated collector recently asked me an interesting question about this collection; would Bently have been better off buying two or three nice 1875-CC double eagles (say MS62 to MS63) than twenty marginal (EF40 to AU50) examples? Possibly. But for many rare issues in the first three Bently auctions, the appearance of the coins themselves has had little consequence to their prices realized. If you accept my statement that market areas such as rare San Francisco eagles are currently very hot, and you accept my premise that many buyers of such coins don’t really know the difference between a nice original coin and a processed but commercially acceptable one, you’ll suddenly understand why I have been pretty awed at the prices that a lot of the Bently coins have brought. As a dealer who has lived through decades of malaise for coins like 1860-S half eagles, to suddenly not be able to buy an AU58 after bidding close to $20,000 seems mystifying.

But we live in an era of Instant Numismatic Expertise and any collector can suddenly be armed with the same rarity and price information that an expert collector or dealer has taken years to accumulate. Of course, accumulating this information and actually being able to make sense of it are two entirely different things…

Looking back at the remarkable Bass sales of 1999-2001, one thing that instantly hits me is that could just as easily have been conducted by the Chapman Brothers in 1899-1901. I remember that the insanely great Bass II sale in 1999 was essentially carved up by ten or so bidders with no internet and almost no mail bidding. Imagine something like this happening today.

The Bently Effect is a set of circumstances that have come together to create the Perfect Wave in the history of the dated gold market. A market hungry for rare coins like 1864-S half eagles and eagles. A lack of availability of these coins (partly due to the fact that Mr. Bently had bought nearly every available example in the last 5+ years). A shift in taste in the dated gold market with Big and Western suddenly being the new “in” coins. The ability of Heritage to properly catalog, market and sell these coins (kudos to whoever is managing the Bently collection and resisting the temptation to sell too many duplicate coins at once, as have other ultra-comprehensive sales in the past). And, last but not least, the power of the new Internet-driven market which has forever changed the coin business, in ways in which we still do not (in 2014) totally understand.