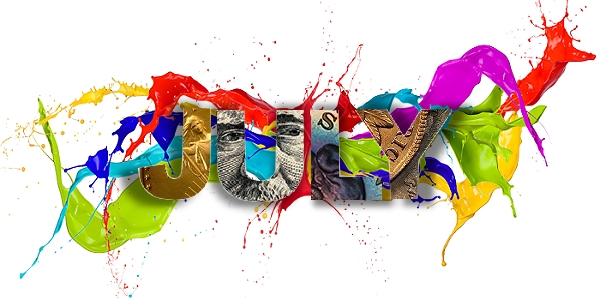 In July, the summer heat continues to pummel for 31 days. But school is out, and families can finally (FINALLY) go on that well-deserved vacation. Not to mention the food, fireworks, and festivities as we celebrate the nation’s birthday on July 4. Yet the United States Mint keeps on chugging along. For your reading pleasure, we present this day-by-day readout of some of the most interesting U.S. Mint-related July events. Enjoy!

July 2, 1989: Mint opens a retail center in Union Station, near the U.S. Capitol in Washington, DC.

July 4, 1829: The cornerstone to the second United States Mint at Philadelphia is laid by Mint Director Samuel Moore. The Facility was built on the corner of Juniper and Chestnut Streets.

July 10, 1832: President Andrew Jackson vetoes the renewal of the charter of the Second Bank of the United States.

July 11, 1792: Thomas Jefferson remarks in his journal, “Delvd. 75.D at the Mint to be coined. This deposit is coined into the half dismes of 1792, which Jefferson receives two days later. Jefferson spends them during his trip home from Philadelphia to Virginia.

July 18, 1865: The deed for the land that would become the site of the Carson City Mint is sent to Washington.

July 18, 2001: U.S. Mint announces a partnership with the Boston Red Sox AA affiliate, the Trenton Thunder, to distribute Sacagawea dollars at its ballpark for the remainder of the baseball season. The team finished the season with a losing record.

July 19, 1907: Augustus Saint-Gaudens assistant Henry Hering delivers revised models of the $10 gold coin to the Mint. Hering’s changes include lowering the relief and changing the dates from Roman to Arabic numerals.

July 20, 1862: Mint fails to deliver an order for $50 in cents in a timely manner, delaying delivery until September 12. R.W. Julian cites this as evidence that the Mint could no longer keep even one cent coins in circulation due to hoarding.

July 22, 1848: Merchants and miners in California petition California Military Governor Colonel Richard B. Mason to establish a Stat Assay Office to stamp ingots of standard value. Mason writes to officials in D.C. in August concerning California’s gold situation and recommends that a Mint be established in San Francisco.

July 22, 1876: Congress passes a law to demonetize the Trade dollar.

July 27, 1844: The Charlotte Mint is destroyed by fire. The facility would remain offline until the rebuilt facility opened in 1846.

July 27, 1860: Gearing up for potential economic uncertainty caused by the looming civil war, the Philadelphia Mint continues to ramp up coin production and strikes 36,000 dimes.

July 31, 1794: Mint completes its first delivery of gold coins: 744 half eagles plus one half eagle for assay. Depositor John Vaughan and others take delivery. The fineness of the coin comes into question leading to a scandal known as the “Vaughan Affair”.

July 31, 1893: John Daggett takes over as the Superintendent of the San Francisco Mint. Four years later to the day, he would step down.

July 31, 2018: CCAC reviews and rejects design candidates for the first American Innovation dollar coin design. We hated it too.

July 1835: The Mint ships three coin presses to New Orleans. One of the presses had an obverse die of the 1836 cent mounted in it.

July 1849: Longacre’s work on the $20 gold design begins anew after his previous effort was destroyed during the hardening process. Sabotage?

Mid-July, 1938: Felix Schlag submits his revised Jefferson nickel designs to the CFA for approval. They are approved and Chief Engraver John Sinnock begins work to prepare working dies of the design later in the month.