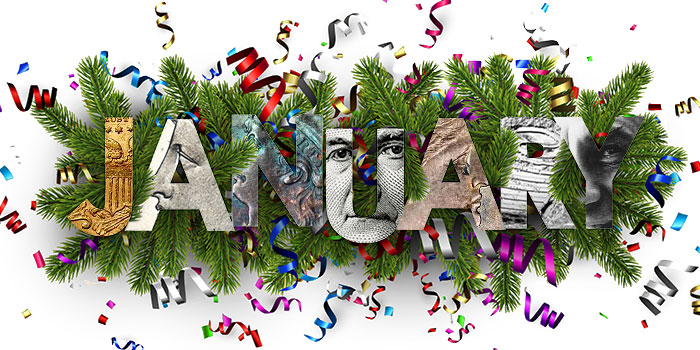 The month of January sets the stage for the new year. Americans go back to work, the wheels of the financial markets spin anew, and the United States Mint begins its year striking coins on new dies. CoinWeek has dug through more than 228 years of Mint history to provide this list of important January goings-on at the U.S. Mint. This list denotes important numismatic firsts, key personnel changes, and historic strikings.

January 1, 1796: Adam Eckfeldt, whose connections to the Mint date back to the striking of the half disme in 1792, begins work at the Mint as a regular employee, serving as an assistant to the Chief Coiner. January 2, 1867: President Andrew Johnson nominates William Millward to the position of Mint Director. Johnson appointed Millward in October 1866 while the Senate was in recess. The Senate would ultimately reject Millward’s nomination.

January 3, 1922: First Peace dollars released. On that same day, George T. Morgan wrote Anthony de Francisci to inform him that he had made adjustments to the design in order to alleviate production problems caused by the coin’s high relief. January 4, 1968: After a three-year hiatus spurred on by the transition of U.S. coinage from silver to clad, a striking ceremony is held at the Denver Mint to celebrate the reintroduction of mint marks on U.S. coins. On display at the event were two “First Strike” 1968-S Proof Sets.

January 5, 1861: After striking coins, Philadelphia Mint coiners realize that Paquet reverse dies are a different size than the old Longacre reverse dies and order the discontinuation of their use. January 6, 1936: Bills introduced to authorize the 1936 striking of the California-Pacific International Exposition (San Diego) half dollar and the New Rochelle 250th Anniversary half dollar.

January 8, 1796: Gold coinage resumes. Due to a coinage scandal, depositors are skittish about the U.S. Mint for much of 1796 and 1797 and the volume of deposits drops significantly. January 11, 1816:  A fire broke out in a building owned by the Mint, damaging rolling equipment. This leads to no half dollars being struck this year.

January 14, 1793: Congress passes legislation authorizing the reduction of the weight of the cent to 208 grains per coin.

January 14, 1797: 432 quarter eagles struck. Possibly the entire run of BD-3 Stars on Obverse quarter eagles (some researchers believe an additional 98 examples of BD-3 were delivered on February 28 and that the January 14 emission contained some No Stars examples). January 14, 1861: Secretary of the Treasury Philip Thomas resigns to join the Confederacy.

January 14, 1925: Congress passes law authorizing the production of the Lexington-Concord Commemorative half dollar.

January 15, 1782: Robert Morris proposes a standardized system for the United States monetary efforts and suggests that Congress establish a mint.

January 16, 1863: George W. Lane was confirmed by the Senate to be Superintendent of the Denver Mint.

January 16, 1905: Roosevelt writes to Treasury Secretary Leslie Mortier Shaw instructing him to have Mint Director George E. Roberts write to Augustus Saint-Gaudens to ascertain his interest in a commission to redesign U.S. coinage.

January 17, 1917: Standing Liberty quarter released into circulation. The first issue consisted of 52,000 1916-dated coins. Later in the month, designer Hermon A. MacNeil writes to Mint Director F.J. von Engelken requesting that revisions be made to the design. Congress approves MacNeil’s request on July 9. January 20, 1976: 76 examples of the Colorado Centennial medal are struck at a first strike ceremony at the Denver Mint.

January 21, 1913: After making a few slight revisions to appease the belligerent Hobbs Manufacturing Company of New York, a fresh round of Buffalo nickel patterns are struck in Philadelphia.

January 23, 1923: President Warren Harding signs into law a bill authorizing the striking of the Monroe Doctrine Commemorative half dollar. January 25, 2001: The United States government reaches an agreement with dealer Steve Fenton regarding the disposition of the so-called “Farouk” 1933 double eagle.

January 26, 1861: Secretary of Treasury John A. Dix orders the New Orleans Mint superintendent to shoot anyone who “attempts to haul down the American flag.”

January 28, 1988: Cynthia Grassby Baker is sworn in as Superintendent of the Denver Mint.

January 30, 1883: Ceremony held to mark the start of the commencement of the striking of the “V” nickel. First strike sent to President Arthur. Other ceremonial strikes are given to various dignitaries.

January 1948: begins taking orders for Double Mint Sets for coins struck in the prior year.