Introduced in 1913, the Buffalo nickel was an early hit with collectors and a major circulation workhorse through 1938 when the series ended. The coins continued to circulate after they were no longer produced and typically were found well-worn, sometimes with no visible date. Even today one can find a nicely circulated example in change on occasion.

The popularity of the Buffalo nickel is rooted primarily in its design by James Earle Fraser with a right-facing profile of an Indian chief in a headdress on the obverse, and an American bison or buffalo on the reverse.

The Indian on the coin is a composite image of (at least) three different Native American chiefs, while the bison was based on Black Diamond, who was held in the Central Park Zoo at the time. These motifs also tap into the American romance with the “Wild West” ever since the period of expansion that began in 1803 with the Lewis and Clark expedition that reached the Pacific Northwest by 1805. The coin’s designer spent a lot of time in the West when he was growing up.

Some Buffalo nickels do not have a date on them in the space on the obverse (on the Indian’s shoulder) where dates normally appear. In many cases, those coins are Type 1 1913 Buffalo nickels whose dates have worn off from heavy use during the years of the Great Depression (roughly 1929-39), and because the original design type for this coin often saw the date rub off sooner than it should have – a process that normally takes decades on other circulating coins.

On the Type 1 Buffalo nickel, the inscription for the date was placed on a raised background on the obverse that made it more likely to experience wear, just as the denomination “FIVE CENTS” appears on a raised mound below the Buffalo on the reverse. On Type 2 nickels the denomination is recessed below the coin’s rim, and other minor modifications were made so that the dates would wear more slowly and the coins would strike better.

“Dateless” Buffalo nickels do not carry much of a premium – they are typically worth about 50 cents, or about half the value of a common circulated one with a date. But they make great gifts for children or others starting off on their numismatic journey. They also have a rich history since dateless Buffalo nickels were used to carve original designs on them by transient or homeless folk artists, especially during the Depression, creating what are known as Hobo nickels. Today some of those Hobo nickels are worth thousands of dollars, and the coins are widely collected. 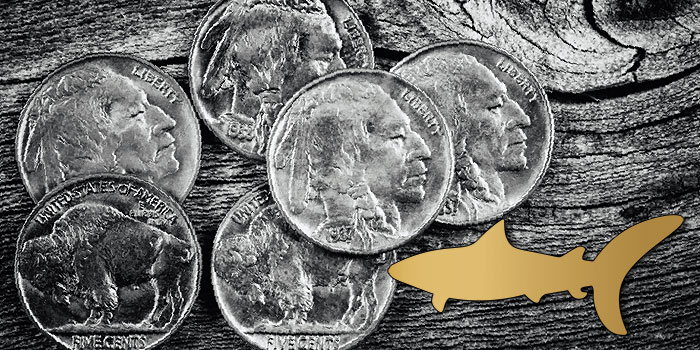 How Much Are Buffalo Nickels Worth?

1935 is one of the more common dates with over 58 million coins struck, but examples in high grades with full details are scarce, representing less than 1% of the coins out there. Luster varies for this date, and since there are so many available, you can find a nice example with some searching.

1936 nickels were the first coins of their denomination with a mintage over 100 million–118,997,000, to be precise. Compared to prior coins of this type, they struck better and tend to have good eye appeal and strikes, but examples with full details are hard to find.

1937 is a very common date with over 79 million struck, yet once again examples with full details are elusive. Did you know there is a modern, 21st-century nickel with a Buffalo on it?

In 2004 and 2005 as part of the Westward Journey nickel series that commemorated the bicentennial of the famous Lewis and Clark expedition of 1805, the United States Mint released a series of special one-year-only nickels with different designs, including the 2005 Bison nickel. This coin was designed by Jamie Franki, an American artist and sculptor who previously served on the Mint’s Artistic Infusion Program and teaches art and art history in North Carolina.

Because over 487 million were minted and the coins are still found in change, they are only worth face value unless they’re in high Mint State, especially MS66 and up. Graded Mint State coins are worth about $26 for MS65, $70 for MS66, and an impressive $1,000 for MS67!

These coins were also issued with Satin and Proof finishes.