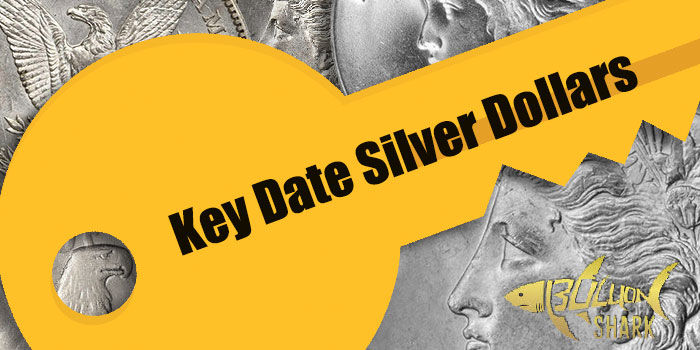 And like the vast majority of other coins, their values are determined by the scarcity of the date based on the coin’s mintage, the coin’s estimated surviving population, the condition of the coin, and how much demand exists for it.

May coins in the Morgan dollar series are affordable to most collectors. At present, there are about 30 coins in the series that trade for about $60 each in uncirculated condition, $75 in MS64, $130 in MS65, and $225 in MS66– based on the current PCGS Price Guide.

At the other end of the spectrum are the rarest Morgan dollars, where values reach into the several hundreds of thousands of dollars to even over one million dollars in top grades. While the most valuable coins in the Morgan dollar series have varied over time as hoards were discovered or very rare top-graded examples were certified, three coins have dominated this list: the 1893-S, the 1895, the 1889-CC, and the 1894.

Let’s break these three coins down.

The true king of the Morgan dollar series is the 1893-S, which has the lowest original mintage of the series at 100,000 and, more importantly, fewer than 12,000 coins are believed to have survived the government’s multiple major melts. The 1893-S is usually well struck, and the few Mint State coins that exist have good luster.

Almost 7,000 coins in all grades have been graded by PCGS, but fewer than 40 mint state examples have been certified by the company. PCGS estimates that 9,948 total pieces have survived of the original mintage, with 123 being uncirculated coins (editor’s note: These are very specific numbers for an estimate).

In fact, the 1893-S is the first Morgan silver dollar that sold for over $1 million. This was the coin owned at various times by Jack Lee and Cornelius Vermeule. This price was realized in a private sale that took place in 2008.

The 1895 Morgan dollar only exists in proof, though at one time it was assumed that circulation strikes also existed. This led to a decades-long wild goose chase for them. But a report from the United States Mint stating that 12,000 circulation pieces were issued is now believed to have been reported in error.

Only 880 1895 Morgan dollar Proofs were made, however, and most of these are believed to still exist. Though not the lowest-mintage Morgan dollar in Proof, the 1895 has long been seen as a series key because it is the only coin minted exclusively in Proof and it is needed for a complete set (editor’s note #2: contemporaneous to the release of the Morgan dollar, coin collectors did not discriminate between circulation strike examples or Proofs- or branch mint issues for that matter. With this view, the 1895 would have been a necessary coin to complete a Morgan dollar set. However, modern collectors separate Proof strikings from business strikes and typically collect business strikes by date and mintmark. Proof collecting, in a modern context, is a more specialized field).

The rarest and most valuable of the highly popular Morgan dollars struck at the Carson City Mint is the 1889-CC.

Amazingly, only one 1889-CC has been found in a GSA holder, and that unique example is estimated to be worth over $1 million based to the premium that collectors attach to the coin’s historic pedigree.

Because Mint State coins are so rare and expensive, most collectors acquire circulated examples of this very scarce date. The rarest circulation strike (based on mintage) Morgan dollar produced at the Philadelphia Mint is the 1894 issue, with an original mintage of just 110,000. PCGS estimates that about 9,000 examples exist today, with 6,500 of them being Mint State coins.

From the time it was struck until the early decades of the 20th century, this date was considered a major rarity. Most of the coins found today were discovered in the late 1950s and early ’60s when 1,000-coin bags of 1894 Morgan dollars were found.

Today there are several other Morgan dollars that are considered rarer than the 1894 in top grades, like the 1901, 1884-S, or 1883-S, with the finest known example – an MS67+ PL to be sold at auction in August — when it will likely bring around a half-million dollars or more.

The lowest mintage Peace dollar with 360,649 struck is the 1928. The 1928 issue tends to be softly struck and has average luster. The coin has long been considered to be a series key in terms of mintage, so many were saved in Mint State. This saving created the unusual circumstance that it is believed that fewer circulated as money those that survive in uncirculated condition today.

The original mintage of the 1934-S Peace dollar was over one million coins, but only 35,000 are estimated to still exist, including 4,500 uncirculated examples, according to estimates published on PCGS CoinFacts. PCGS has graded just over 7,000 in all grades.

The high value of gems for this coin is related to the fact that the coin was not believed to be rare in the 1930s and ’40s and so no major hoards containing the issue were ever found.

The other key to the Peace silver dollar series- because it is the first coin and the only high-relief issue- is the popular 1921.

The most important aspect of the 1921 Peace dollar is that it did not strike up well, with experts estimating that only 10 out of every 1,000 coins is well struck. Dies kept breaking when the coins were made, which led to the lowering of the relief for the rest of the series. Look for Peace silver dollars that are well struck in whatever grade you can afford.