I recently read a quote from a well-known dealer who (and I’m paraphrasing) stated that today’s dealer couldn’t build great sets for their clients due to an absence of great coins. While I don’t totally agree with this, I do feel this statement has some merit.

Before we begin, let’s qualify a big part of the above-referenced statement: What is a great coin?

In my opinion, “great” doesn’t necessarily mean “expensive”. A coin can be great based on its appearance or its rarity. Not all $50,000 coins are “great”, but I would slap this label on a coin like a $3,000 common-date AU50 Dahlonega half eagle with choice original surfaces and natural color.

If you’ve been around the coin business for 30+ years like the dealer I paraphrased above (and me as well…), it does seem that there are fewer great coins around than, say, in the 1980s and ’90s. We didn’t know it at the time but that was a Golden Era (pun intended) for rare gold coin availability.

So why do great coins seem so much harder to locate today? Here are a few reasons:

It pains me to write this but there have been huge numbers of coins ruined by doctoring in the last two to three decades. I place the blame for this on the grading services who rewarded a bright and shiny appearance above originality. With the value spread between grades so high, it was inevitable that a choice EF45 would be stripped and brightened to get into an AU55 holder.

Coins were doctored in the 1880s and ’90s, just not to the extent that they were in the 1980s (and beyond). And coins that were brightened in 1890 have had enough time to regain a pleasing second-generation appearance. It is also important to remember that earlier generations of collectors didn’t focus on rare-date 19th-century gold, meaning that the doctoring process on these coins is “fresher”. Many pre-1834 gold coins have been doctored (not only cleaned but smoothed or recolored) by past generations, but these often have acceptable appearances in today’s market. I can remember going to important regional shows in the late 1980s and the early ’90s and coming back with seven or eight really nice crusty Extremely Fine Dahlonega or Charlotte coins. Today, I’m lucky to locate two or three at a major national show. I now pass on 90+% of the dated gold I’m offered due to quality reasons. This was clearly not the case in the past and the blame can squarely be placed on rampant coin doctoring.

There Are More Collectors

While I can’t prove this statistically, I would assume there are more coin collectors in 2019 than there were in 1989 or 1999. If this isn’t a true statement across the board, it is certainly true in the areas in which I specialize. 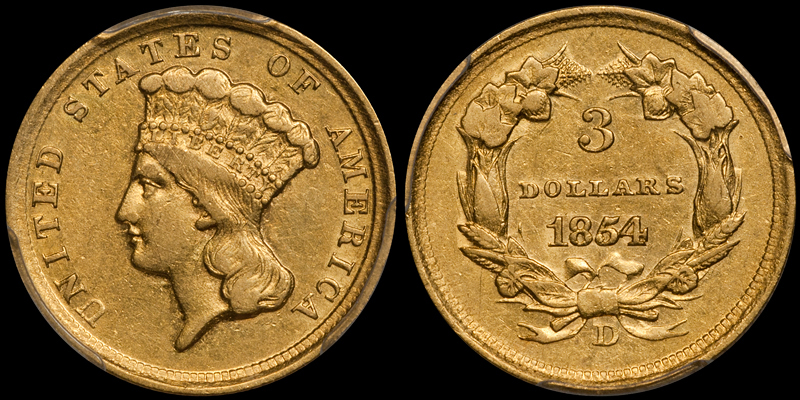 With a limited supply of great coins, it takes just a small uptick in demand to cause a notable shortage. And this is connected to the point I just made. Today’s collectors of dated gold are more sophisticated than those from the 1980s or the ’90s. This is attributable to the internet, which has made information far more available than in the past. Most collectors in 2019 understand the difference between a mediocre quality 1854-D Three Dollar Gold Piece and a nice one, and most collectors will pass on the schlocky coin and wait for a better specimen.

There are also more “super-collectors” in 2019 than there have been in the past. These are collectors whose sets contain nothing but great coins – often with multiples in the series they specialize in.

Back when the market was more investor-oriented, hold times were shorter. Investors were told that, if they held their coins for three to five years, they would make a profit. For a time, this was true. But once the market slowed down, investors left in droves and today we are left with a market that is primarily collector-oriented.

This is mostly a good thing for the market as I feel it is healthy for coins to be regarded more as a collectible with the potential to appreciate in price than as an investment vehicle. But it means that the ownership cycle for many great coins has lengthened. While there are certainly many great coins that bounce around a lot more than they should, many great coins now get held for 10 years or more. The Market Is More Efficient

The coin market in 1989, 1999, and even 2009 was extremely inefficient. A dealer might own a great coin but because there were no truly efficient ways to market them, it took longer to sell them. The most efficient way to sell a coin in 1989 was to put it in a Coin World ad, which had a lead time of three weeks. In 1999, if you were on the cutting edge, you sent out a fax list to 25-50 people once a week (mine went out every Sunday night and I can still remember having to enter each recipient by hand and feed each page of the price list into the fax machine). In 2009, the internet had become a factor but it wasn’t totally embraced by the coin market.

Cue to 2019 and the internet is totally pervasive. Coins bought in the morning can be imaged and described and then placed for sale literally a few minutes later. My selling system has become extremely efficient over the last few years, and many of the great coins I list on my site sell within minutes of appearing.

This increase in efficiency means that great coins sell faster than ever in today’s market. Unless you are well-connected with a dealer who handles coins in your specialty, it is harder than ever to buy great pieces.

Can Great Collections Be Built Today?

I’d say the answer is an unequivocal “Yes”, and this can be proven by any number of world-class sets that have been assembled in the last decade. But the market is more competitive than ever, great coins are more expensive than they have ever been, and it is clearly harder to find the right coins, especially if you are a collector doing all the work by yourself.

What are your thoughts about this? Make a comment in the section below or feel free to share an email with me at [email protected].