Over the last few months, a member of one of the coin forums I participate in has been posting images of some of his Lincoln cents a couple of times a week, with a poll of coin grading results he keeps track of as time goes by. This is a fascinating exercise, not so much because I like Lincolns — I appreciate them, but other series are more my style — but because it allows me the chance to practice my  grading skills. I’m not going to say that I’m leading the standings, because I’m not. But then, Heritage doesn’t pay me to grade coins. 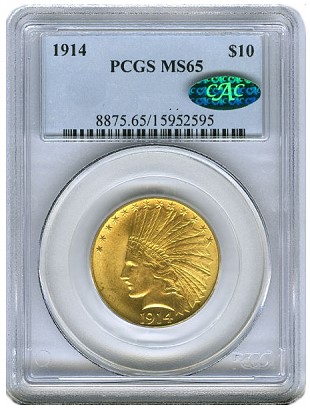 Third party coin grading services such as NGC and PCGS have done good business in recent years by encapsulating, authenticating, and assigning third party grades to coins. While I think they do an excellent job at this for the most part, this doesn’t mean that collectors can rely 100% on the grades printed on the slab. Not all coins assigned the same grade are equal.

CAC came on the scene, and for a fee they will review the grades that the major grading services assign. If the coin is at the upper end of the grade, it gets a green sticker. If CAC thinks that the coin should grade higher than the assigned grade, it gets a gold sticker. Examples of both are illustrated here.

There are resources that will help you learn to grade. For many years, the ANA has published The Official American Numismatic Association Grading Standards for United States Coins; this book is now up to its Seventh edition. There are several other books about grading on the market; all are good. Some others are; Grading Coins by Photographs, and Making The Grade.

Even the Red Book, among its many terrific features, has brief guides on how to grade each series. coingrading.com covers Heritage Co-Chairman Jim Halperin’s book How to Grade US Coins, a classic in the field, especially when it comes to grading uncirculated coins. And if you don’t want to drag a book or six around with you when you’re visiting a coin dealer or at a coin show, PCGS has a smartphone app, PCGS Photograde, that covers grading of all US coin series.

But, no matter how many of these books you own or have read, you need to practice. This is why I participate in the forum threads I mention at the beginning; it helps to keep me on my grading toes. One of the programs I’ve run at coin clubs is to bring in slabbed with the grades covered up and have everyone in the room assign grades. There haven’t been any prizes involved, at least yet, but this gives everyone a chance to practice their grading skills. If you have raw coins, look at them, with reference in hand, and grade them. Maybe not all of them, but enough to get some practice. It will pay off in the end.