It was 150 years ago that America’s greatest tragedy was coming to a close. The unimaginable tragedy of our deadliest war tore the United States apart, waging a regretful calamity of loss of life and property on a monumental scale. After more than four years of bloodshed, 1865 marked the transition from War to “Reconstruction.”

American Civil War history and memorabilia have a large following. All walks of people enjoy collecting coins, tokens, and money from the period.  Of course, there are many types of Civil War collectibles but none more popular and valuable than NGC and PCGS certified well-preserved U.S. Coins.  My view is that market trends favor this historically significant era based on the increasing awareness from the varied programs and focus at this “sesquicentennial anniversary” time. One unique coinage denomination of the era, which is not widely known or appreciated, is particularly interesting, and was in fact a result of the wartime struggle.  During the Civil War, hoarding of precious metals was so widespread that even the small copper-nickel cents had disappeared from circulation.  Numerous alternatives were tried, but failed.  This included private tokens, postal currency and fractional currency, to name a few.  All were unpopular, but today, are highly prized collectables.  The most disliked of these was fractional paper currency.  These small paper substitutes for coins wore out quickly and were easily lost.

In 1864, Secretary of the Treasury, Salmon P. Chase, proposed a new issue of three-cent postal currency. The result was legislation that was passed, and thus, the three-cent nickel was born.

The beautifully designed three-cent nickel, with its stately Greco-Roman liberty figure with coronet on the obverse and its classically-staunch roman value “III” on the reverse is simply outstanding. Although this denomination is non-traditional by coin investors, it is highly prized by collectors, making the key dates of the series a solid long-term asset. 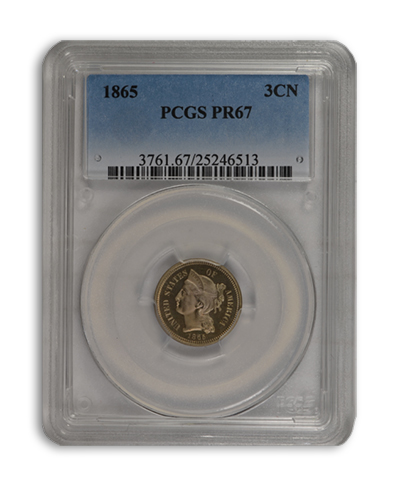 When investors ask me how best to approach the coin market, I always say buy the best you can afford for your particular budget. In most cases, that makes it quite challenging to acquire finest known, key dates or proof strike specimens, especially from popular periods of great historical significance. Below is an example of an item that I find especially intriguing, including the fact that it is from 1865, and is a first year of the issue.

One hundred and fifty years ago, the intriguing three-cent nickel series was introduced from Salmon P. Chase’s desire to rebuild the important postal system during a time when communication was sorely needed, making it something of a tribute to the end of war and the new beginning refereed to as reconstruction.

Considering this coin’s Proof Strike attribute, Finest-Known condition, Key-Date scarceness, First-Year of issue and it’s popularity, this beautiful specimen fits my blue-print as a cornerstone rarity for any collection.