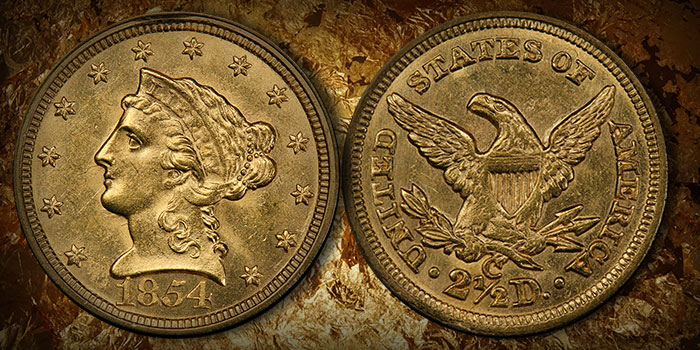 Douglas Winter Numismatics (DWN), located in Portland, Oregon, recently sold the single finest known example of the 1854-C quarter eagle. Graded MS63 by PCGS and approved by CAC, this coin is significant to collectors due to its rarity in higher grades.

The quarter eagle denomination was struck in Charlotte in two design types: the Classic Head (1838-39) and the Liberty Head (1840-1860). A total of 22 dates exist with two using the short-lived Classic Head design, and the remaining 20 employing the more-familiar Liberty Head.

As a date, the 1854-C is ranked as the sixth rarest overall of the Liberty Head issues from this mint. There were just 7,295 produced, and it is believed that around 150-175 exist today. There are likely not more than six or seven known in Uncirculated with this newly-graded piece being the clear finest.

On the DWN website, the coin was described as follows:

“This is far and away the best 1854-C quarter eagle I have ever seen and I really believed it had a chance to grade MS63+ or even MS64. It is well-struck for this issue on a choice planchet with ultra-attractive natural green-gold color on both sides. On the obverse there is a small patch of mint-made planchet roughness between the first star and the tip of the bust as well as some light clashmarks in the inner left field. The reverse is fully Gem on its own. If you are at all familiar with this date, you will quickly recognize its unimprovable quality.”

The coin was listed on the site at $70,000 USD and it sold quickly to a prominent Southern retail firm for an undisclosed amount.

According to Doug Winter, President of DWN:

“[T]his coin illustrates the prototypical coin we strive to offer. It was fresh to market, extremely choice, and fairly priced, in my opinion, given the current demand for interesting, significant and one-of-a-kind coins. We sell more ‘unicorn’ coins of this type than any other retail firm in the country, and we invite collectors searching for something really special to contact us.”

DWN can be reached via email at [email protected].