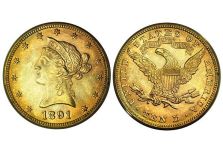 Description:
The $10 gold eagle was the largest denomination coin authorized by the Mint Act of 1792, but an unfavorable silver to gold ratio meant that gold coins were worth more silver in Europe than in the United States; thus to Europe many gold eagles were sent. Those that remained in this country were hoarded, so few eagles were used in commerce until a weight reduction in the late 1830s removed the incentive to melt the coins.

Eagles again appeared in circulation, but the start of the Civil War in 1861 caused the eagle and other coins to vanish from daily use, hoarded because of the uncertainty of the outcome of the conflict.

The horrendous toll of the war resulted in revived religious sentiment, and in a letter to Treasury Secretary Salmon P. Chase, Pennsylvania minister M. R. Watkinson proposed recognizing the nation’s faith in God on U.S. coinage. Chase approved the idea and IN GOD WE TRUST first appeared on the two cent coin in 1864. The Coinage Act of 1865 authorized the use of that motto on silver and gold coins. Engraver James Longacre placed the motto on the reverse of the gold eagle, on a furled banner above the eagle’s head.

Gold coins in general continued to be hoarded until well into the 1870s, and the $10 eagle was supplanted by the $20 double eagle as the primary coin for international trade starting in the early 1850s. The total number of eagles minted each year for the first decade was small and not until 1879 did the combined production from all mints in any one year exceed half a million coins. For several years after 1879, eagle mintages exceeded one million coins although for many years the total from individual mints often was less than 100,000 pieces.

On the obverse of the coin, a classical rendition of Liberty faces to the left, hair bundled at the back and secured with a beaded tie, but with two strands of hair cascading down the neck to the back and the side. The word LIBERTY stretches across a coronet resting above her forehead. Thirteen six-point stars encircle just inside a dentilled rim, broken only by the date centered at the bottom.

A left-facing eagle is in the middle of the reverse, wings outstretched with a Union shield across the breast. Three arrows are clutched in the sinister (viewer’s right) claw, an olive branch in the dexter claw. UNITED STATES OF AMERICA circles inside a denticled rim, broken into three parts by the eagle’s wing tips. A flowing banner with the words IN GOD WE TRUST appears in the space above the eagle’s head, below STATES OF. The denomination TEN D. is at the bottom, separated from the legend by a centered dot to the left and to the right.

Liberty Head Motto coins produced from 1866 through 1879 are generally more expensive than those from 1880 through 1907, even at lower grades. Few Mint State and finer coins from this early period have been certified, with near-Gem and finer rare and expensive. Coins dated 1880 and later and relatively affordable up to grades of near-Gem, except for most Carson City and some New Orleans and San Francisco issues, which are typically priced higher. Virtually all near-Gem and Gem coins from this period are expensive, as is the 1873 Closed 3 variety.