Ira and Larry Goldberg will auction The Ted Naftzger Collection of United States Large Cents in 2008 and 2009. The collection will be sold in two parts, the first of which will be of Early U.S. Large Cents, held on Sunday, September 14th, 2008 in Beverly Hills, CA and on Ebay Live.

Chris McCawley of McCawley-Grellman, who is cataloguing the coins, says, “This is the finest collection of large cents ever assembled or sold, and they’ve been off the market for 20-30 years. They are of exceptional quality, and many are the finest-known of their variety, in high grade mint and gem state. “

In addition PCGS included the follow description of the collection:

“R.E. “Ted” Naftzger was the undisputed King of United States large cents. His collection was the result of a five decade scholarly and relentless pursuit of the best. He kept meticulous notes on all the cents in his collection and any other high grade specimens that he encountered.

Naftzger’s acquisitions in the 1950’s and 1960’s formed a formidable collection of early, middle, and late date cents. During this period, he purchased several noted collections intact including Sloss, Clarke, Taylor and Gallo. He added the best cents to his set and auctioned lesser grade duplicates. The acquisition that put his collection on top, and probably never to be exceeded, was his 1973 purchase of Dr. Sheldon’s Early Date set.

Naftzger continued his aggressive acquisition posture in the 1970’s and 1980’s. In one instance, he rented a plane, flew it himself, through a storm, to acquire a finest known Classic head cent that had just come over from Europe. The Naftzger collection of large cents included the most famous large cents known to the numismatic community, such as the 1793 AMERI. Chain cent graded Specimen 65 by PCGS, the 1793 with periods Chain cent graded Specimen 67, and the amazing Atwater 1793 Wreath cent graded Specimen 68RD by PCGS. The Naftzger large cent collection was one of the greatest collecting accomplishments in numismatic history. “

CoinLink will have a series of Articles on both the collection and some of the interesting history surrounding the collection and it’s owner in future articles, as we beleive that this sale will indeed be one of the more important auctions of Large Cents, ever. 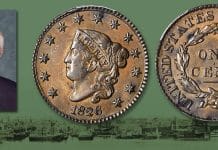