Thomas Cleneay was among the first and most ambitious coin collectors in America. He started collecting in the 1840s and, over the next four decades, built one of the finest and most complete collections of his time.

In each year from 1859 to 1888, Cleneay purchased Proof sets from the Philadelphia Mint, including complete sets of gold, silver, and minor coins. In addition, he pursued high-quality examples of earlier U.S. coins, including the rare Proof versions. When the Chapman brothers (S.H. and Henry) sold Cleneay’s collection in 1890, they described it as “…complete in all denominations with few … exceptions.”

However, “completion” had a different meaning in 1890. Cleneay’s collection was nearly complete as a date set, but not as a date and mintmark set. Cleneay collected coins during a time when little attention was paid to mintmarks. He acquired many mintmarked coins, but often only as a placeholder for a particular date.

Nonetheless, Cleneay accomplished more as a collector than virtually any of his contemporaries.

Thomas Cleneay was an attorney who lived in the Norwood enclave of Cincinnati, Ohio. By today’s standards, Cleneay would be considered both a vintage and a “modern” collector. His pursuit of high-grade coins of the vintage era (1793-1858) coincided with his annual purchases of “modern” Proof sets. During the time that Cleneay collected, premiums on Proof coins were relatively small, but few collectors could afford the gold Proofs because of their high intrinsic value. However, Cleneay was a treasure hunter by nature and he regularly sought out additional coins for his collection. His tastes were eclectic and included world coins, U.S. Colonial coins, medals, Indian artifacts, and Civil War tokens.

The Chapman brothers sold the Cleneay collection over a five-day period in December 1890. The sale consisted of 2,777 lots, of which 1,881 were American or U.S.-related. Premium versions of the sale catalog included 12 plates illustrating highlights from the sale. These plates have proven quite useful in matching reappearances of Cleneay coins in later sales and collections.

Unfortunately, many of his coins were not illustrated in the catalog, making it impossible to trace their pedigrees past the Cleneay sale. This is especially true of the gold Proof coins, many of which hide anonymously in modern collections without the benefit of the Cleneay association.

Highlights of the sale included the following: This was the finest and most valuable of Cleneay’s large cents, which is remarkable considering he had three Mint State Chain cents. This 1793 Liberty Cap cent is easily the finest of the variety and it has appeared, like many of Cleneay’s coins, in a number of big-name collections since. Col. James Ellsworth owned it from 1916 to 1923. William Cutler Atwater owned it until 1946, then Louis Eliasberg, Sr. owned it until 1996. As of this writing, it is part of the High Desert Collection.

It’s interesting to note here how the Chapman brothers and many of their contemporaries laid out their catalogs in the 1890s.

The largest denomination coins usually came first, followed by small denomination coins in descending order. In the American section of Cleneay’s catalog, U.S. Colonial coins came first, followed by Washington medals, gold U.S. Proof sets, then $20 gold pieces, $10 gold pieces, and so on. Silver Proof sets separated gold dollars from silver dollars, and minor Proof sets came after half cents. This ordering was, to a great extent, the opposite of the way sale catalogs are ordered today, and there is a tendency nowadays to pluck out the rarest and most valuable coins and place them, in order, in their own separate section. Yes, that’s right, this coin sold for 50 cents over its face value in 1890, after Cleneay owned it for who knows how many years. This author has written before about how easy it was for collectors of means during the 1800s and early 1900s to amass collections of amazing quality coins at inconceivably low prices that encourage the invention of a time machine. Many of Cleneay’s gold Proof sets, with a face value of $41.50, sold for anywhere from $45 to $50 a set. It is hard to conceive that an 1888 gold Proof set, containing a gold dollar, quarter eagle, three dollar gold piece, half eagle, eagle, and double eagle could sell for $45, but that’s what the set was worth in 1890.

This 1846-O eagle is the finest example known today. It has no price records beyond the year 2000, but suffice it to say that it is worth considerably more than its face value. 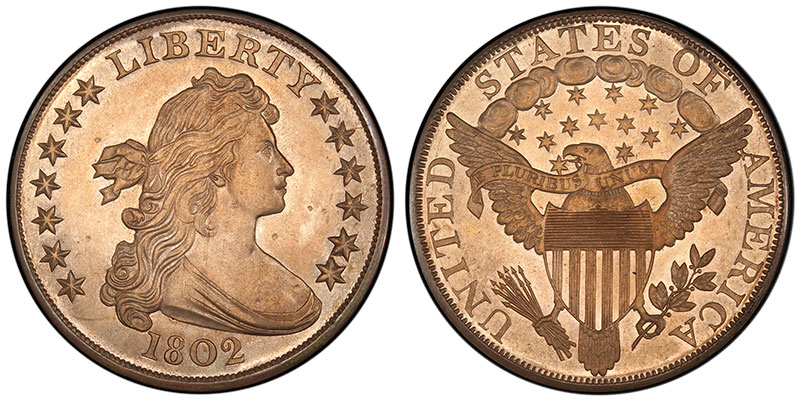 Cleneay had a nice run of silver dollars from 1794 to 1886. It appears that he obtained many of the later dates from circulation, as the condition ranged from Fine to Uncirculated. Once again, collector demand for such coins was low, with some silver dollars selling for face value and some Trade dollars selling for as little as 80 cents each. Included among his silver dollars are three intriguing items that may or may not live up to today’s standards: 1882-CC Proof; 1883-O Proof; and 1884-O Proof. This is an extremely rare coin, of which perhaps six or seven business strikes are known, as well as two Proofs. Cleneay’s was (and is) the finest known of the business strikes and second only to the Gem Proof in the National Numismatic Collection at the Smithsonian Institution. This was easily the most valuable of all of Cleneay’s half eagles. Byron Reed snapped it up and added it to his collection in Omaha, Nebraska, where it remained until 1996. It passed through the D. Brent Pogue Collection in 2016 and now resides in the D.L. Hansen Collection.

Once again, it is a delight to scroll through Cleneay’s half eagles and to contemplate how nice it might have been to pick up circulated Charlotte and Dahlonega half eagles at face value. As a type, the 1798 Small Eagle, 13 Stars silver dollar is fairly common, but Cleneay’s example is the best of the bunch. It was recognized as a condition-rarity even back in 1890 when it was among the price leaders in the sale. After spending nearly 125 years in the collections of Peter Mougey, Col. E.H.R. Green, and Eric Newman, it joined Bruce Morelan’s fabulous collection of Mint State Flowing Hair and Draped Bust dollars in 2013.

Bruce, who is justifiably proud of his Bust dollars, said this about the Cleneay 1798 Dollar in a 2016 interview: “…it is the only 1798 Small Eagle [Dollar] that I’ve seen that actually has luster.”

Of the 2,777 lots in the Cleneay Collection, the author has positively identified only 46, though there are undoubtedly many more out there that could be linked to this remarkable collection. As others are revealed, the breadth, scope, and quality of the Cleneay collection will be uncovered. In the meantime, the author recommends a stroll through the collection as it appears on the Newman Numismatic Portal, where the Cleneay sale catalog has been scanned and made available free of charge to all. A Trio of Amazing Gold Dollars Recently Sold by DWN