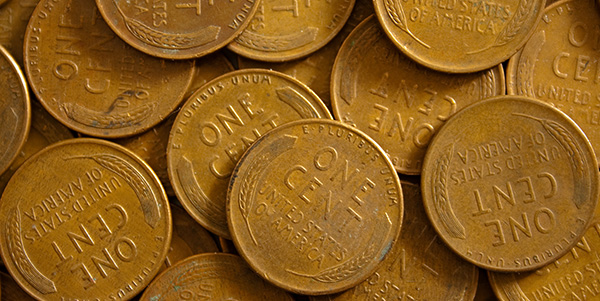 The Lincoln cent has been issued continuously since 1909, longer than any other coin currently produced by the United States. It has seen three different reverse subtypes during that period while retaining the same obverse (apart from slight modifications) and it is a coin that has long appealed to both beginning and advanced collectors. Many collectors got started with these coins at a young age.

Of the three reverses used on the coin, the original wheat stalk reverse used from the coin’s debut through 1959 (when it was replaced with a design of the Lincoln Memorial) is the one most beloved to collectors. That has a lot to do with the fact that most of the rarer issues are from this period, including the series key, the 1909-S VDB. The wheat reverse was intended to symbolize prosperity.

The origins of the coin lie with President Theodore Roosevelt, who met in 1905 with famed sculptor Augustus Saint-Gaudens when the two discussed the artistic state of American coinage. Roosevelt later commissioned Saint-Gaudens to redesign the entire gamut of U.S. coins from the cent through the double eagle. Saint-Gaudens produced arguably the most beloved designs of all time for the $10 and $20 gold coins and prepared sketches for a new cent featuring Liberty on it, but the design was never used. Saint-Gaudens passed away in 1907, a year before the commercial debut of his gold coin masterpieces.

Roosevelt’s vision was eventually carried out from this time through 1921 by several different artists and this period is known as the renaissance of American coinage.

Roosevelt considered President Abraham Lincoln the greatest Republican president and saw himself as Lincoln’s political heir. He thought that a new cent timed to commemorate the upcoming centennial of the slain president’s birth in 1809 would be merited. He admired a plaque that had been created by Lithuanian immigrant and sculptor with a numismatic focus Victor David Brenner that featured a right-facing side profile of Lincoln, making him an ideal candidate to design the new coin.

The Mint Director of the period commissioned Brenner to redesign the cent that had been using the Indian Head design since 1859. Brenner submitted his Lincoln and wheat penny designs, which saw some modifications, including some he did not approve of such a lowering of the bust from extending to the top edge of the coin as he prepared it, which was likely done to add the inscription, “IN GOD WE TRUST”, which was also not on his original design.

But the biggest controversy surrounds the artist’s efforts to give himself credit on the coin as its designer – something that is commonly done on U.S. coins with some form of the artist’s initials. The artist’s design originally included his entire last name on the reverse. When told by the Mint that his name would be obtrusive there, he changed it to his three initials, “VDB”, which then appeared on the first coins struck — 1909 and 1909-S cents released on August 2, 1909. The coins were greeted with a remarkable degree of interest that many called a frenzy. But within three days the Mint stopped producing those coins and removed the initials after 484,000 of the original version had been made. There had been discussion of replacing Brenner’s full name with the first letter of his last name, but that was not done because Charles Barber, the Mint’s chief engraver at the time, did not want it to be confused with the “B” that appears on the silver coins he designed.

Many have suggested there was public outcry about the use of the “VDB” initials as advertising for the artist, but researchers like Q. David Bowers note that they found no press reports of the time, nor Treasury records, that corroborate that view, which he considers to be folklore.

Moreover, the numismatic community objected to the removal of the initials, noting that it was inconsistent with past practice since coins like the gold ones designed by Saint-Gaudens featured three initials while others used just one. They and Brenner compared it to an artist’s signature on a painting.

In 1918, not long after Charles Barber’s passing in 1917, a smaller set of initials was added to obverse under Lincoln’s shoulder.

How Much Are They Worth?

At the time of publication, a wheat penny is worth at least 1.85 cents based on its 95% copper content at current spot values. This is the value for circulated examples of the most common coins. Such cans are readily available in rolls and in bags of 5,000 coins.

Individual dates can be worth anywhere from those values to tens of thousands for the rarest dates in top condition.

Keep in mind that because copper oxidizes over time, it is very important to store your valuable cents properly as they could change color and lose value if not stored in as airtight an environment as possible. Mintages were high during this period due to increased demand for coins in circulation during World War II.

1945 Wheat pennies are also common with a little over one billion made and values again similar to type coins, but many have blotchy surfaces, so care should be taken to find a nice example.

1946 is another common date with close to a billion made and similar values as the 1944 and 1945 coins. Strike and sharpness vary for this date, but it should not be difficult to find examples with fully struck details on them.

Collecting Lincoln Wheat pennies can be done in endless ways and on every budget depending on your goals as a collector of this hugely popular series.