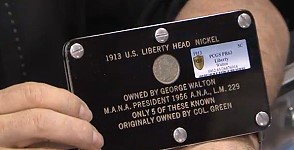 Why would someone spend more than $3 million for a nickel?

Larry Lee, owner of Coin and Bullion Reserve in Panama City, Florida, shares what made him decide to purchase one of the most famous and valuable coins in the world, the Walton 1913 Nickel.