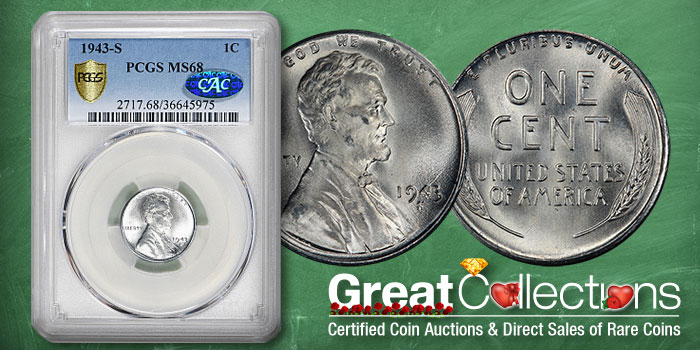 On Sunday, February 10, bidding closed on several high-quality Lincoln cents offered on GreatCollections.com. Below are a few noteworthy selections.

The 1929-S didn’t see a great deal of circulation due to the Great Depression, but circulated examples of the issue are not uncommon today. Many people also saved rolls of coins during the Depression and so average-grade Mint State specimens from 1929 are not unheard of, either.

Still, few 1929-S Lincoln cents come as nice as this one, graded MS-66+ RD by PCGS in a Secure Shield holder and approved by CAC. PCGS lists a population of three for the grade with none higher. NGC lists zero at 66+, with three higher in 67.

After eight bids, the coin sold on GreatCollections for $11,822.62 USD (including buyer’s premium).

Interestingly, the auction record for a 66+ Red was set only about a month ago at the 2019 Winter FUN Show, where Heritage Auctions sold an example for $14,400. At the 2016 Winter FUN Show, Heritage sold another MS-66+ 1929-S for $7,050, making last Sunday’s price on GreatCollections something of an average in the current market.

With the advent of World War II, the economy began to recover from the Great Depression, and the United States Mint increased coin production to meet growing demand. As an example, the business strike version of the 1941 Lincoln Wheat cent had a mintage of almost 900 million pieces (compared to just over 50 million for the 1929-S mentioned above).

But only 21,100 proofs were struck in 1941, and high-grade proof examples like the one offered by GreatCollections last weekend are relatively hard to come by – as evidenced by the fact that it garnered $8,156.25 (with buyer’s premium) after eight bids.

Copper and other industrial metals were vital to the war effort, and since production of the Lincoln cent consumed a significant amount of copper, the United States began experimenting with alternative materials to serve as possible replacements for the metal in coins. After trials by private companies that included plastic and glass, the Mint decided to strike pennies made of steel and coated in zinc. These steel cents were produced for only one year, though a handful dated 1944 are known.

Steel cents dated 1943 were struck at the Philadelphia, Denver, and San Francisco Mints, with the 1943-S being slightly more scarce than the 1943 and the 1943-D. On Sunday, February 10, GreatCollections offered a CAC-approved example from San Francisco graded PCGS MS-68 that sold for $4,331.25 (including buyer’s premium). PCGS has graded 87 coins at MS-68 with none finer, and NGC has graded 41 (also with none finer).

1909 was the first year of production for the Lincoln cent, being the 100th anniversary of the birth of 16th president Abraham Lincoln. Upon release of the coin, concerns were raised about the prominent initials of designer Victor David Brenner (“V.D.B.”) placed at the bottom of the reverse. Ultimately, the Mint decided to remove the initials from subsequent issues, with the new cents distributed as early as August of that year. But while a total of 27,995,000 1909 VDB Lincoln cents were struck at Philadelphia, only 484,000 VDB cents were struck at San Francisco – making the 1909-S VDB Lincoln cent the lowest business strike mintage of the entire series.

As such, demand for the coin has always been high (just ask the counterfeiters), and even a mid-grade Mint State example attracts ample bidding at auction. Graded MS-64 RB and approved by CAC, the piece offered here by GreatCollections sold for $1,903.50 (including buyer’s premium). The PCGS census reports a total of 1,965 examples graded MS-64 RB, and NGC reports 862. The top grade for Red-Brown at PCGS is MS-67, with a population of one; at NGC, the top grade is MS-66, with a population of 44.

The price realized last Sunday is in keeping with this year’s market. A specimen sold at the Heritage Long Beach sale earlier this month earned $2,160, while examples on eBay pulled $2,000 and $1,887.