The term “original” is used and misused frequently by collectors and dealers alike. As a dealer who uses this term frequently, I am often asked what constitutes originality. I thought this concept would be illustrated with good quality images of four choice, original early gold coins which I recently sold.

Before I show and discuss these coins, a few words on “originality”. There is no way to know for certain that a 200-year-old gold coin is virgin original. In this case, I mean the knowledge that a coin has never been cleaned/lightened/enhanced/processed/etc. during its life. There are coins that have an original appearance but that likely were judiciously cleaned many, many years ago and have acquired attractive secondary toning, which can easily be mistaken for original skin.

Early gold coins (those struck from 1795 to 1834) have been popular with collectors since the early days of American numismatics. This popularity has been both a blessing and a curse; the former because this meant more were saved due to their known rarity and the latter because they have been “overloved” by collectors seeking to improve their appearance.

It is my opinion that probably no more than 5% of the known early US gold coins which exist would qualify as “original” by my standards. Now this doesn’t mean that the remaining 95% are “bad” coins. There are early gold coins which have been dipped or lightened which have a pleasing, albeit commercial appearance, and many are readily accepted in the current market.

Let’s take a look at these four coins. Study the accompanying images first and then read my commentary afterwards. 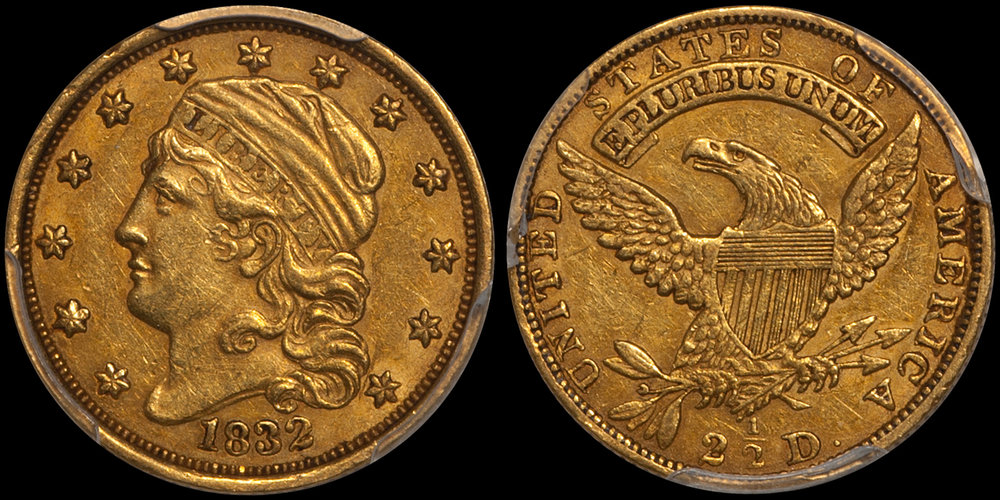 What is most unusual about this specific coin is that it has the “dirty circulated” appearance seen on Classic Head and Liberty Head quarter eagles but almost never on the Capped Head Left design. I have handled dozens of AU55 to AU58 Capped Head Left quarter eagles and these coins always have a different look; like Choice Uncirculated coins but with light friction on the high spots.

The first thing to notice about this coin is its rich, even golden-orange coloration. Notice the richness of the color and the dirt, which is caked in the recesses of the stars and the lettering. It is impossible to fake color like this as it is the product of 175+ years’ worth of proper storage. Fake color tends to be brighter and more vivid than this and even the best coin doctors can’t create soft, mellow hues like the ones on this coin. It never ceases to amaze me that there are 200-year-old-plus gold coins with a “fresh from the mint” appearance. While most Bust Left half eagles were melted, used in commerce or altered by future owners, there are a handful of high grade pieces known with an amazing cosmetic appearance.

This specific coin is not “dark and dirty” like the other coins in this blog but it is no less original. Look at the luster on both sides and note how there is an aura of frost in the left obverse field. If a coin is dipped, it loses this “top layer” of skin and is not as vibrant as on this coin. Notice, as well, that the fields lack any breaks in the luster on the high spots or in the open fields; especially on the left obverse, which is the “giveaway” area for friction on this design. Also, note the even color and how the shade becomes ever so slightly darker in the protected areas on the obverse and the reverse.

As recently as a decade ago, it was still not uncommon to locate a common date Bust Right or Capped Bust Left in higher grades (MS63 to MS64) with this natural vibrant appearance. But many such coins were dipped or altered and now most of the coins in this grade range have a somewhat “tired” appearance. For reasons that I still do not know, a few dates in the Fat Head half eagle date run (specifically the Large Planchet issues of 1813-1829) show vivid, rich coloration. Specifically, these include the 1814/3, 1818 and the 1820. For each of these dates, I have seen a few coins with absolutely sensational, deep original color–usually with a reddish-gold or deep amber gold hue.

I would guess this specific 1820 half eagle acquired its vivid “old gold” color from having been stored in a coin cabinet but I don’t know this for sure. I first handled the coin over a decade ago and was immediately smitten with its color. I re-acquired it recently and it quickly sold to a Northwestern collector assembling a gold type set.

Take a look first at the obverse. Notice the evenness of the color and it seems to lie evenly on the fields. Notice the configuration and how it has some lightness on the chin and throat. This pattern is too sophisticated to be applied by a coin doctor. Now look at the reverse. Notice how the hue matches that on the obverse and how the color appears consistent, even with the dentils. Finally, look carefully at the marks on both sides and note that the color doesn’t appear more intense at these areas. Fake color is typically applied with the heaviest hand(s) to hide marks and a good giveaway is when deep color hides scratches or scrapes in order to fool the viewer. I’ve saved the best coin for last: a lovely 1833 half eagle housed in a very old green label holder. I bought this coin around a decade ago and loved it then. When I re-acquired it, I loved it even more and I feel it is a “lock” upgrade by today’s standards.

The second type of Fat Head half eagles (1829-1834) are a funny group of coins. Obviously, they are all very rare with over 99% of the original mintage melted in 1834 and afterwards due to the coins being worth more intrinsically than face value.

When Fat Heads come nice, they come really nice. If you know this series, you are aware that they possess a unique soft, almost “fuzzy” luster that differs from the earlier Fat Heads or the Classic Heads which soon followed.

This coin has very attractive medium golden-orange color, consistent in hue and similar on both sides. You just can’t fake color this good and the more early gold coins you look at, the easier real color is to determine. As you study this type, you will also learn that most higher-grade examples have been dipped or lightened and they tend to exhibit a hue that is more of a light lemon-gold than the rich orange hue seen on this coin.

You aren’t going to turn into an expert on early gold based on looking at the images of four coins but hopefully this blog is helpful. I would strongly suggest you spend time looking at the images in the Coinapedia section (or even our newly-launched Instagram feed). These coins are not for sale but they represent some ultra-original pieces that DWN has sold to collectors over the years.