Though they aren’t worth much on their faces, pennies are some of the most fun coins to chase as a collector. That said, there’s a big difference between common pennies that might not be worth your time and those with historical and collectible value.

Wheat cents (or wheat pennies as some call them) are some of the most sought-after one-cent coins. Wheat cents are one-cent coins that were made by the United States Mint from the years of 1909 to 1958. They’re called “wheat cents” because the reverse of each coin includes a wreath of wheat. The phrases “One Cent” and “United States of America” can be seen in between the wheat sheaves.

Since wheat cents were minted for quite a while, there are millions of potential coins to chase after. Here are seven of the rarest — and therefore some of the most valuable — wheat cents to check out.

In 1931, the San Francisco Mint created a series of Abraham Lincoln wheat pennies. Notably, these pennies were only minted in quantities of up to 866,000, which is much lower than the average mintage (typically in the millions).

Since this cent was hoarded by people due to the dramatic economic uncertainty of the Great Depression, you can sometimes purchase uncirculated-grade variations of this coin. The 1943 copper cent, also sometimes called the 1943 bronze cent, is one of the most sought-after coins in all of America. The bronze wheat cent was produced because of an industrial need for copper during World War II.

At this time, the United States Mint stopped using copper for its cents and switched to zinc-coated steel cents instead. That said, a few copper planchets were left in the hopper, so they were used to strike 1943 dies, resulting in rare copper 1943 Lincoln wheat cents.

These can be fraudulent, however. Use a magnet and see if it picks up the cent if you suspect a fake. If the cent is attracted to the magnet, it’s likely counterfeit. 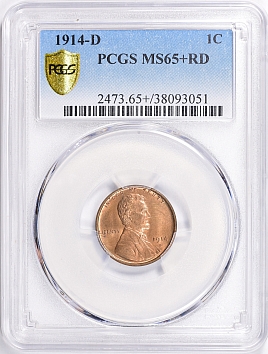 The 1914-D wheat cent was minted in Denver, and it’s arguably the most valuable non-error cent sought after by collectors. Only a little over 1,193,000 were minted in total, making it quite rare compared to other cents of its type.

It’s tough to find uncirculated varieties of these coins, but it’s popular nonetheless. Some of these cents have sold for over $150,000 USD in high grades.

The 1922 No D Lincoln wheat cent was produced by the Denver Mint. But notably, it doesn’t actually have the “D” mint mark as indicated by its name. The mint in Denver was under a lot of pressure to produce tons of coins at the time, so sloppy processes interfered with perfect coin creation. The 1909-S VDB wheat cent was minted in San Francisco. This is one of the toughest wheat cents to acquire – though it is also one of the most popular). It’s marked by the iconic “VDB” initials of the coin’s designer, Victor David Brenner, at the bottom of the coin’s reverse side.

Unfortunately, because this coin can be counterfeited quite easily, you’ll want any potential cents of this type to be authenticated before adding them to your collection. The United States Mint’s coin operators in Philadelphia must have been seeing double when these coins came off the presses. The doubling is clearly visible on all of the lettering of the 1955 doubled die, making it one of the most visually striking varieties issued over the course of the fifty-year long series.

While most collectors would be satisfied to own an example in any grade, examples in Mint State with full original red sell for $10,000 and up! 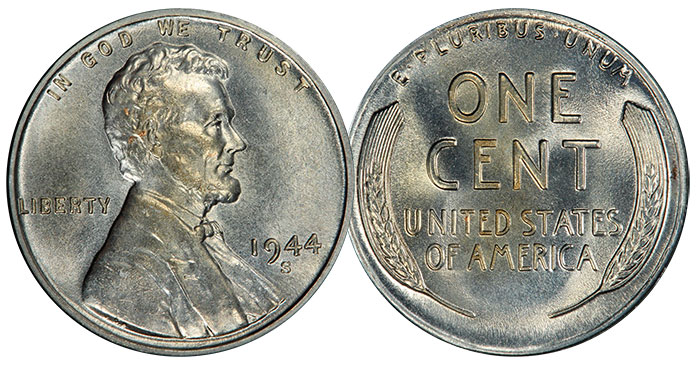 The 1944 steel wheat cent was an accidental cent made when steel blanks — either from foreign coins or left behind from minting processes in the year prior –— were mixed in with copper blanks and struck with cent designs.

As a result, these steel cents look silver, making them rare and quite aesthetically pleasing to look at. There are only approximately 25 to 30 of these rare pennies, so if you find one, hold onto it!

When it comes to collecting wheat pennies or other rare coins, you should know a few things to identify rare coins quickly and make the most of your collection.

Generally, rare coins, whether they be nickels, dimes, or pennies, have a higher numismatic value the fewer that were minted and the older that they are. For example, if you have a mint condition coin from the Carson City Mint, it may be more valuable than a coin from the Philadelphia Mint.

Some wheat pennies are also rare because of minting errors. Some wheat pennies were made with errors–like those lacking mint marks from their minting facilities, above–which also makes them rare and much more valuable for collectors.

Coins are also valued based on their grade on the U.S. coin grading scale. Grading services use the Sheldon 70-point scale to assign ratings to rare coins based on factors like eye appeal, surface imperfections, age, etc.

Grading isn’t the exclusive domain of big companies. You should read up on coin grading so you can determine what a rare coin will likely receive once it is graded by a numismatist at a third-party organization.

Wheat Cent Values: How Much Is an Average Wheat Cent Worth?

The typical wheat cent from a common date, provided that it is in uncirculated condition, is worth around 50 cents, which is a 50x increase from face value. Wheat cents were only made between the years 1909 to 1958.

This design was first minted to commemorate President Abraham Lincoln’s 100th birthday anniversary. They are printed with the phrases “In God We Trust” and “Liberty” on the front and “E Pluribus Unum” on the back.

Wheat cents are not universally made of valuable materials like bronze or copper. For example, the first wheat cents were made of bronze, which is an alloy that is 95% copper and 5% tin or zinc alloy. In 1943, new wheat pennies were made with zinc-plated steel instead.

Wheat cents produced a bit of controversy shortly after entering circulation, however, due to the initials “VDB” at the bottom. The Mint ordered the initials removed, although they were reinstated in 1918 and placed below Lincoln’s shoulder. The wheat cent was removed from circulation on the 150th anniversary of Abraham Lincoln’s birth.