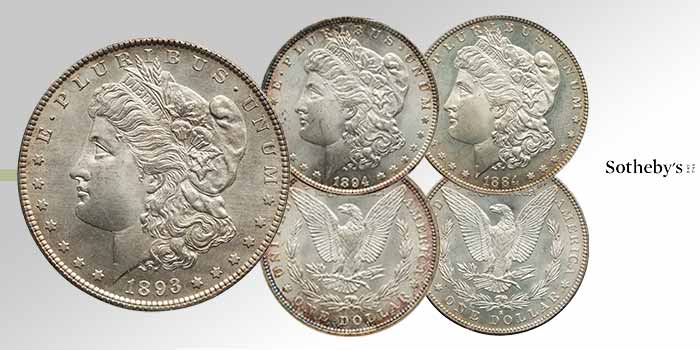 Sotheby’s May 21 auction of Historic Coins & Medals in New York City totaled $5.1 million, with an incredibly strong 98.5% of all lots sold. Out of the 202 pieces offered today, 89% realized prices above their high estimates.

The sale centered on the Ralph and Lois Stone Collection – a fine collection with exceptionally high grades of preservation of the rarest dates in the series – which was 100% sold. The Stone Collection also had the two top lots of the sale; an 1884-S Silver Dollar, PCGS MS 67 CAC (above left) and an 1893-S Silver Dollar, PCGS MS 65 CAC (above right), each of which sold for $735,000, tying for the second-highest price ever realized for a Morgan Dollar at auction. With today’s results, Sotheby’s now holds three of the top 10 auction prices ever realized for Morgan Silver Dollars.

Richard Austin, Head of Sotheby’s Books & Manuscripts Department, New York, commented: “Monday’s great result can be attributed to a combination of rarity, condition, provenance and rediscovery. With virtually all lots sold for prices above expectations, we look forward to Sotheby’s continued re-emergence in the coin market.”

One of the very rarest of silver dollars to be found so perfectly preserved. There are no auction records of any examples even remotely as fine as the Stone example having ever appeared at public auction. This was purchased from the collection of a man legendary in silver dollar collecting circles, Jack Lee.

This is one of the finest known examples of this classic rarity. Only 100,000 were struck, making it the rarest date struck for circulation in the series. The date is one of only two included in the standard book by Jeff Garrett and Ron Guth, 100 Greatest U.S. Coins.

This remarkable coin was once called by the founder of PCGS the “finest 92-S I have ever seen”. It was in the collection of the late silver dollar collector Dr. George Bodway, and was part of the 1990-1991 PCGS Tour of the ”World’s Finest Silver Dollars” exhibition, which culled the finest examples known from more than two dozen collections.

About Sotheby’s Coins and Medals

Sotheby’s is the oldest auctioneer of coins in the world, having held their first auction in 1755 with the sale of the Dr. Richard Mead Collection. A few landmark Sotheby’s coin and medal sales this century include, in 2002, Sotheby’s (in conjunction with Stack’s), the famed 1933 double eagle for a world record $7,590,020; in 2007 the Washington-Lafayette Order of the Cincinnati for $5.3 million (the world record for a medal); and between 2015-2017 (in conjunction with Stack’s-Bowers) the D. Brent Pogue Collection, which brought in excess of $100 million — a world record for any collection of coins ever sold at auction.