Any collector knows that a good story adds to an item’s value. The stories themselves, however, cost nothing. Here are 10 story coins and notes you can buy for very little.

A US $1,000 bill is impressive, but why stop at a mere 1,000 units? How about a Germany 100 billion marks (1920s), a Yugoslavia 100 million dinars (1990s) or a Zimbabwe 1 trillion dollars (2000s)? Several nations printed notes with huge denominations to keep up with runaway inflation. That same inflation soon made these notes obsolete and most are easy to find at low cost today. The highest denomination ever, the Zimbabwe $100 trillion, sells for $35. If you can live with a measly 20 trillion Zimbabwe dollars, however, it’s yours in the $6 – $10 range. The Yugoslavia and Germany notes can be even less.

A good story doesn’t have to be true.

Most collectors know that 1916 and early 1917 Standing Liberty quarters featured Miss Liberty with one breast exposed. The public objected, and, in an overreaction, she was covered in armor in later issues.

A good story, but contemporary newspapers and Mint correspondence mention striking difficulties, not nudity, as the reason for the change. The 1917 Type 1 quarter, however, remains one of the great US story coins and is affordable in modest grades.

With the block letters HAWAII on front and back, Hawaii notes immediately stand out. Most people forget that, when World War 2 started for the United States, we were losing. The Japanese damaged our fleet in Hawaii and captured the Philippines. There was fear that Japan would return to Hawaii, possibly conquering the islands.

To keep US dollars out of enemy hands, the Treasury Department had all cash in Hawaii replaced with the overprinted notes. If the Japanese overran Hawaii, the United States could demonetize the notes, making them worthless. The invasion never came, of course, and enough were saved as souvenirs that they remain under $20 in circulated grades. If the previous item tells a story of the start of the war, then 1944 – 1945 US-Philippines coinage tells a brighter tale of the later years of the war and its aftermath.

When the United States recaptured the Philippines in 1944, we once again began supplying the islands with coins and notes in great numbers. Notes resumed pre-war designs, but with large VICTORY overprints. The coins are attractive, with deep dishing and high relief, and many were saved in mint state as souvenirs. These items also tell a story of self-determination. So many 1944 – 1945 issues remain because they circulated for only two years before the Philippines achieved independence in 1946.

The large silver eight reales is the ancestor of the US silver dollar and gets most of the attention in Spanish colonial coinage.

For the same amount of history and romance at a much lower cost, look to the quarter-sized two reales. Either the “pillar” style with the coat of arms or the “portrait” style with a long-dead king, this coin has that “pirate treasure” look valued by collectors and by the general public. This money is the physical representation of the Age of Exploration and the New World.

A well-circulated example made in Mexico or Bolivia is easy to find for under $15 but is an impressive piece to a non-collector. Pose this question to the same non-collector friend: If the nation ran out of coins, would you make your own?

In tough times, people hoard gold and silver. During the Civil War, gold coins, then silver coins, disappeared from the marketplace and eventually even pennies were hoarded. Business needing small change began making their own pennies, either imitations of government cents or with advertising. The issuing merchant adds to the story, especially tokens with a hometown address or another personal connection. Common circulated tokens go for as little as $15.

Continuing with the Civil War theme, you can pose this additional question. You’ve seen a $1 bill and a $5 bill… even a $100 bill… but have you ever seen a 25-cent bill?

With not enough silver to make dimes and quarters, the US government issued notes for 10 cents, 25 cents, and other small denominations. An average circulated note made in the 1870s after the war can be yours for as little as $10.

A common item for numismatists, but a curiosity for the general public. 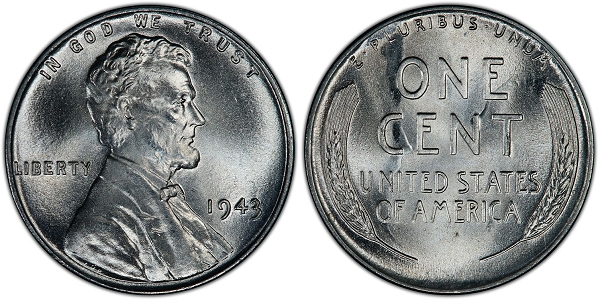 If there is one coin that combines a big story with a small price, it is the 1943 steel cent.

Although the tide of the war turned in America’s favor by 1943, the need for materials became increasingly acute. Homefront recycling and scrap drives filled some of the need. Americans turned in old rubber to make tires, cooking fat to make explosives, and copper to make ammunition. To save that copper, the US Treasury made cents from zinc-plated steel instead of 95% pure copper for one year.

Problems with rust and with striking the hard steel led the mint to seek another solution. The following year, recycled shell casings recovered from artillery and warships were used for copper cents. First cents became ammunition, then ammunition became cents. With millions saved, a circulated 1943 steel cent sells for well under 20 cents, or under $5 for typical uncirculated coins.

Coins of the Bible provide a popular specialty in ancient coin collecting and some collectors seek to obtain all coins mentioned in the New Testament. Although some coins of this set are inexpensive, the South Africa farthing of 1923 – 1960 gives an even more affordable entry to coins of the Gospels at about $4 in Red Uncirculated.

Matthew 10:29 in the King James translation reads in part, “Are not two sparrows sold for a farthing?” The word farthing (a one-fourth penny coin) was chosen by the 17th century translators as a small coin familiar to their British readers and somewhat similar to the Roman coin mentioned in the original text. Taking the passage as inspiration, the South Africa farthing depicts two sparrows, specifically native Cape sparrows. One can imagine a religious leader or teacher using the coin in a lesson. I still have the worn 1883 No Cents Liberty nickel, grading Fine and worth about $6, that was my childhood treasure. Most collectors know the story of how the new Liberty nickel of that year had a Roman numeral “V” for the denomination without the number “5”, the word “cents”, or other clarification. A few people gold-plated these coins and passed them as $5 gold pieces (or so the story goes…), leading to the addition of the word CENTS later in the year.

The fraud put coins in the public mind, and many were saved. Newsboys sold No Cents nickels for twice face value and a few of those curious buyers probably became lifelong collectors.

To add to the story, buy one of the so-called “racketeer nickels” plated with gold many years later to simulate the few nickels passed as gold in 1883. A modern racketeer nickel is a fake of a fake, adding another layer to the story.

Whether you read these stories, hear them from a friend, or even tell them to a non-collector, these objects provide some of the best narratives in numismatics. Sometimes, the stories are (almost) free.