Charles E. Barber, the sixth Chief Engraver of the United States Mint, set out to design a set of coinage consisting of a new dime, quarter and half dollar. While the coins would ultimately carry his name (“Barber coins”) he decided to invite artists to submit designs for the new pieces. Artists were asked to submit models in low relief for judging. Barber’s guidelines were more stringent than those of previous competitions. He required that each submission feature the lettering to be included on each piece so that he and others could get a sense of the final look of the complete piece.

While the competition was open to the public, Andrew Mason, the superintendent of the New York Assay Office, specifically called on 10 artists to submit entries. The list included renowned sculptures and painters like Daniel Chester French, remembered for his 1920 statue of President Abraham Lincoln, and Kenyon Cox, known for his multi-disciplinary talents ranging from sketch work to poetry. The winner would receive a $500 cash prize. However, soon after initiating the competition problems surfaced. The artists invited to compete responded with a list of amendments to the guidelines. They asked that each artist be paid for their submitted work. They also asked that the work be judged by their peers and that each coin would be designed by a single artist to ensure a consistent style within each piece. Finally, the artists requested more time to complete their work. Officials declined these terms. They cited limited funds explaining that they only had enough money to pay one winner.

In the meantime, the judges began receiving entries from the general public. After reviewing each they determined that none were suitable. Officials were disappointed by what they perceived as a lack of artistic talent displayed by the various attempts. Soon after, Barber took it upon himself to complete the design work.

Barber turned to French coinage for inspiration. Following these initial designs, Barber and Mint Director Edward O. Leech had several long communications with each other as they contentiously debated the best look for the coins. 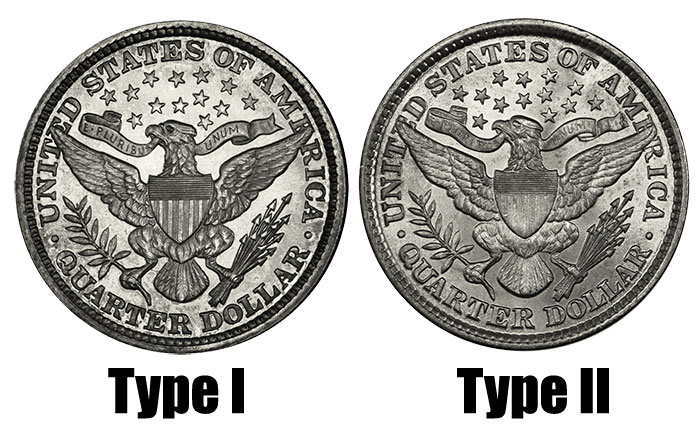 The final design of each denomination shows the head of Liberty with a crown of olive branches. The reverse side of the quarter shows a heraldic eagle with a scroll inscribed with “E Pluribus Unum”. Gripped in the right claw is an olive branch and in the left is a bundle of 13 arrows. Upon minting, the designs received mixed reviews. In time, changes were necessary, but not as a response to those who were critical of the design. Instead, the design adjustments were for a more practical reason; people complained that the coins would not stack properly.

As a result of the alteration, there is a “Type I” coin and a “Type II” version of the 1892 quarter. In 1900, Barber made additional changes to the quarter resulting in a thinner piece allowing for 21 coins to stack in the space of 20 of the previous version. Barber’s design was used from 1892 to 1916 with the 1901-S quarter remaining a considerable rarity, along with the 1896-S and the 1913-S.