The Saint-Gaudens $20 Double Eagle gold coin issued from 1907 to 1933 is almost universally viewed by collectors of American coins and numismatists as the most beautiful U.S. coin ever struck, especially when it comes to the 1907 Ultra High-Relief versions that display the full majesty and beauty of this amazing coin.

But this series, which includes a number of issues that are readily available in Mint State grades today because those dates were saved in large numbers, also includes several of the rarest U.S. coins of the 20th century – or of any century, for that matter.

There are also coins in between those extremes that are scarcer than the common issues but do not cost millions.

While you might expect the top coin on this list to be the notorious 1933 Double Eagle, there is, in fact, another coin in this series that is even rarer.

Keep in mind that just a couple of decades ago this list would have looked different as information that was not available then exists today, and researchers continue to make new discoveries about these coins.

With an original mintage of 180,000, almost the entire run is believed to have been destroyed. And while at one point it was thought that some may have made their way to Europe, most experts no longer think that is the case. Records indicate that the coins were kept in Denver until 1931.

Between 15 and 18 are estimated to exist, with nine having been graded by PCGS. In 1995, two examples of this super rarity were discovered in the Museum of Connecticut History that had been donated by a collector who obtained them when they were issued and consequently put them away. 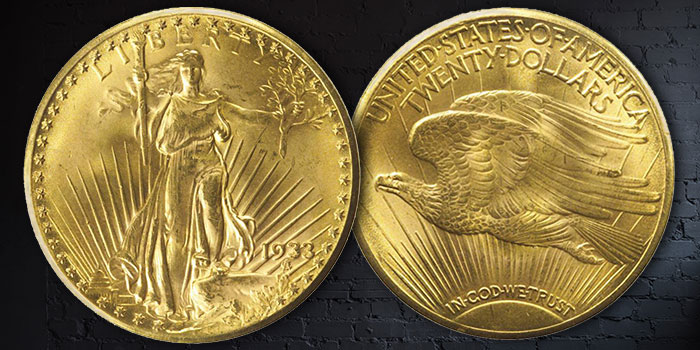 Much has been said and written about this coin over the years, and most collectors are familiar with it. There are 13 known examples today: two in the Smithsonian collection, the one that sold last year at auction, and 10 at Fort Knox that were once owned by the legendary Israel Switt, a Philadelphia jeweler who is believed to be the person who obtained all examples of the coins that made it out of the Mint. But in total there are 27 examples that are either rumored or known to exist, including some that were surrendered or returned to the government and melted after they had “escaped”.

This is the early version of the Saint-Gaudens gold coin that was produced for President Teddy Roosevelt to give as a wedding present to his daughter. It was the culmination of the project he began in 1901 when corresponding with sculptor Augustus Saint-Gaudens, in which Roosevelt said he wanted the nation’s coins to have the beauty and the relief of ancient Greek coins. It was Roosevelt’s idea to have a figure of Liberty standing on the obverse and a flying eagle on the reverse, whereas the sculptor preferred a Native American on the obverse, which was used for his famous pattern coin of that type.

The coins were very difficult to produce, requiring multiple strikes, and the relief had to be lowered later in order to make larger quantities for the public.

18 or 19 are believed to have been struck, and 13 to 15 are estimated to exist today. All the existing examples have been graded between Proof 67 and 69, and PCGS estimates the one that graded PF69 to be worth over $4 million.

This coin also served as the basis for the magnificent 2009 Ultra High Relief $20 gold coin, which is one of the key modern coins.

This coin only became known to numismatists in 2000 when Sotheby’s sold one of two examples for $203,500, while the second piece was auctioned in 2006 selling for $1,45 million. Neither was ever intended for circulation.

Mint records on how this piece came to be issued do not exist, but the coin sold in 2000 was struck at the request of the Mint Director of the time, Raymond T. Baker, for the birth of his nephew Joseph, who later consigned the coin. It is believed that the second coin was also struck for presentation to a VIP.

The 1921 Satin proofs were made when the United States Mint was experimenting with different Proof finishes on the Saint-Gaudens Double Eagle that was also used in 1921 on some Peace dollars. The second example, graded NGC PF64+, was sold again last year for $2,01 million.

The complete story of this amazing Satin Proof remains to be discovered. Most experts would agree that the next rarest issue of this series would be the 1930-S, which has the lowest number of known examples after the four coins discussed above (50-75 total), though there are several other issues (especially from the final years of the series) with under 100 known examples.

99.9% of this coin’s original mintage of 74,000 was melted down, which is why there are so few surviving coins.

The 1930-S is typically found very well struck, and the finest known piece that is estimated to grade MS68 is part of the National Numismatic Collection of the Smithsonian. Of the 50 coins graded by PCGS, all but five grade MS63 to MS66.