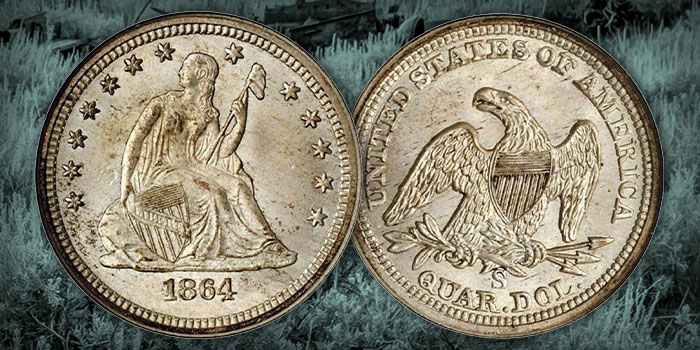 Consumers in San Francisco and along the West Coast were handling a rarity in the mid-1860s.

As their counterparts in the east were vanishing from circulation during the Civil War, silver coins in San Francisco were circulating much more extensively – including the 1864-S Seated Liberty quarter, which turned out to be a major rarity. Consumers might have known that the freshly-struck quarters were prized in the east for their silver content but might not have suspected that, decades later, the coins would be sought-after by collectors interested in their scarcity, not their precious metal.

The new branch mint began striking silver quarters and half dollars in 1855[1], even though, according to numismatic researcher R.W. Julian, “silver was not especially plentiful in California, most of it at that time being obtain as a by-product of gold mining[1]”. Gold bullion deposited at the San Francisco Mint contained 11% silver[2].

The economic uncertainty brought on by the Civil War drove coins from circulation in the east, forcing consumers to contend with an array of substitutes: fractional currency notes, encased postage stamps, Civil War tokens, Demand notes, and United States notes, among others[5]. The suspension of specie redemption deepened fears of economic collapse and further drove coin hoarding. Richard Doty explains in America’s Money, America’s Story (2008) that “Lincoln’s government floundered about for a number of years in search of a reliable, stable, but expendable fiscal medium[6].”

San Francisco experienced different problems. Specie was less valuable to people in the rapidly expanding city, as numismatist David Lange explains in History of the United States Mint and Its Coinage (2005):

“The withdrawal of gold and silver throughout most of the country was little noticed in the West. In a remote land where commodities were scarcer and more highly valued than cash, subtle variations in the relative values of gold and silver simply had no impact[7].”

Lange elaborated in the Numismatic Bibliomania Society’s E-Sylum in 2019 that “nothing [no denomination] smaller than a dime was in general circulation in California” in the 1860s[8].

With a large supply of gold and a population accustomed to unusual currency, sometimes reckoning prices in pinches of gold dust, far removed from most of the war’s carnage, coinage from the San Francisco Mint circulated much more extensively. This extended circulation resulted in what Heritage Auctions referred to in a 2017 listing as a “paltry survivorship” for the 1864-S quarter[9]. A Heritage Auctions listing from April 2019: “most of [the 1864-S quarters] circulated to attrition in the ‘hard money’ dependent West Coast economy[10].”

According to Larry Briggs, author of the Comprehensive Encyclopedia of United States Liberty Seated Quarters (1991), the coins were struck from one Type II obverse die and a pair of Type I reverse dies with a large “S” mintmark. Only one example was struck from the second die is known, according to Briggs[11]. Greg Johnson, a member of the Liberty Seated Collectors Club (LSCC), corroborates this in an email interview, adding: “They [the San Francisco Mint] never did convert to the Type II No Motto reverse[12].”

The typical well-preserved example of the issue will exhibit evidence of repunching of the first two digits of the date. As this feature wears down, the 1 may take on a blobby appearance.

An article written by Johnson and published in the E-Gobrecht, the online newsletter of the LSCC, in 2018 shared that a 2007 survey of LSCC members showed that the 1864-S quarter was the third-rarest Seated Liberty quarter stuck at San Francisco in members’ collections and the rarest No Motto piece from that mint[13]. In 1986, it was the rarest No Motto Seated Liberty quarter in club members’ collections[14].

The 1864-S quarter was voted among the “Ten Greatest San Francisco Seated Coins” in the March 2007 edition of the Gobrecht Journal[15]. 41% of respondents placed the issue in the top six entries on their lists[16]. Johnson elaborates that “[h]istorically, the 1864-S has been quite highly regarded as a rarity in the Liberty Seated quarter series[17].”

Because of its small mintage and extensive circulation, very few examples exist in About Uncirculated or Mint State, and such coins command high prices at auction, though John McCloskey explains that “[w]hile a rare date this issue [1864-S quarter] is not as difficult to find in mint state as several of the other early San Francisco quarters[18].” McCloskey’s study did point out that the coins were as rare as the rarest of the type in grades ranging from Choice Very Fine to About Uncirculated[19].

Johnson corroborated this in 2018, but offered that “recently, the scarcity of this issue on the market has only been more pronounced[20].”

The coin sold again in August of 2006 for $112,700 in the Bowers Merena auction at the 2006 Denver ANA Show[25]. In 2007, the coin was offered again at the Stack’s Brooklyn Sale & John Jay Ford XVII auction but was passed after not meeting the reserve.

Eliasberg purchased the coin in a private sale from the Clapp Collection, assembled by John M. Clapp, a Pittsburgh businessman and Civil War veteran who became a numismatist late in the 19th century[26]. Clapp became a serious collector in the late 19th century, participating in many of the period’s major auctions, and continuing into the early 20th century; he died in 1906[27]. His son John H. Clapp became an accomplished numismatist in his own right, and the collection both men assembled was sold to Louis E. Eliasberg Sr. in 1942, after John H.’s death in 1940[28].

The Clapp Collection contained many rarities and John M. purchased coins with mintmarks, a specialty of his, directly from the branch mints beginning in the 1890s[29][30].

The 1864-S Seated Liberty Quarter in the Recent Market

Circulated examples routinely sell for around $2,000 at auction, underscoring their appeal and rarity.

Like all of the No Motto Seated Liberty quarters before it, the 1864-S features the late United States Mint Chief Engraver Christian Gobrecht’s Liberty Seated design above the date on the obverse, cradling a shield in her right hand and holding a staff topped with a Phrygian cap in her left. Liberty’s shield has a small banner reading “LIBERTY” draped diagonally across its vertical and horizontal bars. Liberty is clad in flowing robes. Thirteen six-pointed stars arc around Liberty on the upper half of the coin, seven on the left and six on the right. The date 1864 appears in the exergue.

On the reverse, a defiant eagle clutching arrows in its left claw and an olive branch in its right. The inscriptions UNITED STATES OF AMERICA and the denomination (abbreviated as “QUAR. DOL.”) surround the eagle. The “S” mint mark appears beneath the eagle. A banner bearing the motto IN GOD WE TRUST was added above the eagle in 1866.

A denticled border encircles both reverse and obverse designs.

The edge of the 1864-S No Motto Seated Liberty quarter is reeded.