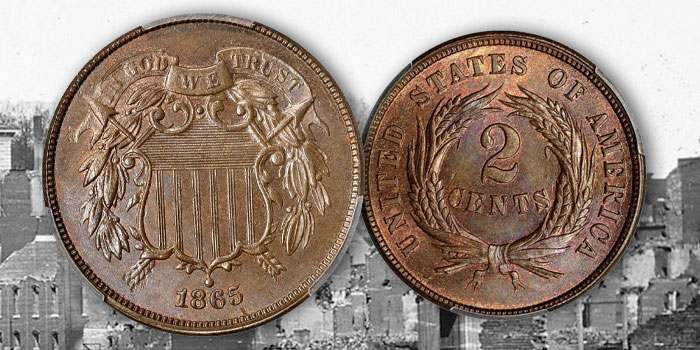 First struck in 1864 in an attempt to solve the nationwide coin shortage, caused by the onset of the U.S. Civil War, the Two Cent piece never truly caught on and suffered from a consistently shrinking mintage. As only the second issuance, the 1865 type still had a significant mintage of 13,640,000 specimens (for comparison’s sake, the Mint would strike only 3,177,000 coins in 1866, a 77% decrease). As such, the 1865 is the second-most-common date after the 1864 Large Motto type. The years of high mintages ended with the conclusion of pitched battle and the slow release of hoarded coins, a process that gradually negated the need for this odd denomination.

The major innovation resulting from this denomination was the use of the motto “In God We Trust”. So popular was this new addition that Congress passed legislation on March 3, 1865 to mandate its placement on all coins large enough to contain it. Implemented in 1866, this included all gold coins as well as the silver dollar, half-dollar coin, and quarter, as well as the three-cent nickel. Later, in the Coinage Act of February 12, 1873, Congress ordered the motto be “inscribed on such coins as shall admit” it.

Adding interest to this date for type collectors is the large number of die-punch varieties, the two most famous of which are the Plain 5 and the Fancy 5. The Plain 5 displays a normal crossbar on the five in 1865, while the Fancy 5 has a distinctly curved or flipped arm. While PCGS did not denote this until recently, they have now begun offering the designation. Since then, the combined population of PCGS and NGC Fancy 5 1865 Two Cent coins totals only 427 pieces, of which 44 total are designated as Red (RD) (the rest being either Brown (B) or Red Brown (RB)). Interestingly, NGC only records one Fancy 5 1865 RD example, graded MS 66.

Like all copper coins, the 1865 Two Cent piece’s value is heavily dependent on its color designation. As a result, if a collector is not particular about having an RD-designated coin, then it’s relatively easy to find a BN or RB example in up to low Mint State grade. In About Uncirculated grades, BN coins can fetch $85 to $100. There are, however, no RB coins graded lower than MS 62. In this grade, they sell for roughly two times the AU BN examples.

RD examples are relatively easily available in grades up to MS 65. However, the total combined population of all RD examples in MS 66, graded by both NGC and PCGS, consists of only 71 coins. Meanwhile, only five MS 67s are are reported at NGC and PCGS in both the Plain 5 and Fancy 5 varieties, making it a true condition rarity.

Collectors should be aware that while the Fancy 5 variety is slightly rarer than the Plain 5, it does not hold a significant premium. One MS 67 Fancy 5 example, sold by Heritage Auctions in their January 9, 2014, sale, hammered for $25,850 USD. Despite being one of the first pieces to earn the Fancy 5 designation from PCGS, this coin proved to be an outlier. It displays the soft orange of a true red copper coin and is simply dripping with luster. Similarly nice examples that were graded MS 66+ earn less than half of the astronomical auction record. Instead, a MS 66+ RD Fancy 5 with an extremely sharp strike and smooth satin copper luster hammered for $10,200 in 2020. A coin with the same grade was sold in 2021 for $8,225; this coin, however, has a significant reverse die crack and die cud.

As one of the few American coin series not to feature a bust on the obverse, United States Mint Chief Engraver James B. Longacre decided to use his own interpretation of the Great Seal of the United States as the main device. By focusing on the defensive shield with six vertical and 20 horizontal bars, the shield strikes a markedly different tone. The shield stands in front of a pair of crossed arrows, which, while martial in nature, actually represent alliance and friendship for many Native American cultures. Behind the arrows is the traditional symbol of victory, a laurel leaf. The date 1865 is placed in the empty field below the shield. Lastly, surmounting the entire design is a flowing banner with the motto “In God We Trust”. Taken cumulatively, the obverse is a visual display of the Federal Government’s drive to maintain the Union as the Civil War raged.

Centered on the reverse is an ornate wheat wreath, the arms of which encircle the denomination 2 CENTS written in two rows. The country name UNITED STATES OF AMERICA wraps around the reverse, covering more than three-quarters of the empty fields outside of the wheat wreath. Lastly, since the Philadelphia Mint was responsible for striking all Two Cent pieces, the design does not include a mintmark.

The edge of the 1865 Two Cent piece is smooth or plain.

James Barton Longacre (1794-1869) was one of the most famous US engraver and medallic artists of the 19th century. Longacre was appointed the fourth Chief Engraver of the United States Mint by President John Tyler after Christian Gobrecht died in 1844. Before his appointment, Longacre worked for the Philadelphia engraving company Murray, Draper, Fairman & Co. until he began working for himself in 1819. As an independent engraver, Longacre produced a series of famous plates that featured the Founding Fathers, President Andrew Jackson, and Senator John C. Calhoun. Once he became Chief Engraver at the Mint, he produced such famous pieces as the Flying Eagle cent, the Indian Head cent, the Shield nickel, and the Coronet Head $20 double eagle gold coin.