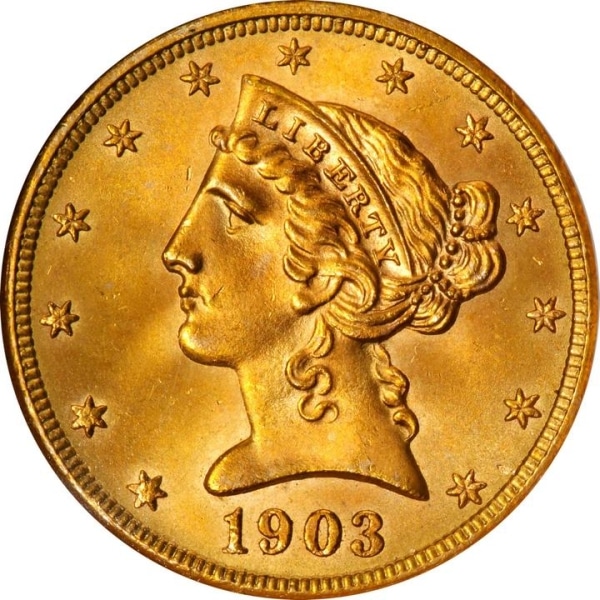 Despite spending the entirety of May, June, and July of 1903 striking coins exclusively for the Philippines, the San Francisco Mint was also able to produce a very large issuance of Liberty Head half eagles in 1903. In fact, the branch mint issued that year what would be the sixth-largest mintage of the entire series. At over 1.85 million pieces, this was not only the last issuance in the series of over one million but also the largest since 1901, when San Francisco struck 3.648 million pieces. Furthermore, between 1902 and 1929 (when the denomination was canceled for good), only the 1909-D Indian Head had a larger mintage.

Throughout the fiscal year ending in June of 1903, the San Francisco Mint received 35 dies from the Engraver’s Department while the Philadelphia Mint received only 14. The following fiscal year, the two mints received 24 and 12 dies, respectively. If all of the dies were used for the entirety of their useful life, then the San Francisco Mint was at least twice as efficient in 1903 than its Philadelphia counterpart.

Today, these coins are quite common up through mid-Mint State. With such a large mintage, there is more than enough supply to ensure that most examples are worth only a small premium over melt. If a collector were to go to their local coin store tomorrow to purchase a mid-grade example of the 1903-S half eagle, they would most likely need to pay between $450 and $475, since the melt value of the gold is standing at around $430 when this article was written. Due to the general availability of this type, auction records mainly represent examples in MS grades. After this, the numismatic value of the coin begins to outweigh the bullion value, and MS 62 to MS 63 examples have been selling for upwards of $700 to $750.

Still quite common, with a combined population of 1,752 pieces, coins in MS 64 are selling for around $1,000 at the time of original publication.

It isn’t until MS 66 that this type becomes a conditional rarity, a status that is reflected in the price. With only 88 graded and certified examples at PCGS and NGC together, these coins have sold for as much as $8,400. More commonly, MS 66s sell for between $3,000 and $4,000 at auction.

Top population examples (MS 67s) have been known to sell for between $10,000 and $15,000. While the official graded population of NGC and PCGS stands at a combined 14 pieces, this undoubtedly includes a number of resubmissions. That being said, due to the type’s sizable mintage, the actual population of such high-grade examples could be larger. There may even be an MS 67+ or an MS 68 out there waiting to be found. Whether or not this discovery would lead to a decrease in prices on lower grades, or simply a new record price, is hard to say.

Redesigned in 1839, the main differences between the new Liberty Head design by Christian Gobrecht and the Classic Head half eagle by William Kneass can be seen on the obverse. Gobrecht retained the 13 six-pointed stars ringing the obverse field, representing the 13 original US states. The date (1903) remained at the bottom, and the whole design was ringed by a denticled edge. However, the Liberty Head’s Lady Liberty was made slightly younger-looking. In this design, Liberty’s hair is styled up in a bun that is kept in place by a thin beaded thread. Her bangs curl to the back, with several locks of hair hanging down her neck. Additionally, Liberty’s tiara was made slightly more pronounced towards the front.

The reverse design was changed in only one place, the denomination. Previously labeled “5 D.”, the denomination was now spelled out as “FIVE D.”. The heraldic eagle, with its customary arrows and olive branches, remained central to the reverse design. The shield decorated with 12 vertical bars and seven horizontal stripes is placed directly in front of the eagles’ chest feathers. The eagles’ wings interrupt the legend, UNITED STATES OF AMERICA, and almost touch the denticled border. The denomination, at the bottom of the design, is separated from the legend by two centering dots. Struck at the San Francisco Mint, this coin bears the “S” mintmark between the eagle’s claws and the denomination. Interestingly, the Liberty Head half eagle is the only United States gold coin struck at seven different branch mints.

The edge of the 1903-S Liberty Head half eagle is reeded.

Born in 1785, Christian Gobrecht began working for the United States Mint in 1823 and became the Mint’s third Chief Engraver in 1840. He served in that position until he died in 1844. Gobrect designed the Flying Eagle cent (1857-1858), the Seated Liberty type, and the Liberty Head quarter eagle gold coin (1840-1907). A tinkerer, he also invented a medal-ruling machine, created his own musical instruments, and developed a camera lucida, which projected images onto pieces of paper.