Intended to be a circulating commemorative coin honoring the bicentennial of the birth of America’s first president, the Washington quarter as originally designed was struck from 1932 to 1998 – save for a two-year run in 1975 and ’76, when the coin’s reverse was swapped out for the “drummer boy” design of Jack Ahr.

According to a contemporaneous report in the January 1932 issue of The Numismatist, 99 designs were submitted. Of those, five finalists were sent back to the artists for revision. A committee convened to review the revised designs and selected the designs of Laura Gardin Fraser. By law, the Secretary of the Treasury had final say, and despite the protests of the CFA and the Bicentennial Commission, Treasury Secretary Andrew Mellon chose the designs of John Flanagan. 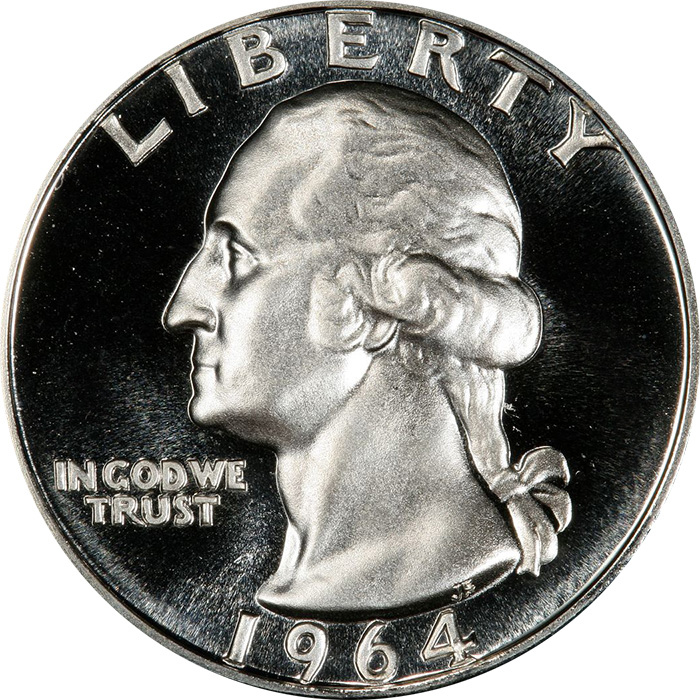 The End of an Era in American Numismatics

1964 marked the end of an era in United States coinage, and not just for Proof issues like the 1964 Washington quarter but for all silver coins struck for circulation.

The dime, quarter dollar and half dollar would all see their metal compositions changed, with only the half dollar retaining some semblance of precious metal – and then only through the end of the decade.

The Washington quarter and Roosevelt dime would be debased completely, with issues dated 1965 and beyond consisting of a sandwich metal composed of copper and nickel.

With 3,950,762 sets sold, the 1964 Proof Set established sales records and capped a decade-long trend of speculation and bulk buying. The United States Mint had sold three million sets in each of the three proceeding years, but popular sentiment regarding the new coin design made 1964 a banner year for set sales.

Speculators doubled down on organic demand, seeing the issue price of $2.10 as a low-cost-of-entry investment with huge potential upside.

The U.S. Mint, overwhelmed with demand for not only its Proof Sets–which took extra time and care to produce–but also its circulating coinage, would take a number of measures at the end of 1964 and the beginning of ’65 to reaffirm its mission to produce coins for the economy, and not for the pleasure of numismatists and speculators.

The Mint’s behavior was boorish and heavy-handed. While some in Congress saw coin collectors as hoarders who had become a threat to the economy, the Mint saw them as particularly irksome and initiated a number of draconian measures intended to chill demand for modern coin issues. The use of mintmarks was discontinued. A new date freeze was instituted. Commerce was flooded with billions of new clad coins while the nation’s silver coinage was rapidly drained from circulation.

An olive branch, the loathed Prooflike “Special Mint Set“, was offered in 1965, ’66, and ’67. These sets, which sold for twice the price of the 1964 Proof Set, today trade for about $8.00. Collectors saw very little “special” about them, and after strong advocacy by the American Numismatic Association (ANA) and the leading numismatists of the period, the Mint resumed its Proof program in 1968, charging $5.00 per set.

The steadily increasing premiums charged for U.S. Mint products would continue to cause major discord within the secondary market of the collecting hobby.

The 1964 Washington Quarter Proof in Specific

Public sentiment following Kennedy’s assassination and the Treasury’s quick adoption of a new coin to memorialize him undoubtedly contributed in large part to the record sales of the 1964 set. Anecdotes from dealers active at the time point to the timing of the Kennedy design and widespread hoarding of the issue as being the death knell to the half dollar’s utility as a circulating coin. But a more likely cause was Congress’s decision to only partially debase the denomination. A decision it reversed after a collector-only issue in 1970. By 1971, the American public was more or less content with not using coins in denominations larger than a quarter.

The 1964 sets, despite the high mintage, were produced to exacting standards for quality. Most sets are comprised of brilliant Proof issues, but the availability of Cameos and Deep or Ultra Cameos for this issue is among the highest for the 90% silver sets.

While the Mint would develop methods of applying Cameo frost to coins in the late 1960s (perfecting said methods in 1978), Proof coins struck in 1964 are encountered in Cameo or Deep/Ultra Cameo with relative infrequency. However, comparatively, ’63 and ’64 yielded far more of these frosted coins than any other year during the 1950-1964 run.

NGC reports 12,795 grading events of the 1964 Washington quarter in Proof. 8.78% of this total earned the Cameo designation, while a paltry 3.1% earned Ultra Cameo. The typical grade for a submitted coin was in the Proof 67 to Proof 68 range, with a sizable population in Proof 69. Assume that coins submitted for grading were handpicked for quality. On average, a fresh Proof set that was well cared for will yield a quarter in this grade range. Expect worse if the coin was mishandled, the set’s packaging is brittle or damaged, or the coin was removed and put into a Capital holder.

PCGS has graded 6,968 1964 Washington quarters in Proof. From that pool, PCGS has attributed their Deep Cameo designation to 6.7% of coins submitted, while 13.6% earned the company’s Cameo attribution. PCGS’ grade distribution mirrors that of NGC.

That one service’s Cameo and Deep/Ultra Cameo designation is higher than the other’s, given the relative population size, is interesting but not conclusive. Our assumption is that more coins were submitted in bulk to NGC, regardless of the presence or absence of frost.

The numismatic premium for a well-preserved Washington quarter is worth approximately two times melt, or $6.00.

Coin certification by PCGS or NGC can add significant numismatic value to the coin, especially if the coin exhibits thick cameo frosting and has virtually flawless fields and devices. PCGS has certified 36 Brilliant 1964 Washington quarters as Proof 70, but to date, no Cameo or Deep Cameo has earned higher than Proof 69. A PCGS Proof 70 with great eye appeal will trade for about $300; however, a badly spotted example in an old PCGS holder sold at Heritage in 2017 for $119.

Brilliant examples in 69 routinely trade for $30. In Cameo, a 1964 Washington quarter in Proof sells between $50 to $75. The dividing line between Cameo and Deep/Ultra Cameo can be arbitrary. A superior Cameo may very well exceed the eye appeal of a run-of-the-mill Deep Cameo, making a stretch buy of $75 to $100 for a PQ Cameo a logical play for the specialist collector.

In Deep/Ultra Cameo, in 69, expect to pay between $200 and $300… more if the coin is truly remarkable. Not all Deep/Ultra Cameo coins are created the same; some have just enough frost to earn the designation, while others come blanketed in six feet of frost. That latter, exponentially rarer coin, should bring substantially more than prevailing rates of sight-unseen coins in the same grade.