Even the most available pre-1933 United States gold coin has some degree of “rarity”. A coin like a 1924 or 1927 Saint-Gaudens double eagle might have a total population in the 10,000s and this certainly does not mean it is rare but in comparison to, say, a modern coin, it does have a degree of scarcity. But when we are discussing the sort of coins that DWN buys and sells, we are generally talking about true numismatic rarity. There are a number of different degrees of rarity. The Sheldon Rarity scale, as an example, attempts to distinguish the rarity of copper coins (specifically early Large Cents) from “common” (R-1 or more than 1500 known) to R-8 (two or three known).

I think there are two interesting and important fundamental concepts of rarity that the gold coin collector needs to understand. These are overall rarity (or what I sometimes refer to as “fundamental” rarity) and grade rarity. Let’s take a look at both concepts with some specific examples that help to explain them.

In my opinion, a coin that is fundamentally rare is superior to a grade rarity. An example of a fundamental rarity is an 1864 quarter eagle. Only 2,824 business strikes were made and probably no more than three dozen pieces are known in all grades. This means that, even in low grades, the 1864 quarter eagle is a rare coin. By the same token, a very high-grade example of this date is rare as well. Thus, a fundamentally rare coin in a high grade is especially desirable.

An example of a grade rarity would be an 1854 Three Dollar gold piece in MS 67 or 68. This is a very common issue in all grades up to and including MS65 and it is rare in MS67 and unique in MS-68, solely as a result of its grade. While I think a coin like this is very interesting (and it is certainly desirable to a type collector specializing in great, high-grade coins) as a collector I would rather own a coin that is rare and desirable in all grades; just not in “super-grades.”

A few coins are very unusual in that they combine overall and grade rarity simultaneously. Getting back to the 1864 quarter eagle I mentioned above, a perfect example of this is the Byron Reed 1864 quarter eagle graded MS67 by NGC. Not only is this among the finest pre-1890 business strike quarter eagles of any date that I’ve seen, but its also one of the rarest collectible dates. There aren’t many coins that combine these two elements in one neat package but those that do are amongst the creme de la creme of American numismatics.

Is one type of rarity “better” than the other? That’s hard to say and, of course, it depends on who you talk to. If you listen to a dealer that specializes in Gem coins, he’ll tell you to steer clear of “lowly” coins like an 1847-C quarter eagle in Extremely Fine. Other dealers will tell you to avoid the same date in a super-grade for that issue (in this case, an MS64).

The correct answer often depends on the state of the market. When coins are doing very well, something like an 1854 Three Dollar gold piece in MS67 may show exceptional performance and may even double in price in a short period of time. But this is also the exact sort of coin that traditionally drops like a stone in water when the market gets cold. Coins that are fundamentally rare, like the 1864 quarter eagle I mentioned above, seem to show more consistent valuation. If the market for rare gold were to crash tomorrow, I’m sure that this issue would drop in value but it would remain far more liquid than something like a 1903 quarter eagle in MS68. Most 19th century U.S. gold coins show a progression of rarity. Take, for instance, a typical Dahlonega half eagle. Let’s say that the original mintage figure is 50,000 pieces. Given the typical survival rate for this denomination, we can assume that maybe 300-400 exist in all grades. This makes our hypothetical half eagle at least marginally scarce in all grades. Of the 300-400 that exist, at least three-quarters of them grade Extremely Fine or lower. There may be as many as 50 or 60 that grade About Uncirculated but most are in the AU50 to AU53 range. So, we can see that this date is relatively scarce in the lower AU grades and probably rare in the upper range; especially with original color and surfaces. In Uncirculated, there are probably around 10 or so known. Our D mint half eagle thus is very rare in Uncirculated. And this progression continues through Mint State with the “cut off” point for extreme rarity tending to be around MS62 to MS63.

What this ultimately means is that this date progresses from being scarce in EF40 to rare in AU55, to very rare in MS62 to excessively rare (or even unknown) in MS64. The only factor that might change this progression, of course, is the discovery of a hoard of high-grade pieces that skews the distribution. 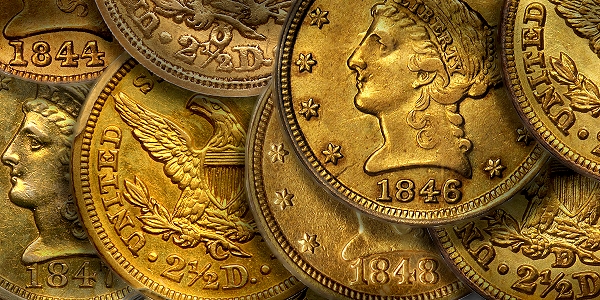 Many collectors ask me for advice when it comes to purchasing rare gold coins. One thing that I really stress is avoiding common coins in uncommon grades. Let me give you an example of this.

An 1881 eagle is a common coin in grades up to and including MS63. In this grade, PCGS has recorded 878 examples, and we’re looking at $1,200 for a presentable example. In MS64, this date becomes scarcer with a current PCGS population of 74. This coin would cost you around $3,500; probably not a bad value although not a coin that I’d jump on. In MS65, there are just two PCGS MS65. If this coin became available, it would likely sell in excess of $19,000.

Here’s why I think this coin is not a great value for most collectors. This coin is readily available in MS63 and there are not enough specialists in this series demanding the highest possible grade. The MS64 might make some sense to these collectors, but unless there are two “must have the best graded at PCGS” collectors competing at the same time, this coin seems to me to be the sort of coin that I think cool piece, but what exactly am I going to do with it? if and when it is offered for sale to me.

I’d like to hear your comments on rarity. Please either add to the comments section below or email me directly at [email protected].