The loss of SS Central America in September 1857 had a major impact on the history of the United States. Although a recession had already started in 1856, and a major insurance company failed in August, the loss of this ship caused upheaval in financial markets and exacerbated what became known as the “Panic of 1857”. 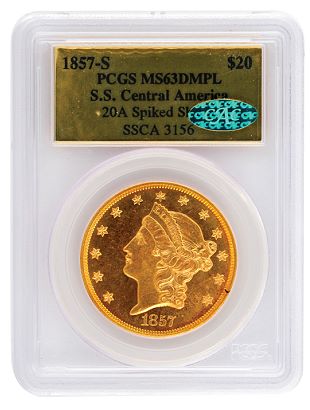 The Library of Congress website reveals that Central America “had aboard 581 persons, many carrying great personal wealth, and more than $1 million in commercial gold. [This ship] also bore a secret shipment of 15 tons of federal gold, valued at $20 per ounce, intended for the Eastern banks”.

In this context, the Library of Congress website cites several pertinent, recognized 19th-century books and other contemporary sources. “As banking institutions of the day dealt in specie (gold and silver coins instead of paper money) the loss of some thirty thousand pounds of gold reverberated through the financial community.”

In October, many banks suffered terribly or failed altogether. There were ‘runs’ on many banks by depositors.

The crisis reached its worse point on October 14, about a month after the sinking of Central America, which was “Suspension Day, when banking was suspended in New York and throughout New England.” The U.S. economy did not fully recover for years.

The shipwreck site was discovered about 130 years later.

In the wreckage of Central America, there were thousands of 1857-S Double Eagles ($20 gold coins), which were very scarce before salvage efforts began. Of all the Double Eagles found in the wreckage, however, only 50 were designated as being Prooflike (PL), and only seven as Deep Mirror Prooflike (DMPL), by Professional Coin Grading Service (PCGS). In late 1999 and/or early 2000, PCGS certified and graded most of the coins found in this shipwreck. As far as I know, these 57 PCGS-certified 1857-S Double Eagles and one NGC-certified 1858-S Double Eagle are the only reliably certified Prooflike gold coins from the early years of the San Francisco Mint, which began formally striking coins in 1854.

The Rarity of Type One Prooflike Double Eagles

The 1857-S Double Eagles that PCGS has designated as Prooflike are unusual in that it is the general policy of Professional Coin Grading Service to not designate gold coins as being ‘Prooflike’. In a December 2000 Christie’s auction, it is stated that a PCGS-certified ‘MS-65 PL’ 1857-S is “Tied with two others for finest of 50 PL examples from the S.S. Central America treasure certified by PCGS.” According to the Christie’s cataloguer, who is an expert regarding the histories of coins found on shipwrecks, 19 1857-S Double Eagles are (or were at the time) PCGS-certified as ‘MS-64 PL’.

— As far as I know, these 57 are the only gold coins, of any type, that PCGS has designated as Prooflike.

— These are the only surviving PL 1857-S Double Eagles from any source.

Branch Mint Type One and Type Two (1866-76) Double Eagles tend to be more popular than corresponding Philadelphia Mint Double Eagles. New Orleans Mint coins are reminders of a culture and society that was much different from societies in Baltimore, Philadelphia, New York or Boston.

San Francisco Mint and Carson City Mint Double Eagles are relics of the ‘Wild West’! Many collectors regard these as being more exciting than Philadelphia Mint products, though I do not share this view. Certainly, during the period from 1850 to 1876, the West was not a fully explored region and life for many Westerners was characterized by adventures. By the standards of citizens in the Northeastern U.S., life in California was risky, grungy and tough. People living on the East Coast at the time tended to have typical jobs and their respective lives were usually governed by routines. As the Carson City, Nevada Mint did not begin operations until 1870, the only Type One Double Eagles of the West are those that were struck in San Francisco.

The Concept of Prooflike

Before discussing the term ‘Prooflike,’ the terms ‘Proof’ and business strike must be mentioned. Most coins are business strikes, which were made as part of the routine operations of a Mint. Usually, business strikes are intended for circulation, though this is not always true. 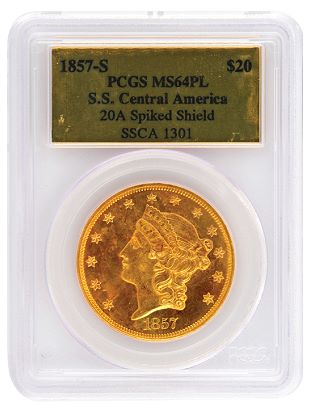 There is more than one category of coins that are specially made to look more appealing than, or just very different from, business strikes. Several criteria must be met for a coin to be a Proof.

The relationships of the devices (raised design elements) and the fields (relatively flat areas) are different on Proofs than on business strikes. It suffices here to say that a Proof will meet several criteria, including evidence of double-striking and greater design detail than found on a business strike or even on a Prooflike business strike.

For 19th-century silver or gold coins, a Brilliant Proof must have been struck more than once. It will usually have very deep and very complete mirror surfaces, though such surfaces are not required for a coin to be a Proof.

To be Proof-like, a business strike must have the one characteristic of Proofs that most collectors associate with Proofs: fields that are mirrored. Even if a coin had the same mirrors as would be found on a Proof of the same type, however, it would not be a Proof unless it possesses a combination of other characteristics of Proofs. No matter how deep, how thick, or how complete, the presence of mirrored fields does not demonstrate that a coin is a Proof. Often, however, it means that a coin is Prooflike. Only a very small percentage of all business strikes qualify; for some coin types, few, if any, Prooflike coins are known.

How is a Prooflike (but not Proof) coin made? The dies are heavily polished, perhaps more so than is typical. If the dies are new or relatively new, a stronger impression may be made into the planchet, which is a specially prepared blank disk. Prooflike coins, however, may be minted with worn dies.

Each coin is minted with two dies, an obverse die and a reverse die. Each die is somewhat cylindrical in shape and has the design of one side of a coin sunk into its face. One die is underneath the planchet and the other die is slammed hard, with much force, on top of the planchet, which was heated prior to striking. The design elements (devices) of the coin are imparted from the dies onto the planchet to make a coin.

Dies are polished before these are employed, and, usually, dies are also polished at various times during their respective lifetimes. Depending on the polishing technique used, the extent of the polishing and the kinds of liquid applied to the dies, coins struck from recently polished dies will have varying degrees of reflective surfaces. Even in the 1790s, coins struck from recently polished dies became characterized by mirror surfaces. Many 1796 quarters and quite a few 1795 Half Eagles ($5 gold coins) are Prooflike or Semi-Prooflike. The terms Prooflike, Semi-Prooflike, and Deep Mirror Prooflike refer to the extent and depth of the mirrored surfaces on a non-Proof coin.

Some Prooflike coins were made intentionally so; most Prooflike coins are simply strikings from dies that were recently polished or from dies that had not been used to strike many coins since they were last polished. Sometimes, Prooflike coins have additional characteristics of Proofs, such as frosted devices that contrast with the mirrored fields. My guess is that, sometimes, U.S. Mint personnel excessively polished and otherwise enhanced dies because they were bored. A job that involves working on making coins all day long was not extremely interesting and may have dulled the minds of many workers. Certainly, some Mint personnel sought ways to add zest to their days. They may have enjoyed using their skills to polish dies to a greater extent than was really necessary and they must have enjoyed seeing the brightly mirrored coins that were sometimes produced as a result of extensive polishing of dies.

Whether Prooflike coins were made intentionally or by routine procedure is beside the point. These are exceptional coins, different from ordinary business strikes. If a markedly Prooflike coin, especially a DMPL coin, is placed side-by-side with an ordinary coin of the same type, the difference in appearance is often astonishing. Mirrored fields are frequently too cool to describe and really cannot be fairly represented in photographs.

Besides these few 1857-S Double Eagles from Central America and innumerable Prooflike Morgan silver dollars, I am not aware of PCGS designating any other 19th-century coins as being Prooflike. NGC, however, has so designated numerous silver coins of various types and a substantial number of Prooflike coins of several gold denominations.

Many Morgan Dollars are examples of business strikes that were not made for circulation. For political reasons (partly due to the influence of the silver mining industry), millions more Morgan dollars were minted than could possibly have been utilized in commerce. Indeed, there was no intention of releasing most of them into circulation. These were bagged and stored by the U.S. Government. Many were eventually melted.

There are many thousands of Prooflike and DMPL Morgans. These have been avidly collected over the past 30 years. For some dates, PL or DMPL Morgans are relatively common. For other dates in the Morgan series, PL and especially DMPL coins are very rare.

Clearly, many collectors regard Prooflike coins as being very special.

More than 90% of coin collectors have seen PL Morgans. Though often stunning, these are not mysterious or rare in general. Further, real Proof Morgans are not nearly as valuable as real Proof Double Eagles. Plus, while Prooflike Morgans have been openly collected and marketed for decades, there is something mysterious about Prooflike gold coins. There are countless, 19th-century Prooflike Morgans of all dates combined and there are very few Prooflike Double Eagles, of all dates, from the 19th century.

Research for this article was supported by Legacy Rare Coins of Carson City, Nevada, and this firm provided images of Prooflike 1857-S Double Eagles.