On September 29, 2022, the first part of four sales featuring the Harry Bass Core Collection was sold at a live (!) auction held in Long Beach, California by Heritage Auctions. The sale was small with 106 total coins sold; of these, just 71 were regular-issue U.S. gold coins. The sale brought over $20 million USD, which averages to around $196,000+ per lot.

This was an interesting test for the coin market as the economy seems headed towards, if it’s not already in, a recession. Plus, this sale occurred only a few weeks after the ANA auctions, which poured over $200 million worth of U.S. coins into a market already saturated with available material. How would these coins fare? Would Bass I be the 2022 equivalent of the May 2020 Pogue V sale, a billionaire’s bargain basement of unappreciated six-figure rarities?

The sale wound up being extremely strong, with an across-the-board enthusiasm that surprised me. The overall tally was at least 30% to 40% over pre-sale estimates, with a host of all-time price records set.

Let’s look at six US gold coins in Bass I that I liked and analyze the results (note: All prices related to the Bass sale include the 20% buyer’s premium unless otherwise stated). You can’t get much rarer or numismatically significant than this: an issue that is not only unique for the date but for the type.

This is the sole Proof Type One gold dollar known, and it first surfaced in 1975 but wasn’t sold at auction until 1985 when Harry Bass acquired it for $68,750 in Stack’s session of Auction ’85.

Clearly, this coin was going to set a price record for any Proof dollar. If it had been a larger coin, then it would have easily eclipsed the $1 million mark. It still brought $690,000, and it is now part of the single finest type set of U.S. Proof coinage ever assembled.

I thought this coin was a bit aggressively graded but it was very nice and obviously a real Proof. The final price realized was strong, but given this coin’s extreme rarity, I don’t think the price was unjustified. 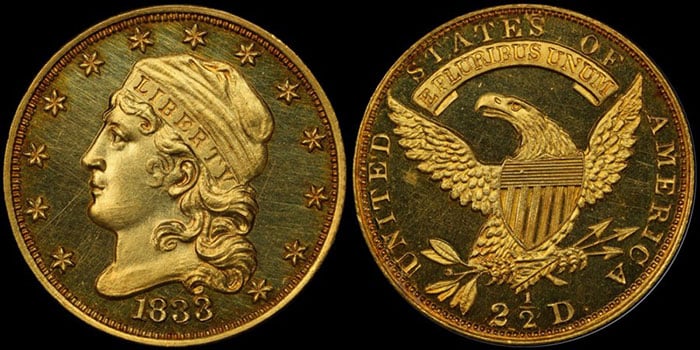 David Akers estimated that “five or six” Proof 1833 quarter eagles are known but I think this range is overstated. I am aware of just three: this coin (bought privately in March 1978 from Stanley Kesselman), the superb NGC PR67 that brought $50,600 as Eliasberg: 99 all the way back in 1982, and a coin in the National Numismatic Collection at the Smithsonian.

From a quality standpoint, I was slightly underwhelmed by this coin as it has been aggressively cleaned many years ago; the upper left obverse, in particular, was densely hairlined. Nevertheless, the coin still had a nice naked-eye appearance, and if you were a type collector who needed a Reduced Size Capped Head Left quarter eagle for your set, then you weren’t likely to find a better coin at less than $500,000.

The coin sold for $408,000, which I view as a strong but sensible price. The most recent comparable auction record was an NGC PR63 Cameo with fewer hairlines but more post-strike marks that brought $168,000 in April 2021; a price that seems downright cheap by Bass I standards. I had coveted these two remarkable coins for years, both easily the finest known for their respective issues. Discounting the unique 1870-S, the number of Three Dollar gold pieces made at the San Francisco Mint is just four, and the 1855-S and the 1860-S are the two rarest in high grades by a sizable margin. Both coins were properly graded in my opinion, and both had wonderful overall freshness and eye appeal. 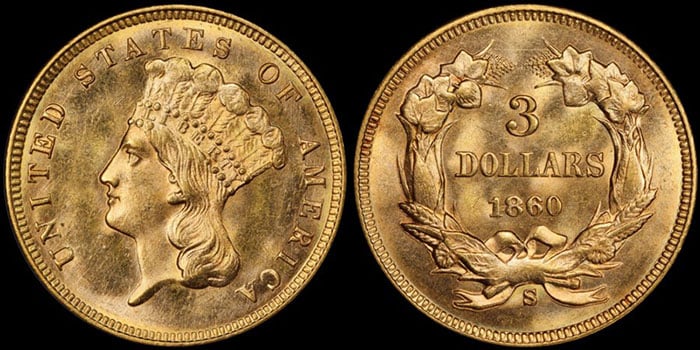 The 1860-S was last available to collectors in the October 1982 Eliasberg sale, where it sold for $20,900, and it had remained in the Bass Collection for 40 years. It blows away any other 1860-S Three. I am aware of no more than four to six Uncirculated coins in total, with all the others in the Slider++ to MS61 range. I assumed this would bring a strong price but I wasn’t prepared for the record-smashing $360,000 that it ultimately realized. In my opinion, this was an exceptionally strong price. 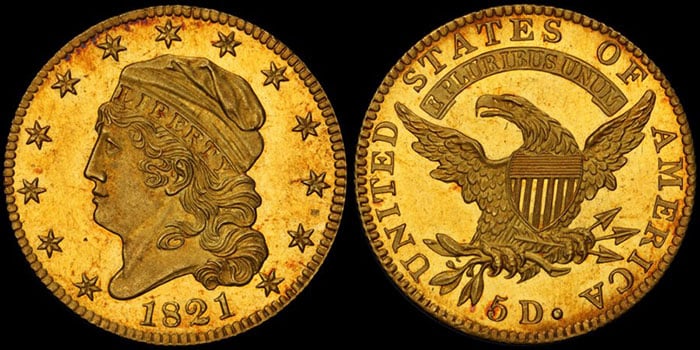 As a business strike, the 1821 half eagle is very rare, with around 15 coins known. The Bass Proof is even rarer, with just two known in this format and the other one is impounded in the National Numismatic Collection at the Smithsonian. This was the clear highlight of the Bass I sale and it was a coin that was to become the object of one of the all-time great Numismatic Auction Dogfights.

The coin opened very cheaply at $862,500 and quickly shot up past one million to two million, and then to three million – at which point there were still four active bidders. The final price realized was $3,850,000 hammer, or $4,620,000 with all fees included

A quick note: While I am generally underwhelmed by the antics of Heritage’s lead numismatic auctioneer, major kudos to him for perfectly orchestrating the nine-minute-plus bidding ballet that marked the sale of the 1821 half eagle. It should be required viewing in Auctioneer School. By the benefit of its “plus” grade, this 1801 was the single-finest example of the date currently graded at PCGS. I liked the coin but couldn’t get to MS65 (let alone MS65+) due to a profusion of shallow ticks in the upper right obverse field. To be fair, I should point out that I’ve never seen a Gem 1801 $10 despite the sale of three coins so graded (two PCGS examples and an NGC piece) in the last decade. In fact, the nicest I’ve seen is the PCGS/CAC MS64+ Simpson/Pogue/Stickney coin, which brought $432,000 in January 2022.

To me, this was a fairly weak price but it made an important statement. On an important six-figure coin like this, buyers generally require the added protection of CAC endorsement. It will be interesting to see if this coin ever reappears in the market as an MS64+ or even an MS65 but with CAC approval at the lower grade. The U.S. Mint optimistically coined 59 Proof double eagles in 1860 but it is probable that a number went unsold and were later melted. Today, just seven are accounted for, with two of these impounded in museums. While the Bass coin wasn’t the highest-graded Proof of this date (NGC has graded one in PR66 CAM), it was the finest Proof 1860 $20 I’ve ever seen and among the best Proof Type One double eagles of any date I can recall.

The coin opened at $537,500 and two bidders slugged it out until the million-dollar mark was directly hit. With the 20% premium, the final price was $1.2 million; this is by far a record for the date and it is the second-highest price at auction for any Proof Liberty Head double eagle trailing the $1.8 million record set by the PCGS PR66DCAM 1861 from the Simpson Collection that sold in January 2022.

Overall, I would rate the Bass I sale as a rousing success for both the Harry Bass Foundation and for Heritage, who should be commended for producing a stellar catalog and a smooth sale on very short notice.

There will be three more Bass Core Collection sales, all held in 2023. The first will be at the January Winter FUN show. The second will occur at the April Central States show. The last one will be a major attraction at the August ANA World’s Fair of Money. For more information, you should contact the auction company.