I’ve been selling a collection for an old friend and collector who purchased a 1921 Morgan silver dollar from a major coin auction in 1981 that was cataloged as a Zerbe Proof as follows: In the 1977 Matthew Bryan Collection Sale, by NASCA, the coin was described this way:

“1921. Morgan. Prooflike Unc. MS-60+. (Photo) First strike from new dies which were polished to make the Zerbe Proofs.  Bevelled [sic] edges, no “knife rims.”  Unobstrusive [sic] light hairlines.  An excellent sharp strike with far better hair detail above Liberty’s ear and feathers of eagle’s breast than you will see on other Uncirculated Morgan Dollars.  Undoubtedly one of the 50 pieces especially struck to mollify Henry Chapman, the old-time Philadelphia coin dealer, who was reportedly much chagrined by the “favored treatment” he alleged was given Farran Zerbe by U.S. Mint.”

Subsequently, the purchaser in the Kagin’s sale had the silver dollar graded by the PCI grading service, back when all the slabbing services were relatively new.  Its holder was labeled, “1921 $1 Struck from PR Dies MS 63 Ex: Kagin’s 323rd Sale Lot #62 Mintage: Unknown.” I mentioned this coin to another friend and collector, from the Pacific Northwest, who’s a persistent researcher and who became interested in this coin and its story.  He collaborated with me on the research for this article, and actually bought the coin.   In doing so, he made a generous donation to the charity to which the proceeds have been given from the aforementioned collection I’ve been selling.

First, there are two types of 1921 Morgan silver dollars that are commonly known as proof strikings that were not regular issues of the United States Mint, even though they were struck by the U.S. Mint.  These are commonly known as “Chapman Proofs” and “Zerbe Proofs.”  They’ve been known in the hobby for generations. On the other hand, many 1921 Morgan dollars known as “Zerbe Proofs,” are less definitive, looking more like well-struck “business strikes,” which are made for circulation, but are most often found with “proof-like” surfaces, rather than full mirror-like surfaces of typical Morgan dollar proofs.  Several high quality pieces have been recognized by PCGS and NGC as “Zerbe Proofs.”  However in recent years, PCGS has changed its designation of these Morgan dollars to “Zerbe Special Strikes.”

In looking at the labels of “Zerbe” dollars from major auctions, we have found them described by PCGS in at least three different ways, presumably as the understanding of these coins has evolved within the hobby.  An example of one PCGS label can be found as: “PCGS PR 66 Zerbe.”  We have also found another labeled as: “PCGS MS 65 Zerbe Special Strike.”  Note the distinction between the “Proof” and “Mint State” designations PCGS has given these different coins.  Finally, about a year ago, PCGS changed their labeling of them to: “PCGS SP 65+ Zerbe Special Strike,” with “SP” meaning “Special Strike.”

We have also found variations in the specific die diagnostics used to describe the Zerbe dollars by VAM die variety numbers, which is a classification system used to distinguish specific dies, and die combinations for obverse and reverse, that were used to strike Morgan and Peace silver dollars.  PCGS uses the variety of VAM 1-AG to designate the Zerbe dollars, while we have found another reference to the variety known as 1921-P VAM-47, which has been called the “official” die variety used by VAM specialists. 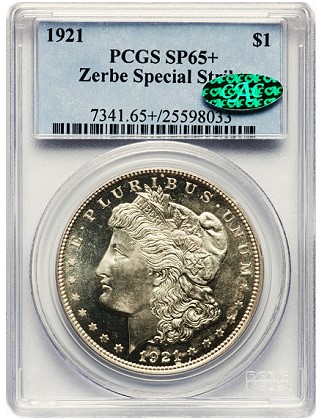 This reference, from “VAMworld,” the official website of the Society of Silver Dollar Collectors, regarding the later variety, states: “This recent declaration was not made to say that the VAM-47 is not the real Zerbe proof but that more research is needed.  Perhaps both dies were used.”

Needless to say, the Zerbe dollars are controversial, and confusion reigns.  The catalog description in the Matthew Bryan Collection Sale, quoted above, even confuses the Zerbe coins with the Chapman coins.  And, as explained below, there’s even confusion about whether the “Zerbe Proofs” were struck at the Philadelphia Mint or the San Francisco Mint, or both.

Farran Zerbe was President of the American Numismatic Association from 1908 to 1910.  The Association’s highest honor is named after him – the “Farran Zerbe Memorial Award,” which is given in recognition of numerous years of outstanding, dedicated service to numismatics.  In 1969 Farran Zerbe was posthumously inducted into the ANA Hall of Fame.  While ANA President, he purchased “The Numismatist,” the Association’s monthly publication, from the heirs of Dr. George F. Heath after Heath’s sudden death in 1908.  He then sold it to the Association in 1911. Zerbe founded the Pacific Coast Numismatic Society in 1915 and was appointed to oversee the 1915 Panama-Pacific International Exposition’s coin and medal department.  He was also instrumental in promoting and selling gold and silver commemorative coins from the 1893 Chicago World’s Fair, known as the “Columbian Exposition,” and the 1904 St. Louis World’s Fair, also known as the Louisiana Purchase Exposition.  After World War I Farran Zerbe proposed a general circulation commemorative coin that recognizes America’s influence in the peace process.  The proposed coin became the well-known “Peace Dollar.”

As the story goes…Farran Zerbe visited the San Francisco Mint in 1921 to see the strikings of the first Peace dollars from dies that were shipped from the Philadelphia Mint.  To his great disappointment, the dies turned out to be of the old Morgan dollar design.  Mint officials then assuaged his disappointment by striking several 1921 “S” mint Morgan silver dollars for him as presentation strikes, referred to as “Proofs.”  He gave many of them away to friends and at least five of these coins are believed to still exist, but they seldom surface.

Some experts of these coins believe that the story of these presentation coins, referred to as “Proofs,” that were struck in San Francisco from dies made at the Philadelphia Mint and bearing the “S” mintmark, have been confused with traditional “Proof” Morgan dollars that were customarily struck at the Philadelphia Mint.  Note that the U.S. Mint did not issue proof sets during 1921.

Some numismatists, who are deceased, have claimed that Farran Zerbe also purchased from 20 to 200 pieces from the Philadelphia Mint.  But it is doubted by many knowledgeable numismatists that the silver dollars, long known as the “Zerbe Proofs,” exhibit true proof details, like the 16 coins mentioned above, known as “Chapman Proofs.”  Some experts even believe the true “Zerbe Proofs” should carry the “S” mintmark, for the reason previously stated.

Author, Q. David Bowers, in his book Silver Dollars & Trade Dollars of the United States, remarks: “In my opinion, true Proofs with deep mirror surfaces are exceedingly rare.  The situation is obfuscated, however, by a profusion of prooflike coins from hairlined dies sold as “Zerbe Proofs,” or with other nomenclature.  Walter H. Breen and I differ in our opinions in this area; he considers more coins to be Proofs than do I.  As related under 1921-S below, “Zerbe Proofs” are supposed to have S mintmarks!  However, Breen recalls a conversation he had with Wayte Raymond in1951, who told him that Zerbe had Proof 1921 Morgan dollars (of this hairlined finish style) made at the Philadelphia Mint to accompany the 1921-S “Proofs” he already owned.”

Bowers adds, “Mike Carter in his monograph, The 1921 Morgan Dollars: an in-depth study, commented as follows: ‘We must keep in mind that these coins are not Proofs in the real sense of the term, but presentation strikes.’  This statement tells it all, and should be underlined by users of this book, who contemplate paying very high prices for such pieces.  In fact, I have underlined it for you.”

Some numismatists conjecture that rumors about the “Zerbe Proofs” have been exaggerated, leading to false beliefs in the numismatic community that Philadelphia struck “Zerbe Proof” coins really exist, when in fact they may not have been manufactured at all.  Greed, or false hope, is also believed by some to have caused many in the coin hobby to call some well-struck proof-like 1921 Morgan dollars “Zerbe Proofs.”  Bowers said it aptly, “Somehow, the creation of these 1921 San Francisco Mint “Proofs” got translated into the existence of Philadelphia Mint coins called “Zerbe Proofs” without any reason, so far as I know.”

The numismatic community may never know the real truth about these coins, because their complete history has been lost with the passing of Farran Zerbe and the Mint officials involved in their strikings.  However, caution is urged by most knowledgeable dealers and numismatic scholars when purchasing examples of these coins for big money.  Some of these Zerbe dollars have sold for tens of thousands of dollars, and of course, those buyers will defend their purchases.  At least some of them may be right!  Others, encapsulated in “slabs,” have been found on eBay for just $59.00!

So we ask…“When was the term “Zerbe Proof” first used in reference to 1921 silver dollars, both from the San Francisco Mint strikings and the Philadelphia Mint strikings?”  It’s quite plausible that a rumor, which has grown “legs,” has turned into a legend which collectors have put stock into.  Is it possible that a 1951 conversation “recalled” by Walter Breen, became a recognized “fact?”

Collectors should make sure that the coins they buy, which are referred to as “Zerbe Proofs,” have the die diagnostics that are universally recognized as such by the hobby, especially when paying big money for these coins.  There even seems to be confusion and disagreement by recognized authorities, such as grading services and VAM variety experts, as to what die characteristics constitute “Zerbe Proofs” and “Zerbe Proof-like” 1921 Morgan silver dollars.  Again, for this and other reasons mentioned above, caution is advised when offered such coins, even with seemingly valid authentications.

Mark Ferguson is a specialist in precious metals investments and deals in all bullion products currently traded in the market. If any products or services mentioned in this article are of interest to you, Mark can be reached at 920-233-6777 or [email protected]. Mark Ferguson has been dealing in rare coins and precious metals nationally since 1969. He has written feature articles and regular columns for Coin World, Coin Values magazine, The Coin Dealer Newsletter, Numismatic News, The Numismatist, ANA Journal, and the British publication, Coin News, and currently writes a weekly column for CoinWeek. His website is www.MFRareCoins.com, where additional research information about precious metals is available.