How does a person become fascinated with silver dollars? Growing up in a place such as Helena, Montana where Morgan and Peace dollars were a part of daily life meant that Wayne Miller was constantly exposed to the hefty coins at an early age.

“Montana was one of five states where silver dollars were used regularly,” he said. “You were considered a sissy if you used paper $1s.”

Ironically, it was copper that put Miller on the path to a career in numismatics. 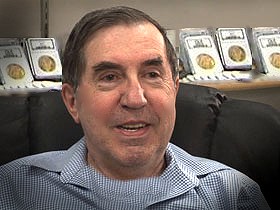 “My grandfather had a tackle box full of old Lincoln and Indian cents,” he recalls. “There was an 1816 large cent in the bunch, and it was the most amazing thing I’d sever seen. When I was in high school, I used to work as a pinsetter and put some of the money aside for coins. Tons of New Orleans Mint dollars were shipped to Montana in 1962, including 50 bags of the 1903-O. It fell from ‘$1,500 to $7.50 .”

Miller set collecting aside while pursuing a BA in social work, but he returned to coins while still in school.

“I went to Washington, D.C. to get my master’s degree,” Miller said. “I visited a coin shop in Washington and started getting the bug again, and I began taking orders for customers. Silver certificates couldn’t be redeemed for silver after June 24, 1968, so I spent a year buying them.”

Even though he was a small fish in the coin business at that time, Miller made a bold and historic decision in 1968.

Most of the coin photos in Miller’s first book on silver dollars came from his collection. Information from the Redfield hoard was included.

“I knew I was going to write a book someday when I was six years old,” Miller said. “I didn’t know it was going to be a coin book.”

The surging rare coin and bullion markets of the late 1970s helped provide Miller with the funds to build his collection. The numbers from 35 years ago are staggering, even by current standards. The Miller collection was sold privately in 1983 before turning into the Wayne Miller/Hoagy Carmichael auction conducted by Superior Galleries in January 1986. Assembled in the days before third-party grading, Miller described some of his more memorable purchases.

Some might say Miller unloaded his famed collection too soon, as many of the coins soared in value after the set was dispersed. Aside from the natural tendency to sell a collection once the goal has been achieved, there was an important reason to promptly convert the coins to cash.

Half the proceeds of the sale went to build and fund the God’s Love homeless shelter in Helena. The charity is run by Miller’s wife Ann along with qualified staffers. God’s Love is in its 28th year of operation, and it was the subject of a Religion & Ethics segment on PBS-TV. That program is available for viewing on the internet.

Sincere concern for the less fortunate is a Miller trademark. This is a man who can passionately denounce wasteful government spending, speak about the need for sound money and follow up with observations on the plight of working-class Americans.

“I’m a bleeding heart conservative,” Miller laughed. “It’s unbelievable to hear about the amount of abuse some kids go through.”

Four of the Millers’ nine children are adopted, and the family includes 22 grandchildren and 23 great-grandchildren.

Being associated with a shelter gives Miller a street-level grasp of the current state of the U.S. economy, and his view isn’t sunny.

“The shelter has room for 40 beds, and there are another 20 people sleeping on the floor. People come in all the time to get enough for a co-pay on their prescriptions or for gas money to get to work. The gutting of the middle class is the worst thing that has happened in the past 30 years.”

“The market is now driven by bullion and people who want the finest known coins,” he observed. “The past five years has been the first and most prolonged weakness in the silver dollar market I’ve seen. MS-67s are weaker now than when silver was $6 an ounce.”

An uneven market in his trademark coins has spurred Miller’s creativity, and he handles a wide range of other series from pre-1933 U.S. gold to more modern issues.

“You have to be nimble to keep track of things today,” he said. “We have a lot of goofy things in the the shop. I paid my grandkids to go through bags of half dollars from the bank because I suspected there were a lot of uncirculated Kennedys. We sold the rejects for 49 cents each and made a profit on the rest. We just sold $10,000 worth of cull type coins.”

Miller currently advises customers to buy silver based on its ratio with gold and the federal government’s ever-rising deficits. Between his coin shop and involvement with the God’s Love shelter, retirement isn’t in Miller’s future plans.